1. Calgary taxi driver returns bag with more than $10,000 cash inside

Calgary cab driver Mohammad Khawaja is being praised for his honesty after returning a bag filled with over $10,000 to passengers who left it behind. Khawaja picked up a mother and her son from the Calgary airport and dropped them off at their hotel. He proceeded to help them unload their luggage from the trunk. However, no one realized that there was a gym bag forgotten under the front passenger’s seat. Khawaja ended his shift and the driver that took over noticed the gym bag.

He returned it to Khawaja’s family thinking that it belonged to the cab driver. Khawaja did not recognize the bag but he opened it and found an ID. He realized that it belonged to the woman he dropped off at the hotel the night before. Khawaja also found over $10,000 in the bag. The cab driver immediately contacted his supervisor to figure out how he could find the family. Eventually, the family was tracked down and the bag was returned to them.

“Things like phones or small things always happen — I’ve been driving the last years 13 years. Big things like that? Never,” Khawaja told Metro News Calgary. “To be honest, I feel so good. I’m happy for my company, too. I did something good for the company and the city of Calgary.”

2.  Boy born without ears gets a new pair after receiving rare surgery

Eight-year-old Elijah Bell was born without ears, but thanks to a rare surgery he has received a brand new pair. Doctors used cartilage taken near Bell’s ribs to remake his newly constructed ears. The little boy was born without ears due to a genetic defect known as bilateral artesia microtia. Despite the defect though, he was able to hear, but without fully developed ears sound was not able to properly transmit into his skull. After receiving the surgery, Bell is overjoyed about his new ears. “He loves them; he’s realty proud of them and shows his ears off to everyone,” his mother Colleen said.

A Washington State lawyer is stepping out of his office to help fight wild fires in his county. Alex Thomason recently bought a fire truck for $5,000 and took a four-hour course in order to help firefighters put out flames taking over the area. Although some people think the lawyer is taking a big risk putting out fires as an amateur, Thomason says he feels obligated to help his neighbours. He also has a crew of people helping him that he was able to connect with via Facebook.

“Some guys ask ‘who is paying you?’ Well nobody. We are just doing this for free out of my own pocket because, you know, these are people,” Thomason told reporters.

4. Woman adopts stray dog that saved her while on vacation in Greece 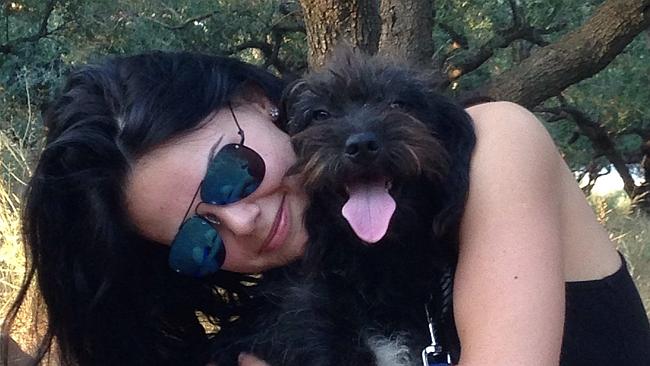 Georgia Bradley was enjoying her vacation on a beach in Greece when things took a dark turn. While her boyfriend was grabbing food at a nearby café when two men approached Bradley and started harassing her. “I decided to go for a walk along the beach, and found two Greek men who kept harassing me to go out for a drink,” Bradley said. “I kept telling them I didn’t want to.” Then, one of the men grabbed her arm and Bradley began to panic. All of a sudden, help arrived to save Bradley. However, it was not a police officer or Good Samaritan that scared off the intruders; it was a small black dog.

The dog ran over and started barking at the men, who proceeded to run away. The dog, who Bradley calls Pepper, followed her back to her apartment. Bradley tried to get the local animal shelter to take in Pepper but they were not able to. Bradley and her boyfriend had to return back home to the U.K. and leave Pepper behind, but she could not stop thinking about the dog. So she returned to Greece two weeks later and searched for Pepper for more than a month. Eventually, she found Pepper at the same beach where she was being harassed. After confirming with the local shelter that the dog was a stray, Bradley took the pup back to the U.K. so she could adopt it. “It has been such a crazy journey, but I am over the moon. Pepper has settled in brilliantly,” she said. 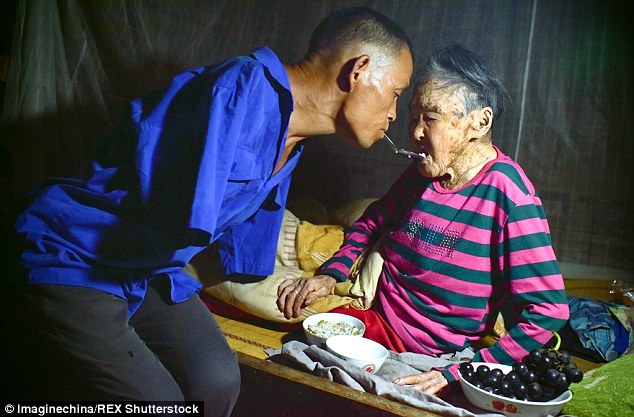 The story of a 48-year-old disabled man’s devotion to his mother is making headlines in China. Chen Xinyin lost his arms to an accident involving electric shock when he was only seven-years-old. Since then, he has learned to do almost everything without his arms. Now, he is helping take care of his bed-ridden, paralyzed 91-year-old mother. A series of photographs capturing Chen Xinyin’s daily life show how he spoon-feeds his mother everyday, using his teeth. He also cooks, peels corn, weaves baskets and tends to his family farm using only his feet. However, it is Xinyin’s selfless love for his mother that truly has people in awe. 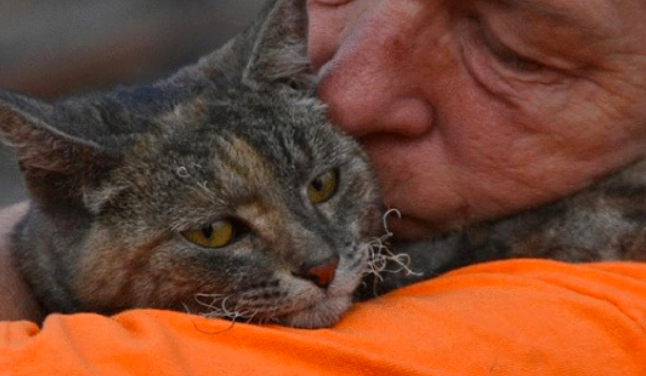 Ruthie Rosemary is a tabby cat that truly has nine lives. Last week in northern California, a wildfire spread through Trinity County. Ruthie’s owners, Debi and Jeff Brusatori, were forced to leave their home. They packed everything, including the cat, into their van and drove off hoping to escape the fire as soon as possible. Unfortunately, Ruthie jumped out of the window of the van right as the Brusatoris were driving off.

They saw the cat jump but could not turn back because the flames were getting closer and they had no choice but to drive off. Debi and Jeff were heartbroken that they left Ruthie behind. The couple returned to their home five days later once the blaze had been put out. As they approached their damaged property, they suddenly heard a familiar ‘meow.’ Ruthie was hiding under the couple’s burnt pickup truck. The cat amazingly survived the fire with no injuries and the Brusatoris are delighted to have their beloved cat safe and sound.

7.  Family adopts dog that nobody wanted because of its “unusual” looks 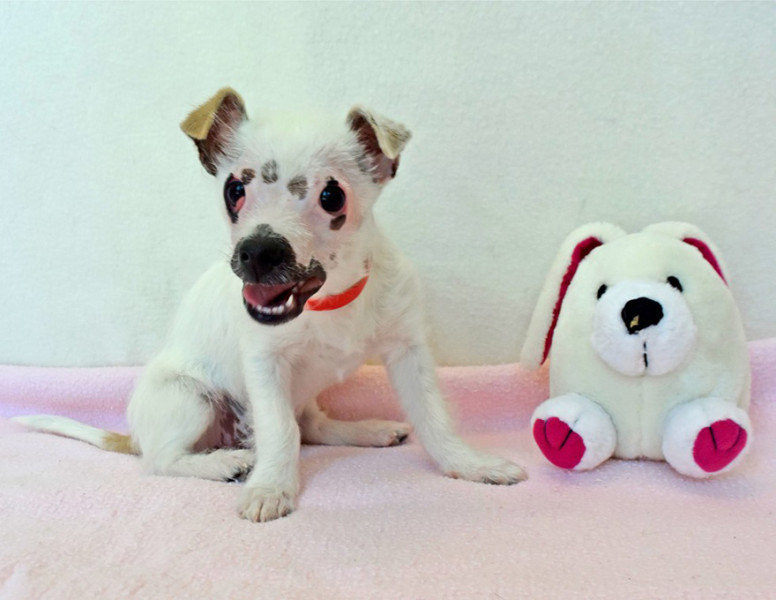 While most puppies that arrive at the Humane Society of Silicon Valley get adopted very fast, Little Lisa, a 10-week-old West Chihuahua mix, was not experiencing the same kind luck. Little Lisa was born with physical deformities and many people passed on adopting her because they felt she was not “cute” enough. However, when Christine Doblar and her daughters came to the shelter, they knew right away that Little Lisa was the puppy for them.

The family’s pet Chihuahua had recently passed away and they were looking for a dog to accompany their chocolate lab named Pele. When Little Lisa saw Doblar and her daughters walk into the shelter, she immediately ran up to them and greeted them with kisses. The family felt that Little Lisa would make a perfect addition to their home. Now, the puppy is happy, healthy and loving her new life with her new family. 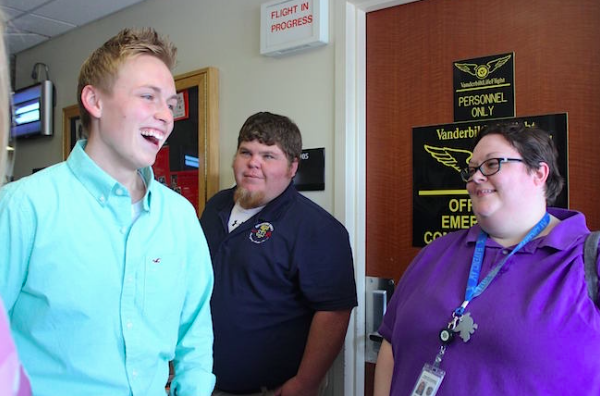 Sam Ray was working on his pickup truck when the jack holding up the 5,000 pound vehicle suddenly collapsed, trapping Ray underneath. The 18-year-old tried calling for help but no one could hear him. Luckily, Ray had his iPhone in his back pocket and the pressure of his behind on the phone activated Siri. Ray heard Siri’s voice and asked her to call 9-1-1. At first, the dispatcher just thought that Ray’s call was a “butt dial” but then she heard screams for help in the background. Rescue crews rushed to the scene and the vehicle was lifted off Ray. He suffered from broken ribs and a bruised kidney but he is expected to make a full recovery.

9. Man plants 400 acres of sunflowers in tribute to his late wife who died of cancer

A Wisconsin man is honouring his late wife with thousands of sunflowers. Babbette Jaquish passed away last year from cancer at the age of 66. Her husband, Don, wanted to do something special in tribute to his late wife. So he decided that he was going to plant 400 acres of sunflowers in her honour. Sunflowers were Babbette’s favourite, and members of her community fondly remember her as the ‘sunflower lady.’ It took 75 days for the flowers to finally bloom, but now they are growing tall in a field on the side of the local highway. Don is planning to sell the sunflower seeds and donate the money to local hospitals to support their ongoing cancer research. “Everyone that ever met Babbette fell in love with her,” Jaquish told reporters. “I was just lucky enough to be the guy that she fell in love with.”