1. Student commended for comforting special needs stranger on the bus

Godfrey Coutto was on the 10 B-Line Express bus in Hamilton, Ontario, when a stranger approached him and tried to shake his hand. Coutto decided to do the nice thing and shake his hand back, but the stranger, whose name is Robert, held on. “I was like, ‘Yo, what’s going on? Am I getting pranked or something?’ I wasn’t. I looked at him [and realized] he’s special-needs,” Coutto explained to Global News. Robert wanted to hold Coutto’s hand during the entire bus ride.

At first, the McMaster University student felt a bit uncomfortable, but he realized that Robert meant no harm and just wanted to feel at ease by holding someone’s hand. Robert’s family told reporters that he has cerebral palsy and is deaf. They said the crowded bus ride was making him uneasy, so he approached Coutto to find comfort. While Coutto thought that his act of kindness was not a big deal, someone else on the bus did. They snapped a picture of Coutto holding Robert’s hand and the image instantly went viral. “Sometimes you just have to be selfless and put someone else’s needs above yours,” Coutto said.

2. Mother and daughter save tarantula crossing the road in Ottawa

While many people would run away in fear if they saw a tarantula cross the street, Anne Beck and her daughter Julia decided to save one they found earlier last week.

The pair was driving home, when Julia spotted a furry, eight-legged creature. Julia got out of the car and realized it was a tarantula. Anne waited with the tarantula while Julia went home and got a cooler to keep the spider in while they tried to figure out what to do with it. They called a local reptile zoo, which deals with exotic animals, and asked for their help in finding the spider’s home.

The zoo managed to get in touch with the owners of the tarantula who said their pet escaped while they were doing some home renovations. They say they are grateful to Anne and Julia, who were brave enough to help make sure their tarantula got home safe and sound.

3. Community members work together to help local farmer with terminal cancer plant 450 acres of crops in a day

The small community of Galva, Illinois, is working together to help a resident with terminal cancer. In a Facebook post, Jason Bates explains that his cousin Carl has been diagnosed with cancer. Carl is also a farmer, who cannot continue working because the disease has left him very weak. The news about Carl circulated across town, and a few days later community members and fellow farmers decided to surprise him by working together to plant his crops. Using 16 semi trucks and 12 grain carts, they managed to harvest all of the crops on Carl’s 450 acre farm in less than 10 hours. 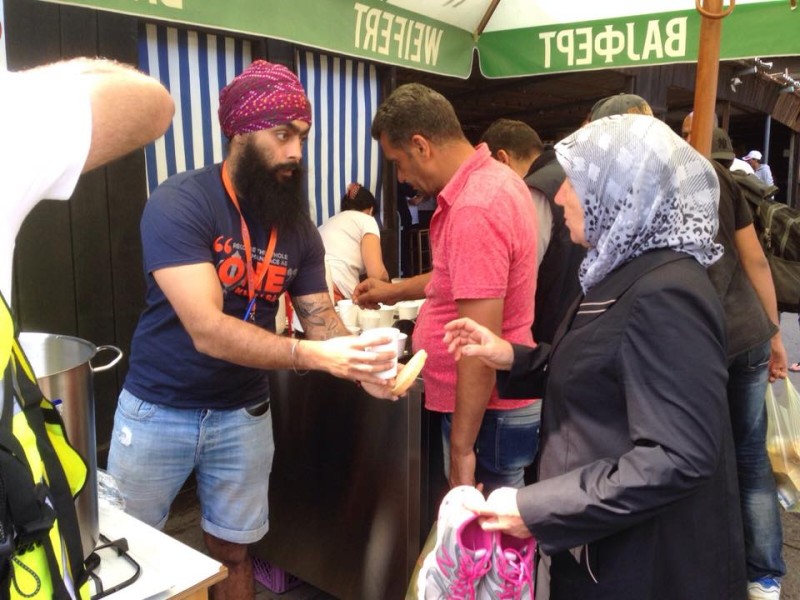 A Sikh-aid organization has set out to feed more than 14,000 Syrian refugees, every day. Langar Aid, is a branch of Khalsa Aid – an international NGO humanitarian agency that is based on the teachings of the Sikh faith. One of the primary principles of Sikhism is langar – where food is served at any Sikh temple, for free, to anyone of any background.

Langar Aid has taken the concept of traditional langar to a refugee camp in Duhok, Kurdistan, located less than 10 kilometres away from Syria’s border. Langar Aid has been feeding thousands of refugees everyday for several months. “We set up a bakery at a refugee camp for Yazidi people to provide a self-sustaining solution. Support in the form of food for distressed people has been there for over a year now and organizations from Sweden are helping run the bakeries. Help is also pouring in from Serbia and Greece,” Indy Hothi, a member of Langar Aid, told The Times of India.

When choosing the best man for his wedding, U.S. Army Veteran Justin Lansford did not have to think twice about who would do the best job. Lanford lost his leg in an explosion while serving in Afghanistan, and ever since then his service dog Gabe has been at his side. Lansford picked Gabe to be the best man at his wedding because the golden retriever has been a loyal friend, helping him heal from the emotional and physical trauma experienced after he returned home from Afghanistan. “Since day one, we’ve been joined to the hip. It meant the world to have him next to me. He’s there for me all day, every day,” Lansford told New York Daily News.

6. Kitten with no back legs receives special wheelchair developed by students in Langley

Cassidy the kitten was found abandoned in the woods with no back legs. Now, the kitten is walking normally with the help of a special wheelchair developed by two grade 12 students from Walnut Grove Elementary in Langley. Josh Messmer and Isiah Walker used a 3D printer to help build the wheelchair for Cassidy. Now the kitten is up and walking all thanks to his new set of wheels.

7. Paramedic responds to car accident in her wedding dress 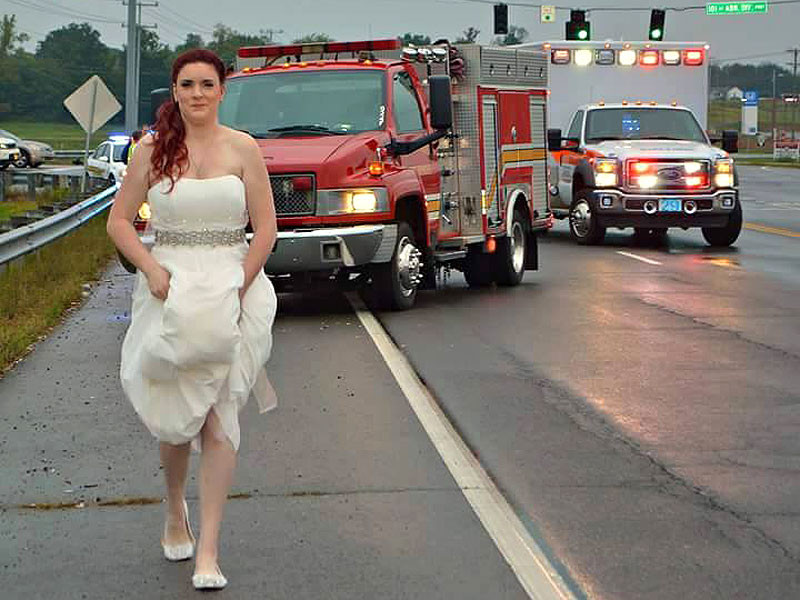 Sarah Ray had just tied the knot with her husband Paul, and they were on the way to their reception, when they received bad news. Sarah got a call telling her that her father and grandparents had been in a car accident on the way to the reception venue. Both Sarah and Paul are paramedics and did not hesitate to rush to the scene to help.

Sarah was still wearing her wedding gown, but she did not let that stop her from making sure her loved ones were safe. Luckily, no one was seriously hurt in the crash. “Anybody in the EMS field would’ve done the same thing. I don’t know that what I did was special. I was just making sure my family was okay… I just happened to be in a wedding dress,” Sarah said, according to People.

After ordering pizza from Dominos during a service, an Ohio church congregation decided to tip the delivery girl over $1,000 that was collected during the service offering. The congregation explained to the driver that the main message of their church was generosity and that was why they wanted to pass on the offering to her.

Two students at Elon University in North Carolina decided to surprise their favourite campus coffee shop worker with a trip to Disney World. Lucy Smith-Williams and Taylor Zisholtz are regulars at the campus coffee stand and often stop to chat with Kathryn Thompson, who works as a server at the shop. One day, Thompson told the girls that her dream was to go to Disney World but she was unable to afford the trip. Williams and Zisholtz decided to set up a GoFundMe page for Thompson, where they raised nearly $7,000 to help make her dream a reality. The surprise was all caught on camera. Watch the video to catch the heartwarming moment.