1.  Elderly, disabled passenger brought to tears by flight attendant who helped feed him

Flight attendant Fan Xuesong spotted an elderly, disabled passenger struggling to eat his in-flight meal. So, she knelt down to help feed him. The 71-year-old passenger named Mr. Nui recently suffered a stroke and cannot hold his eating utensils. He was so moved by Fan’s kind gesture, that he began to cry. The heartwarming act of kindness was captured on camera.

Lindsay Peace got a tattoo of her young daughter on her arm several years ago. But her daughter never felt like a girl and recently transitioned to a boy whose name is Ace. Lindsay kept the tattoo but realized that she wanted to change it to represent Ace. So, she got her husband, who did the original tattoo, to redo it so it would look more like Ace. “Parents need to really support their kids in these situations. I thought he was happy before, but no — he’s happier now. It’s crazy. He smiles all the time,” said Ace’s dad, Steve, according to Metro News.

3. Couple buys stranger a new car after seeing him walk home from work

Sean Merill and his wife Darilyn were on their way home when they saw the local school janitor, Robert, walking home from work. The couple pulled over to offer the man a ride. On the trip home, Robert told them that he takes public transportation two and a half hours every day to commute to work. Sean and Darilyn were heartbroken after hearing Robert’s story and decided to find a way to get him a car. They set up a GoFundMe page to raise money for a vehicle and insurance. They reached their fundraising goal and surprised Robert with the car. “If it wasn’t for them, I’d be still riding the bus. I owe them a lot, and I’m going to do my best… to help somebody else,” said Robert, according to People.

The world’s oldest couple celebrated their joint birthdays this past week. Karam Chand turned 109 and his wife Kartari turned 102 on Sunday. The couple, who married in 1925, celebrated their special day with four generations of their family in Bradford, England. Karam and Kartari have eight children, 27 grandkids and 23 great grandchildren.

5. Students rally around fellow classmate who was bullied for having cancer

Fourteen-year-old Nicole Pfizer of Larendo, Texas, is battling leukaemia. Unfortunately, bullies at Nicole’s school posted mean comments and pictures about her on social media. One person wrote, “Knock, knock, who’s there ‘Not your white blood cells, that’s for sure,” under a picture of Nicole posted on Instagram.

Administration at Nicole’s high school were alerted and are dealing with the students who wrote the awful comments. In the meantime, Nicole is receiving a lot of love from her fellow classmates who rallied around and wore orange to show support for the teen. Orange is the school’s official colour and some of Nicole’s friends thought it would be a good way to make Nicole feel accepted despite the bullies’ hurtful words.

Seven-year-old Blake Pankonien was devastated when his dog, Cowboy, got ran over near his home. Two state troopers arrived on scene and Blake’s mom Allison told them what happened. The troopers said they would look into the case. A week later, Alison found a note from one of the troopers on her doorstep with a $50 gift card to Toys ‘R Us for Blake.

I’m sorry I was not able to find the culprit. Myself and Trooper Manning patrolled close to your house to make an impact. I hope things get better.

You said your boy was talking about this being the worst Christmas ever. No boy should ever feel like that.

I’ve attached a Toys ‘R Us gift card so he can get himself a video game or toy. 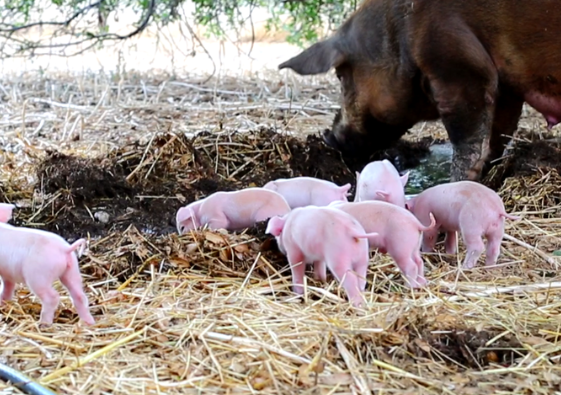 Rita the pig was riding in the back of a truck that was headed to the slaughterhouse. Rita was also pregnant at the time but she managed to jump off the truck before it reached the final destination. A passerby saw Rita on the highway and took her to Sacramento County Animal Shelter. The pig gave birth to nine healthy piglets at the shelter. Now Rita and her babies are living happily on an animal sanctuary.

A Salvation Army in Lowell, Massachusetts, received a massive donation when an anonymous donor placed a ring in a donation kettle. The ring was appraised at $3,500 and will be auctioned off this weekend to raise money to help families in need.

Jason and Carolyn Cooper’s service dog, Radar, was missing for four days. But out of complete luck, Jason found Radar and their reunion was caught on camera. Watch the heartwarming clip above.