1. Syrian refugees get to meet the Canucks

Thanks to your #CFKFTelethon donations, CFEC is able to help Syrian refugees receive a new beginning in Vancouver.https://t.co/LoMNfzGAnG

Young Syrian refugees and their parents got a meet and greet with the Vancouver Canucks last Saturday. The family members of Alan Kurdi were also in attendance. The image of two-year-old Kurdi’s body washed up on the shores of a Turkish beach resulted in global outcry about the Syrian refugee crisis.

“My team is Canucks, and I like to play goalie,” said Alan’s 15-year-old cousin Shergo Kurdi. He was among the 23 refugees visiting Rogers Arena. The families got to watch a game, tour the dressing room, and meet with the Canucks mascot Fin.

2. Elderly man receives thousands of messages of support after his dog passes away

After his dog died, a lonely man gets tons of internet love https://t.co/qjemzqIQuH pic.twitter.com/2gVU9bLdkc

Kurt Haupt of Toronto was devastated when his beloved dog Dacky was mauled to death by four larger dogs at the park. The 81-year-old has spent most of his life alone and Dacky was his best friend.

Local resident Sue Dustan heard about Dacky’s tragic death and wanted to do something to help. She set up a GoFundMe page to collect donations for Haupt. To date, over $3,500 has been raised for Haupt to help him get a new dog. Strangers have also been getting in touch with Dustan asking how they can send sympathy cards to Haupt.

“I’m grateful for these people. [Sue] calls me everyday and she helps me a lot. We talk about other things to help me get over it,” Haupt told ABC.

3. The world’s cutest preschool is a place where baby orangutans learn and play

The International Animal Rescue (IAR) has set up a “forest school” where rescued baby orangutans can learn how to survive in the wild. The baby orangutans arrive at the school in a wheelbarrow and then they get to play all day. This is definitely the world’s cutest preschool. 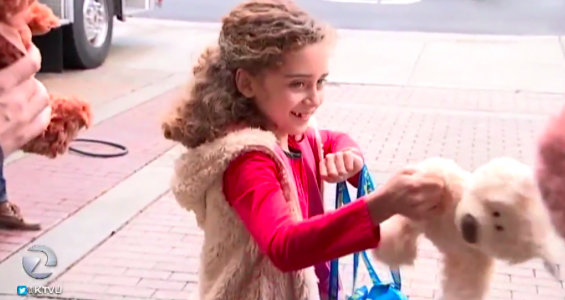 Second-grade student Lilly Fernald wanted to give back to her community for her eighth birthday. So, she decided to ask friends to bring stuffed animals to her birthday party instead of gifts. Fernald donated the stuffies to her local fire department so they could be given out to help comfort children in distress. 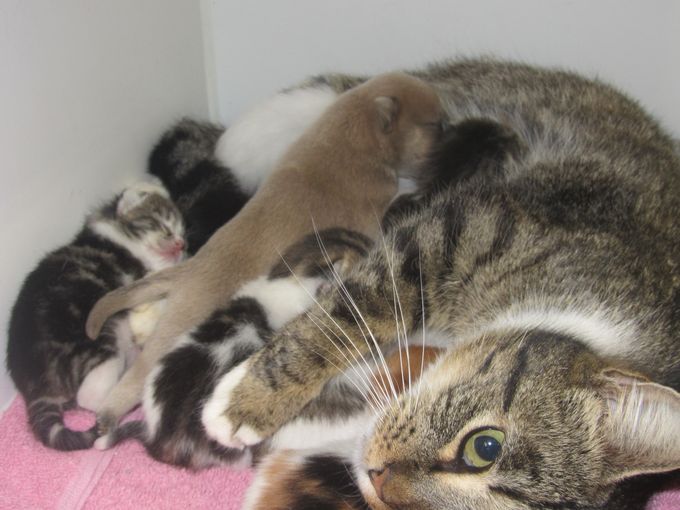 The staff at LaGrange Animal Shelter were worried they would not be able to find a loving family for two puppies. The puppies lost their mother after she was hit by a car.

Staff members at the shelter placed the puppies with two mother cats that recently gave birth. It turns out that the puppies have fit right in with the cats and they have formed a family.

“Each mother cat took the puppies in as her own,” said Animal Services Supervisor Officer Chris Bussey. He said that the kittens see the puppies as siblings. “They’re all just sleeping together. It’s just another brother or sister to them.”

6. Starbucks announces it will donate all leftover food to those in need

Starbucks will donate all of its unsold food to America’s needy https://t.co/WMm3tg8xKJpic.twitter.com/g7wKJjpNwR — Fortune (@FortuneMagazine) March 22, 2016

Starbucks stores in the U.S. will be donating all leftover food and meals to food banks across America. The coffee giant will team up with the Food Donation Connection and the Feeding America program to ensure that no meals go to waste.

Starbucks estimates that it will donate over five million meals at the end of its first year participating in the meal share program.

Andrea Diaz recently received a cochlear implant allowing her to finally hear. The first thing she heard was her boyfriend proposing to her: “I wanted to make one of the first things that you hear is me asking you to marry me,” said fiance Kevin Peakman. Watch the heartwarming proposal in the video above.

Kelsey Harmon was excited to visit her grandfather for dinner last Friday. Five of her cousins were also supposed to attend but didn’t show up, so Harmon tweeted a photo of her grandfather looking heartbroken.

“Dinner with pawpaw tonight […] he made 12 burgers for all 6 grandkids and I’m the only one who showed. love him,” Harmon wrote in her tweet.

The tweet went viral and many people messaged Harmon telling her how the picture motivated them to visit their grandparents. Thankfully, “Pawpaw” is not upset and he said there was just a miscommunication between him and his grandkids about the dinner.

Great story from Tools in Motion in Airdrie; Local businesses like these make this city great! #yyc#smallbusinesshttps://t.co/S83byT0Vd3

A mechanic shop has stepped up to help a Calgary mother battling breast cancer. Chris Restall took her car in for repair at Tools in Motion in Airdrie, Alberta. Her car was in desperate need of some TLC, and the mechanics decided to take care of all the repairs worth $2,500 for free.

“They definitely went above and beyond… I was very shocked, and I was quite pleasantly surprised,” Restall told the Calgary Herald.