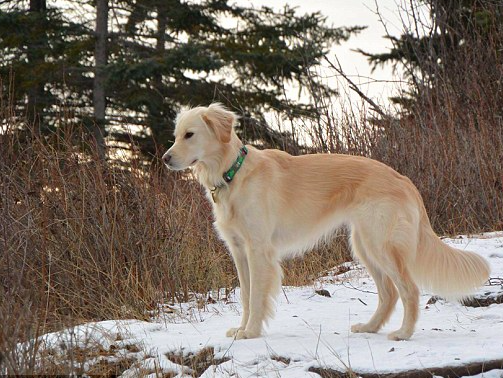 It was beginning to get dark, so Kerrie and Pam went home, but the next day they called Minnesota Department of Natural Resources for help and they were able to find the eagle by tracking down its footprints in the snow. The eagle was taken to an animal rehabilitation, where it received proper treatment for a soft tissue wound on the left shoulder. Thanks to Kenai’s diligence, the bird is on the road to recovery. 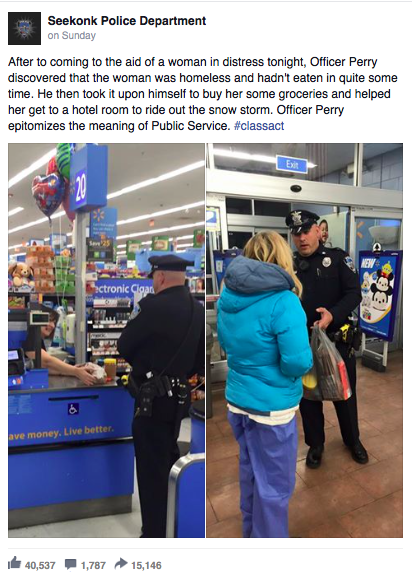 The kindness of a New England police officer is going viral after he helped a homeless woman find food and shelter before a winter storm. According to a post by the Seekonk Police Department, Officer Perry found the woman in distress and bought her groceries and found her a hotel room so she could stay warm during the storm.

3. World’s largest blanket created to help the sick and homeless

Over 2,000 women gathered together to crochet the world’s largest blanket to help keep thousands of people warm. Mother India’s Crochet Queens (MICQ) is an organization that operates out of Chennai, India. They asked women from all over the world to help with the project, and in six months, 2,472 women crocheted blankets. On Sunday, all of the individual blankets were stitched together, and spanned over 120,000 square feet, breaking the Guinness World Record for the biggest blanket in the world. The blanket will be broken down into individual pieces and sent to people in need.

4. Dog rescued after being trapped in sinkhole for 72 hours

SPFD performs a dog rescue after he falls in a sink hole. Been missing for 72 hrs. Glad family is back together! pic.twitter.com/2gpM1mYFXv

After being trapped in a sinkhole for 72 hours, Maverick, the 12-year-old German Shepard, has been reunited with his owner Lisa Van Valkenburgh. Maverick went missing on February 4 and the Van Valkenburgh family began to search for their lost pup right away, however, they started to lose hope as the days passed.

That all changed when Lisa was walking close to her home and heard a faint whimpering coming from the ground. She began to investigate and found a sinkhole on the side of the road. Van Valkenburgh immediately knew it was Maverick. Rescue authorities were called and Maverick was safely pulled out of the sinkhole. The German Shepard was taken to the local animal hospital immediately because he was extremely weak and dehydrated. Fortunately, Maverick is on the road to recovery and returned home to his loving family last Wednesday.

If you need a daily dose of cute, this video will definitely make your day. This baby can’t tell who is who between his dad and his uncle (who happen to be twin brothers) and it is absolutely adorable.

Will Siever is the student manager Vincennes Rivet High School basketball team in Indiana. Siever, who also has Down syndrome, is one of the most enthusiastic members of the team, and recently he had his moment to show off his skills on the court. During halftime at a recent game, he managed to sink a half-court shot and his reaction will put a smile on your face.

When workers at Kennelgate Pet Superstores warehouse in Stapleton, England, noticed that the alarm kept ringing in the facility at night, they were keen on catching the culprit. They finally discovered that the commotion was caused by a cat living in the warehouse. The cat was micro-chipped and its owner was contacted. It turned out the cat, named Clive, had been missing from his home for over 14 months, according to his owner Tanya Irons. Somehow, he ended up living in the warehouse, where he also had access to unlimited snacks. “I can’t believe he’s so porky,”  Irons told BBC. Clive is now back at home and most likely on a diet.

In an amazing rescue, Indian soldier Lance Naik Hanamanthappa was found alive after being trapped under a 10-metre avalanche for six days. Hanamanthappa was stationed at a military outpost located on the Siachen glacier in the Indian region of Kashmir. The avalanche hit on February 3 and nine of his colleagues were found dead. Rescuers were able to miraculously pull Hanamanthappa out from the heavy wall of snow. He was taken to a hospital in New Delhi where he remains in critical condition.

9. Mother and daughter reunited after 82 years

This heartwarming story proves that anything is possible. Watch as 82-year-old Eva May is finally reunited with her 96-year-old mother Lena Pierce. Eva May was taken away by social services when she was born because Pierce had her when she was just 13 years old. After decades spent apart, Eva May and her mother finally got to meet for the first time.