Henry Dueck spends a few hours every day shoveling heavy piles of snow off the entire block in his Winnipeg neighbourhood. The 76-year-old takes his job very seriously and for a very important reason. His wife has multiple sclerosis and uses a wheelchair. For Dueck, he is not only helping his neighbours but also making it easier for his wife to travel outside. 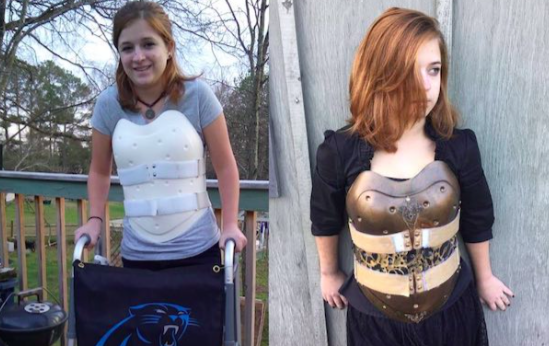 After being involved in a car accident a few months ago, doctors told 17-year-old Maddie Cable that she had fractured her T12 vertebra. In order to heal her injury, she would have to wear a back brace for at least six weeks. Maddie said she felt self-conscious about the brace until she decided to change it into a fashion statement by ‘steampunking’ it. Steampunking is a subgenre of science fiction that is aesthetically inspired by 19th-century industrial steam-powered machinery. Maddie and her friend worked together to steampunk the brace, transforming it from a boring looking piece of medical equipment, into an eye-catching fashion statement. “I enjoy wearing [my brace] now. it makes me feel more confident.” Maddie told BuzzFeed.

3. This adorable video of a little girl and her pet Bulldog will make your day

This video takes the top spot for the cutest thing on posted on the internet this week.

4. Nurse goes out in blizzard to bring snow indoors for sick kids

When Sick Girl Can’t Leave Hospital to Play in the Snow, Nurse Brings the Snow to Her! https://t.co/kVobXvvKbi pic.twitter.com/Lo4U06hqzG

Clinical research nurse Alex Classen did not let a blizzard stop her from putting smiles on the faces of young patients at the National Institutes of Health Clinical Center in Maryland. Classen noticed that seven-year-old Lucy Weise was staring longingly outside the hospital room window looking at the snow falling. Lucy was recovering from a bone marrow transplant and there was no way she could go out to enjoy the winter weather. So Classen decided to run outside in her scrubs and bring buckets of snow indoors for Lucy so she could play with it. Classen then returned to collect more snow for other children in the hospital ward. “Anything I can do to make these kids smile is awesome. So whenever they’re happy, it just makes my day,” Classen told The Washington Post.

Heather Clark was devasted when her seven-month-old son Lukas died after being abused by his babysitter’s boyfriend in 2013. However, Clark was able to hear Lukas’ heart beat again, inside four-year-old Jordan Drake. Clark donated her baby’s organs after his death and Jordan received his heart. Clark was overcome with emotion when she met Jordan and her mother Esther Gonzalez at Phoenix Children’s Hospital on Friday. “We’re family now, we’re friends now, our families are families, we’ve brought our families together,” Gonzalez told Fox 10 Phoenix.

6. Strangers form human chain to save trucker hanging off steep hill after accident

Matthew Collins was driving through a snow storm on a Pennsylvania highway last week when two cars in front of him swerved out of control. This caused Collins to hit the breaks on his big rig truck, sending the 18 wheeler over the guardrail. The truck was hanging over a hillside and Collins was sure he was not going to make it out alive. Luckily, Collins was able to escape from the truck and when he made it out of the cab, he was amazed to see a human chain leaning over the guardrail ready to help him up the steep hill. Good Samaritans stopped their cars on the side of the highway in order to assist the truck driver. “It’s nice to know that there’s people like that out there still,” Collins told WTAE News.

7. Dog goes outside to pee, ends up coming seventh place in a half-marathon 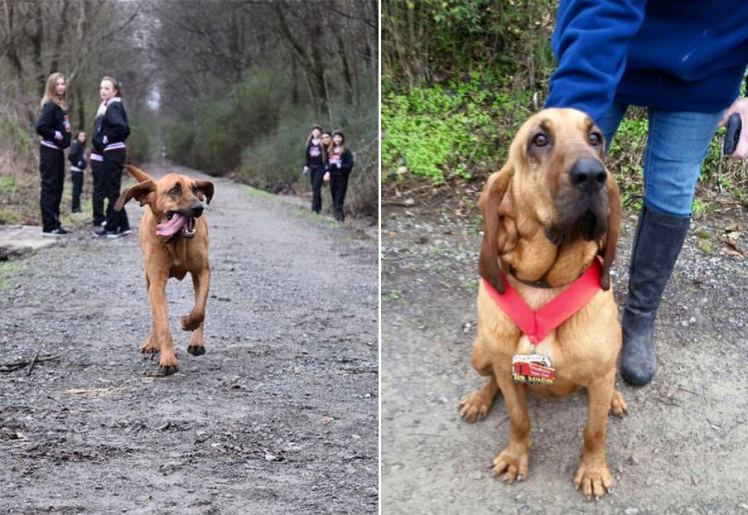 When April Hamlin of Elkmont, Alabama, let her dog Ludivine outside to pee, she was not expecting the two-and-a-half-year-old bloodhound to place seventh in the local half-marathon. But, that is exactly what Ludivine did. It turns out that after peeing, the pup wandered to the starting line of the Trackless Train Trek Half Marathon. Ludivine ran the entire course and crossed the finish line in seventh place with a time of 1:32.56. “I can’t believe [Ludivine] ran the whole half marathon because she’s actually really lazy,” Hamline told Runner’s World.

The world’s youngest pair of conjoined twins were successfully separated, eight days after they were born. Doctors in Switzerland performed a five-hour operation to remove the tissue connecting the girls at the liver and chest. The surgery was very risky and medical staff did not think the girls would make it. “We were prepared for the death of both babies, it was so extreme,” Barbara Wildhaber, a paediatric surgeon at the Geneva University Hospital, told Le Matin Dimanche. Luckily, the surgery was a success and the twins are recovering well.

9. Young Afghan boy who fashioned soccer jersey out of plastic bag will get to meet Lionel Messi

Last month, a picture of five-year-old Murtaza Ahmadi wearing an Argentina soccer jersey fashioned out of a plastic bag went viral. The little boy lives in the impoverished province of Ghazni, Afghanistan, and wanted nothing more than to meet soccer star Lionel Messi who plays for FC Barcelona and the Argentinian national team. Ahmadi’s older brother Homayoun cut holes into the blue and white striped plastic bag for his younger sibling to wear. “We can’t even imagine buying the original Messi jersey. We just can’t afford it,” Homayoun said in an interview with Al Jazeera.

Now, the little boy’s dreams are coming true because the Barcelona and Argentinian football clubs have arranged a meeting with Messi and Murtaza. “The date and the venue is still not confirmed yet, but there are chances of Ahmadi flying to Spain to meet his idol,” said Syed Ali Kazemi, a representative for the Afghan Football Federation.