1. College student uses couponing skills to help those in need 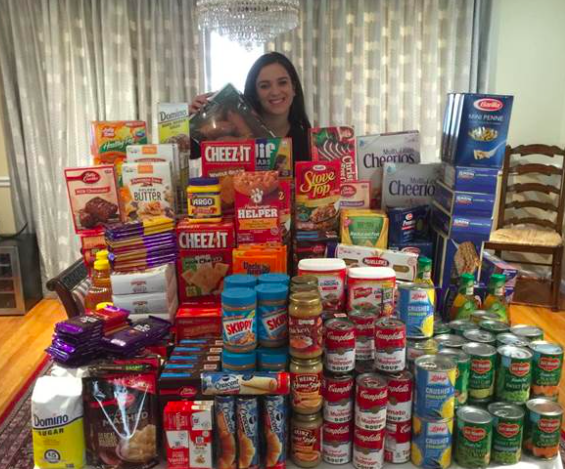 Twenty-year-old Hannah Steinberg has had a passion for couponing since she was 10. Now the college student from New York is using her couponing skills to help the less fortunate. Steinberg started a foundation called Our Coupons Care, and she uses donated coupons to purchase food and other supplies for homeless shelters and hospitals.

A  Syrian refugee won one million euros in a French lottery last week. The unnamed winner left Syria for Paris in 2011, where he got a job as a labourer. He bought a scratch lottery ticket at a local market and discovered that he was one million euros richer. Since winning, he has bought an apartment with some of the money and plans to use the rest to open his own restaurant.

When three-year-old Max Levy’s parents found out their son would need a metal disk surgically placed in his chest because he suffered from hemophilia, they were not sure how to break the news to him. Max’s father, Dan, came up with a great idea and told his son that he was going to have a metal plate inside his chest to be just like Iron Man.

Ever since then, Dan and his wife have been using the hashtag #IronManMax on social media to update their family on Max’s progress. Marvel Comics came to hear about Max and reached out to his family. They told Dan and his wife they wanted to feature Max in one of their comic books. “I think it’s pretty cool being in a comic book. Like it’s really really cool,” Max, who is now six, told NBC News.

Dana Olsen has been planning her wedding for the past year. But six weeks before the big day, her fiancé got cold feet and left her. Olsen was left with a fully paid reception and venue and it was too late to cancel and get her money back. “After the shock of what had happened wore off, I started to think about what to do. It just felt really terrible and wasteful and awful to just have all that money and this beautiful event that wasn’t going to happen. I just couldn’t stand the thought of it being wasted,” she said, according to KREM2.

Olsen wanted to make the best out of what happened so she decided to team up with Mary’s Place Shelter in Seattle to do something special for the homeless women and children that were staying there. Olsen has arranged for 150 of the shelter occupants to come to her wedding. A local salon will give the women makeovers and donations of clothing have been pouring in so the guests can dress up. “I just want it to be really fun. I mean, if we can’t have a good night, I hope that they have a great time,” she said.

6. Man proposes to wife 148 times without her noticing

Ray Smith managed to propose to his girlfriend Claire Bramley 148 times without her noticing once. Smith secretly placed a small piece of paper that read “Will you marry me?” in 148 pictures he took with Claire. Smith put together a montage of all the photographs to actually pop the question. Of course, she said yes.

“Kindess walls” are popping up all over Iran. Clothing, blankets, and shoes are being hung on random walls. Instructions on the colourful walls tell people to leave what “they don’t need” and take something if they need it.

As Syrian refugees continue to arrive in Canada, they are experiencing a lot of new things, like playing in the snow. Watch the video to see smiles on a Syrian refugee family as they have some fun tobogganing in Armour Hill, Ontario.

9. Target employee praised for his kindness towards elderly customer

Ishmael Gilbert is a clerk at a Target store in Indianapolis but he is gaining notoriety for his simple act of kindness. When a tiny, elderly woman approached his till the other day, 19-year-old Ishmael did not expect her to pay for her items in loose change. As she tenderly took out the coins from her purse, Ishmael did not lose any patience. The young clerk’s kind gesture has not gone unnoticed. Another customer managed to snap a photo of Ishmael thoughtfully assisting the old woman and the picture has since gone viral.