1. Abused puppy found with mouth taped shut on the road to recovery

A four-month-old terrier pitbull puppy found with its snout taped shut and broken hips is on the road to recovery after receiving surgery. The puppy was found on Christmas Day and rescue workers named him “Chance Christmas.” Chance was unable to eat, drink or breathe with the tape on his mouth and his hips were injured by blunt force trauma. Chance was sent into surgery on Sunday night in Chicago and is expected to fully recover. The rescue agency taking care of Chance hopes that someone will have the heart to provide the pup with the loving home he deserves.

An injured hiker stranded in a California forest was saved by a couple out on a New Year’s Day walk. Dan Reardon and Dina Zaky were hiking to Escondido falls when they came across an injured man named Mark Martinez who had rolled down a hill and couldn’t move. Reardon is a former doctor from the U.K. so he knew exactly what to do. He took Martinez on his back and carried him over 3.5 kilometres to the main road while Zaky tried to find help. “Out of nowhere he comes and offers to lend a hand by carrying him 2.3 miles. It was just amazing. I’m grateful. There’s no words to explain how I feel towards this guy. It was amazing what he did,” Martinez’s wife Lucero told ABC.

An anonymous donor in Utah is making renters in one affordable housing complex very happy. The donor paid $25,000 to cover rent for the entire complex for the month of January. A statement released by The Park Record Journal reported that the renters found out about the donation before Christmas:

Just days before Christmas, residents of the 38-unit Newpark Studios were notified that their January rent had been paid. Monthly rent for the entire affordable housing community is about $25,000 or $527-$709 per unit. Most of the tenants are service industry workers and young adults.

Two-year-old Scarlette Tipton has been through a lot. She was born with a rare form of cancer and when she was 10-months-old her left arm was amputated. For Christmas, Scarlette’s parents wanted to get her a pet kitten in order to lift her spirits during her recovery process. They managed to find Holly the kitten at a California animal shelter. Holly’s left front leg had been amputated and Scarlette’s parents immediately knew the cat would be the perfect pet for their daughter. The little girl was overjoyed to meet her new furry pal on Christmas Eve.

5. Pilot turns plane around to help family get to funeral

An Arizona family is expressing their gratitude to a pilot who delayed take off in order to make sure they got to the funeral of their father. Jay W. Short passed away from lung cancer in December, and his wife and children were desperately trying to catch their connecting flight in Minneapolis so they could arrive at his funeral in Tennessee the next morning. However, they only had seven minutes to get on board and when they reached the gate, the plane was nearing the runway. They were heartbroken to see the plane leaving without them as they knew they would miss the funeral.

“My son and I are waving our arms at the pilots and the ground crew as my two daughters are crying their eyes out. We are pleading for them to not take off,” said Jay’s wife Marcia Short in a Facebook post.

Airport staff told the family that they would not be able to make it on board. But suddenly, the plane turned around and headed back to the boarding gate. The plane’s pilot, Capt. Adam Cohen, saw the family panicking from the airport windows and knew that the flight must have been very important to them. He decided to turn back and let Marcia and her children on the plane and thankfully they were able to say their final goodbyes to Jay in Tennessee.

Although this good news story took place a few weeks ago, it is still worth a share. When Branden Bringham took his kids to play in the snow, they found a non-responsive kitten. With some quick thinking, the family was able to save the kitten and it was all caught on camera. Watch the amazing rescue.

7. Grandmother has priceless reaction when meeting her adopted granddaughter

Grandmother Eva Goeb was ecstatic when she met her newly adopted granddaughter for the first time. Goeb was not expecting her son Donny and his wife Miranda to show up for the holidays and she was very excited to see them. But she was completely overjoyed when she saw her granddaughter in Miranda’s arms. Watch her priceless reaction. 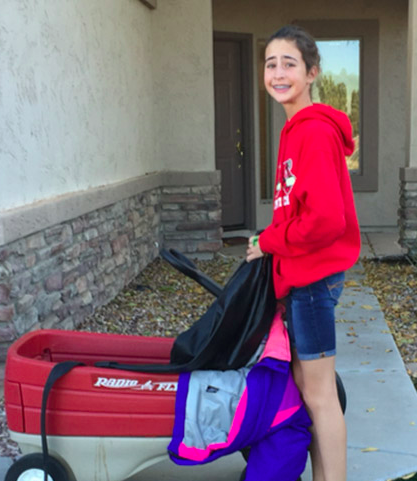 A 12-year-old Arizona girl put a smile on many people’s faces this holiday season. Makenna Breading-Goodrich walked door-to-door in several different neighbourhoods and collected over 1,000 winter clothing items for the homeless and donated them to the Phoenix Rescue Mission Shelter. “It gets really cold around here at night, like 30 degrees [Fahrenheit] and I want to make sure homeless people aren’t walking around without jackets or blankets at night! I just want people to know someone cares about them,” Makenna told People Magazine.

9. Little girl’s reaction to farting will make your day

We all could use a good laugh at the end of the day, right? This little girl’s reaction to farting has gone viral and will definitely leave you giggling. After all, kids say the darndest things.