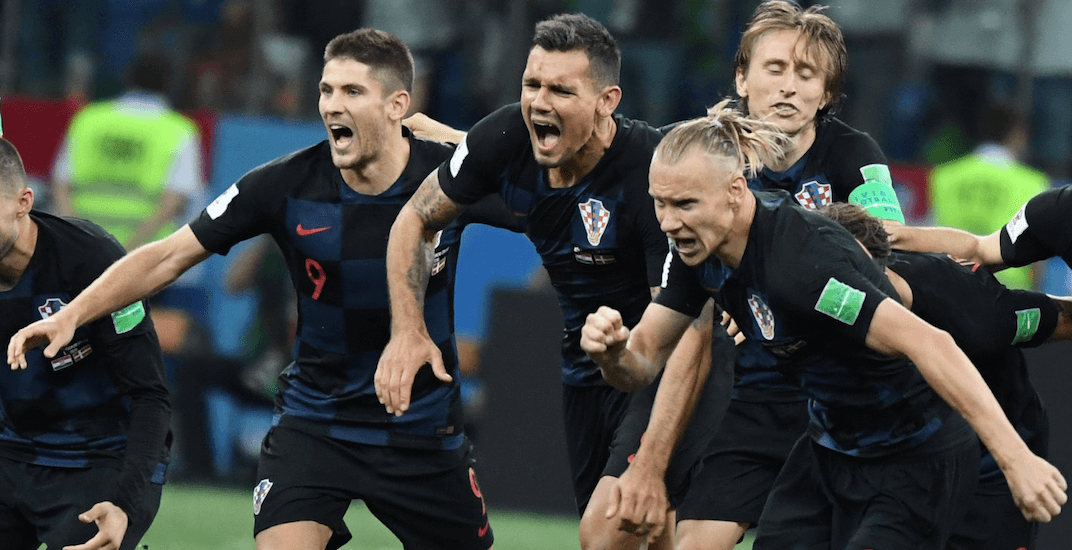 There has been no shortage of twists and turns at the 2018 FIFA World Cup, and Sunday’s matches were no exception. Both Round of 16 matches needed penalty shootouts to decide a winner, one of which produced a stunning upset.

Against all odds, the host Russians are into the quarter-finals after a shootout victory over Spain.

Spain opened the scoring courtesy of an own goal in the 12th minute, but Russia levelled the score before half time on a penalty scored by Artem Dzyuba.

GOAL!!!!#ESP takes the lead on one of the prettiest own goals you'll see…an accidental diving back-heel. #WorldCup pic.twitter.com/9grWgZYvoY

The hosts draw level with #ESP after being awarded a penalty kick…1-1 in the 1st half of Round of 16 match #WorldCup pic.twitter.com/uCOtMOSFSQ

The score remained tied 1-1, with the match eventually needing penalties. With the home crowd urging them on, Russia won 4-3.

The final save that ELIMINATED #ESP from the 2018 #WorldCup… pic.twitter.com/TqrUFxhZV9

Despite dominating the match, holding 75% of possession and carrying a 25-6 advantage in attempts at goal, Spain is going home.

The hosts, who many people picked to not make it past the group stage, will be one of the final eight teams standing for the first time since 1970.

The reaction in the media center in Samara to #rus advancing against #esp #worldcup pic.twitter.com/jUnITuDPaK

Denmark had a dream start in their match versus Croatia, with Mathias Jorgensen scoring in the opening minute. It didn’t last long though, as Croatia evened the game three minutes later, courtesy of Mario Mandzukic.

ANOTHER GOAL!!!#CRO follows up #DEN's quick goal with one of their own…all square at 1-1 FIVE MINUTES into the match #WorldCup pic.twitter.com/9PNxO6c2q7

The match went to extra time, where it looked like Croatia would win the match. But a miracle save by Kasper Schmeichel on Croatian captain Luka Modric ensured a shootout.

Both keepers were spectacular in the shootout, combining for five saves. Modric redeemed himself in a pressure-packed situation, scoring on his attempt to contribute to the 3-2 victory.

#CRO is moving on after Rakitic puts away the winning goal in the penalty shootout! #WorldCup pic.twitter.com/6uEWYThjGn

Croatia moves on to the quarter-finals for the first time since 1998, where they’ll meet Russia.

Round of 16 action continues on Monday, with a pair of tournament favourites, Brazil and Belgium, playing. Mexico and Japan will each try to pull off an upset.