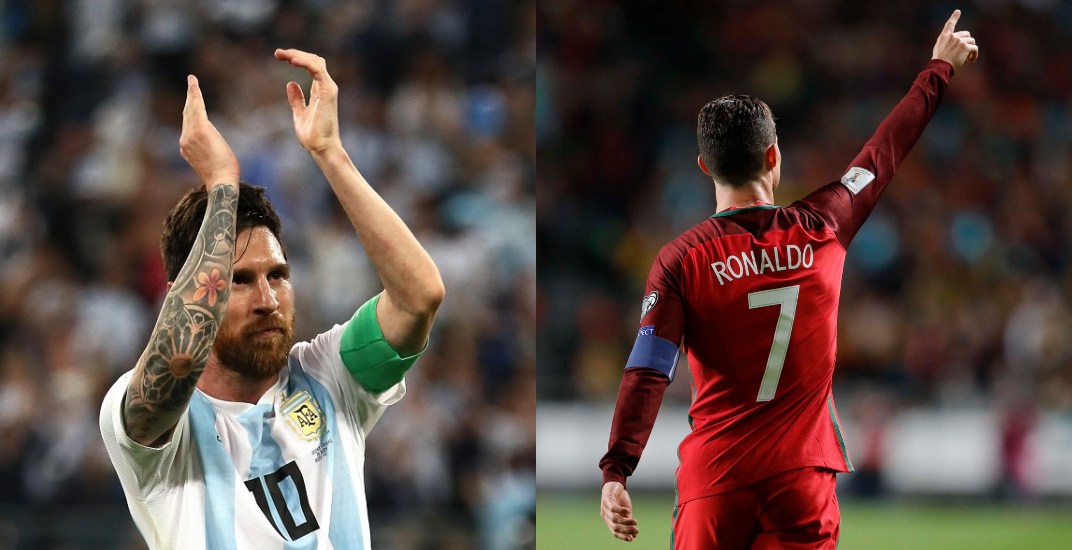 Messi and Ronaldo are going home.

Amazing, but true, as two of the greatest players to ever play the game are out of the World Cup after Argentina and Portugal were eliminated in the Round of 16 on Saturday.

We may just have witnessed two of the best soccer players in history, who are now in their 30s, play at the World Cup for the last time.

There’s no doubt that Lionel Messi is one of the best soccer players in history, but he’s never been as successful for Argentina as he has been for his club team, Barcelona.

Russia marks Messi’s fourth World Cup, and was the last chance for glory on the world stage for the 31-year-old Argentine superstar. He did not take advantage, with France winning a highly entertaining match 4-3.

Facing a determined French team, Argentina faced a tough challenge and were behind early after Antoine Greizmann scored a 13th minute penalty kick to put Les Bleus on the scoresheet first.

Argentina rallied and drew level just before half time when Angel di Maria scored one of the best goals we’ve seen at the World Cup this year.

Ángel Di María scores the equalizer for #ARG and it's easily one of the goals of the #WorldCup pic.twitter.com/WKqE2iBqOL

Even the eccentric Diego Maradona was impressed…

Checking in on Maradona after Argentina went up 2-1. pic.twitter.com/WprFuXwScl

Things were looking good for Argentina when Messi’s shot deflected off Gabriel Mercado and put the South Americans into the lead for the first time in the game in the 48th minute.

Mercado DEFLECTS Messi's shot into the net!#ARG takes the lead early in the second half off of a deflection.#WorldCup pic.twitter.com/h5vj7Bulpn

Barely 10 minutes later everything was tied up once again thanks to Benjamin Pavard. It was a massive turning point in the match, and the first of three unanswered French goals.

OUTSIDE OF THE FOOT ON THE VOLLEY AND INTO THE NET!!

With the score tied, France blew the game wide open thanks to a pair of goals scored by 19-year-old sensation Kylian Mbappe.

Mbappe struck in the 64th minute after a brief scramble in front of Argentina’s goal.

Mbappé DOES IT AGAIN!

His second #WorldCup goal gives #FRA the lead. What an incredible game. pic.twitter.com/HdODnjNiFB

Argentina struggled to keep their composure, and Mbappe scored again in the 68th minute, making it 4-2 for France and effectively putting the game out of reach for the Argentinians.

Mbappé gets his second of the game and #FRA takes a two-goal lead.#WorldCup pic.twitter.com/o58tvEYzVJ

Sergio Aguero scored in the dying moments of the game to pull Argentina within a goal, but it was too late.

The party began in Paris:

France may have emerged as the victors, but the immediate aftermath was speculation that Messi has played for the very last time at the World Cup. There were plenty of emotions on display, as players from both teams paid respect to a legend.

No magic for Ronaldo

After watch his rival lose to France earlier in the day, it was Cristiano Ronaldo’s turn to try and lead his countrymen to glory. But Edinson Cavani had other ideas, scoring a pair of goals en route to a 2-1 Uruguay win over the Portugal.

Less than 10 minutes in, Edinson Cavani's devastating header on a perfect cross from Luis Suarez makes it 1-0 #URU#WorldCup pic.twitter.com/PRGQoVABnR

Prior to Saturday, Uruguay had not conceded a goal at the World Cup, but Portugal ended that run when Pepe levelled the match in the 55th minute.

Pepe scores the equalizer, the first goal Uruguay has conceded at the #WorldCup pic.twitter.com/edqhI11DCS

It was a tight match, and Cavani struck again in the 61st minute, putting Uruguay back on top.

CAVANI DOES IT AGAIN!!#URU takes the lead again thanks to another fantastic finish from Edinson Cavani.#WorldCup pic.twitter.com/E3gMhbyXOZ

This was the reaction back in Montevideo:

There was hope for a last minute penalty kick for Portugal, but the referee ruled that there was no handball by the Uruguayan defender, and there was no video review made by the VAR officials.

Ronaldo had few chances in the match.

Uruguay moves on to the quarter-finals for the first time since 2010, where they will face France.

The Round of 16 continues with a pair of matches on Sunday. Spain play hosts Russia in the early game, with Croatia taking on Denmark in the late match.