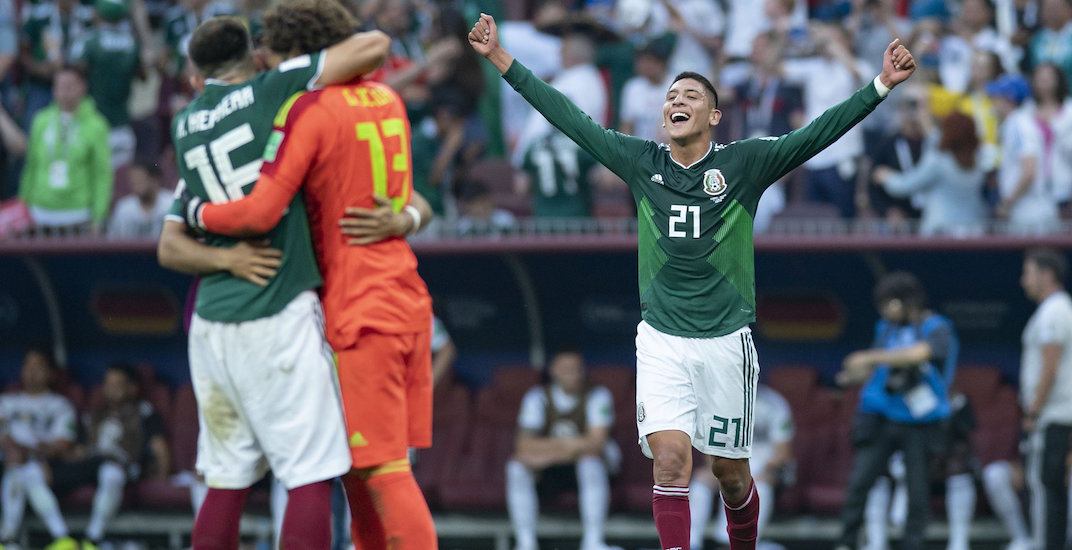 Big events like the World Cup are made for upsets, and we’ve seen just that so far at the 2018 edition.

Since the tournament officially kicked off on Thursday, we’ve seen almost all of the contenders draw or lose their opening matches.

This has to be considered the biggest upset of Russia 2018 so far.

Before the match Mexico fans were hardly confident that they could pull out a result against the Germans, but the result was more than they dared to hope for.

Ay, mamá. May the odds be ever in our favour. #GERMEX #worldcup

This time, however, the odds were in Mexico’s favour with Toni Kroos and Julian Brandt hitting the woodwork for Germany, and Hirving Lozano scoring the only goal of the game in the 35th minute.

While Mexico certainly isn’t a pushover by any means, powerhouse Germany are the reigning champs, and have won the World Cup four times in total.

So beating them was a big deal.

This is the moment that caused an earthquake in Mexico City immediately after Hirving Lozano's goal. 🇲🇽

You could say it was earth-moving back home in Mexico. Literally.

A small artificial earthquake detected in Mexico City “possibly due to mass jumping” when Mexico scored against Germany https://t.co/9arKFZHORU

Mexico has reached the quarterfinals twice before, when they hosted in 1970 and 1986.

Based on the win against Germany, Mexico will mostly likely progress to the next round of play provided they win their match against South Korea next Saturday.

Speaking of Brazil, Sunday was their first World Cup final match since they were embarrassed by Germany in the 2014 semifinals.

Brazil, of course, is always considered a favourite to win the World Cup, but they’ve had to take a different approach since that 7-1 thrashing in Belo Horizonte nearly four years ago.

While Brazil looked better today than they did in that infamous match in 2014, it was the first time in 40 years that they didn’t win their World Cup opener.

Switzerland holds Brazil 1-1. This is first time in 40 years when Brazil failed to start its FIFA World Cup campaign with a victory. Last time they failed to win its opening match was in 1978 when they drew 1-1 with Sweden.
#Football #FIFA #WorldCup #Brazil #BRA #BRASUI #SUI

Switzerland is considered to be a dark horse, more likely to cause some damage to the title aspirations of others rather than winning it for themselves.

On Sunday Switzerland made things difficult for Brazil, playing with a compact defence and Steven Zuber tying the game in the 50th minute.

#SUI LEVEL IT UP!

Steven Zuber heads the ball home to tie the game at 1-1 early in the 2nd half #WorldCup pic.twitter.com/SJAbaWAPmA

Still, that first half strike from Brazil’s Philippe Coutinho was something special…

Group E is looking very interesting with Serbia currently at the top of the table.

So, this is how Group E is looking after today's fixtures…

This match featured a Vancouver connection, with Whitecaps captain Kendall Waston and his former MLS teammate Christian Bolaños both in the squad for Costa Rica’s opener against Serbia.

Waston was an unused substitute while Bolaños replaced Johan Venegas only for the final 30 minutes of the game.

Do not mess with our Kendall Waston. #VamosTicos #WorldCup #VWFC

Los Ticos could have taken control of this match early, but Giancarlo Gonzalez, who was completely unmarked in front of goal, put his header well over the Serbian goal.

It was one of several misses that Costa Rica would later come to regret, with Serbia scoring the only goal of the match.

Aleksandar Kolarov, who was also named Man of the Match, scored a highlight reel free kick in the second half.

Kolarov scores on a BRILLIANTLY hit free-kick to give #SRB a 1-0 lead over #CRC! #WorldCup pic.twitter.com/Bu0iHU1AtD

Kolarov’s goal drew admiration from fans and media, with many comparing it to Cristiano Ronaldo’s strike against Spain on Friday.

Ronaldo: I just scored the best free-kick at this World Cup.

The task doesn’t get any easier for Waston and his Costa Rica teammates, who are faced with a difficult game against Brazil on June 22nd.

There is a silver lining to Monday morning this week, and that means that there will be a handful of matches from Groups F and G tomorrow morning.

Sweden, Belgium and England all play their first matches of the tournament.