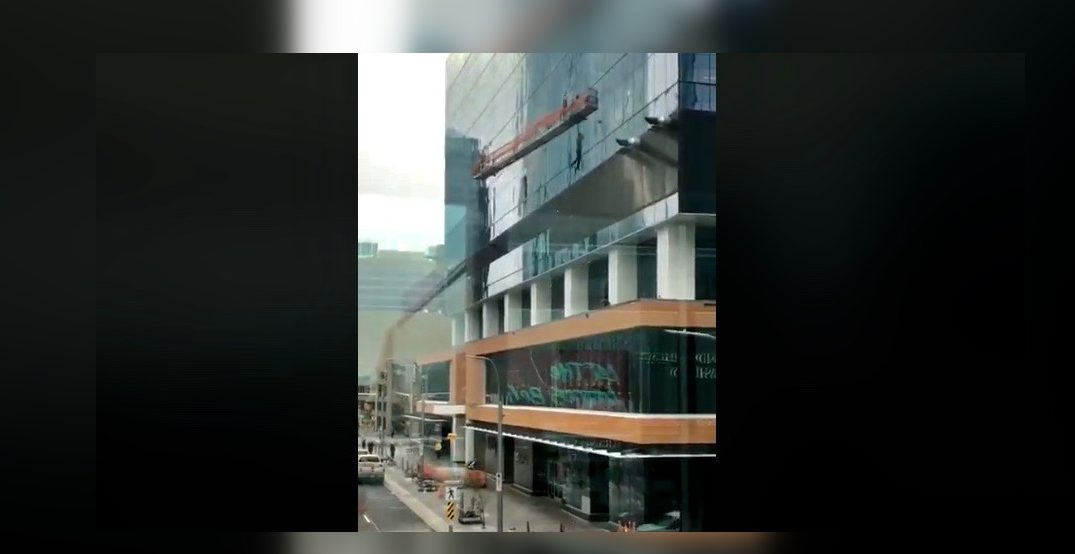 Disaster was averted in Edmonton today thanks to a couple of properly secured harnesses.

Two workers were operating a swing stage on the east side of Stantec Tower when strong gusts of winds lifted the scaffolding off of the side of the building.

The winds were so strong that Environment Canada had issued wind warnings for much of the province earlier today, with gusts of over 100 km/h warned to be a possibility for Edmonton and up to 130 km/h further south in Calgary.

The winds caused the scaffolding to crash against the building a number of times, with the workers going along for the ride.

The battering continued long enough for a number of onlookers to begin recording video, capturing the moment that one of the workers fell off — thankfully being caught by a security harness and left dangling dozens of feet above the street.

Edmonton Fire and Rescue Services managed to rescue the worker via a ladder and a technical rescue team, and a representative from Edmonton Fire told Daily Hive in a phone interview that no injuries were reported for the workers or anyone in the building.

The second worker remained on the platform to assist Edmonton Fire and Rescue in securing the scaffolding and lowering it to the ground.

At Stantec Tower. Fire still here, they’re going to help out to clear the glass before the wind really picks up. Guys who were up there were doing maintenance work. #yeg pic.twitter.com/dwy5iOcA1U

Thank you @EdmontonFire for being the quiet heroes who keep us safe. Your skill and composure were on full display rescuing a window washing crew this afternoon. #stantectower #yeg #yegdt pic.twitter.com/PNGHNub60Z