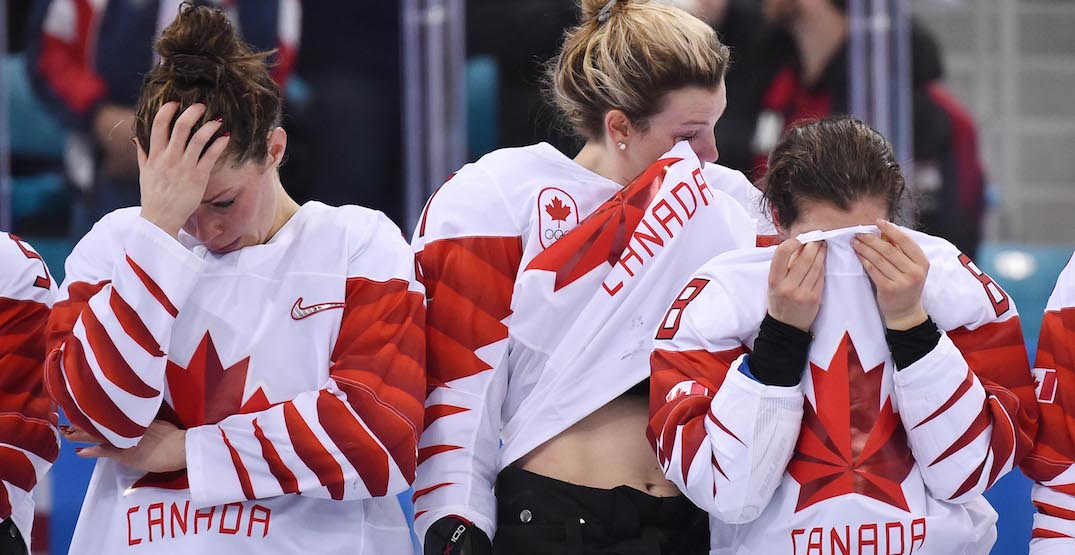 The COVID-19 pandemic has not been kind to the professional sports world, and women’s sports in particular has often bore the brunt of budget cuts and cancellations.

The IIHF Women’s World Hockey Championship in Nova Scotia was cancelled just days before the players were set to arrive in the province last week. The IIHF announced earlier today that the tournament has been rescheduled for August 20-31 at a yet to be announced location in Canada.

It’s not perfect, but this qualifies as good news after the crushing disappointment that women’s hockey players felt last week.

“It was great to hear about the new dates for women’s worlds especially after an unfortunate situation in Halifax,” Team Canada forward Laura Stacey explained to Daily Hive. “It is definitely a shinning glimmer of hope in a difficult year.”

April 21 was the last day of selection camp for Stacey and her teammates. Players were at the rink warming up when they got called into the stands.

Stacey, who first represented Canada at the World Championships in 2017, knew it wasn’t going to be good news.

“Everybody was pretty crushed, shocked,” Stacey explained. “Nobody really expected it, it was so close to being successful, the selection camp was going so well, everything was moving in a really positive direction. It was like a big bomb dropped and then it got cancelled, we were heading home.

“Nobody really knew what to do… [we were] very overwhelmed, shocked, and lost.”

When something doesn’t go as planned, fans, players, and media are quick to criticize and find someone to blame. The IIHF and Hockey Canada took a lot of heat, but ultimately Nova Scotia Premier Ian Rankin made the call to cancel the tournament as cases of COVID-19 were rising in his province.

“It was the Premier’s decision,” Stacey said. “At the end of the day, he pulled the plug, cases were rising in Halifax, Nova Scotia, and the Maritimes in general. I think he started to panic and he didn’t know what to do… There was no negotiations, no talking and that was it. It’s very very frustrating that one person can have that much power.”

The plan was for players and staff from all participating countries quarantine before and after arriving in Nova Scotia. The Nova Scotia government didn’t want to take any chances though.

USA’s Kendall Coyne Schofield was outspoken last week about the fact that the IIHF seemingly didn’t have a backup plan for such a decision.

“I think it’s a really tricky situation,” Stacey admitted. “I do wish there was a backup plan. In the heat of the moment that’s what I wish. I wish it was so easy that it would be transferred, just happen elsewhere.”

Female athletes have long fought to not be compared to their male counterparts, but when men’s tournaments are being pushed through while their tournaments are being cancelled, it’s hard to ignore. The men’s U18 World Hockey Championships are currently being played in Texas. Meanwhile, the women’s U18 tournament was cancelled for the second year in a row. The World Juniors were played in a bubble in Edmonton. The men’s World Hockey Championship is set to begin in Latvia in May.

“Seeing the U18’s playing on TV and seeing how amazing the World Junior Championships went off, it definitely makes this a lot harder to heal,” said Stacey. “It makes it hit a little bit closer to home and harder. In the other sense, we can’t compare ourselves to the men’s tournaments and the locations they’ve been in.

“We don’t want to compare ourselves to the those men’s U18’s and championships because that does hurt. It’s not something we want to hold our heads on.”

What about the Women’s U18 that you cancelled 4 months prior to its start? You’re telling me you couldn’t find a safe alternative in those 4 months? Or did you think everyone would just forget & move on.

*Writes this as Men’s U18 is currently being played* https://t.co/Fd2wdlQMLg

The 2022 Winter Olympics are less than a year away and Stacey and her teammates have played just three games together since January, 2020. Instead, players have been practicing in small groups scattered across Canada.

Summertime is regarded as the off-season for women’s hockey. While players train and stay active year-round, having a World Championship in August will be a shock to the system ahead of a busy fall leading into the Olympics.

“We have no idea what the next steps are,” Stacey admitted earlier this week. “I think Hockey Canada, all of the federations and players are all in the same boat. We’re a little lost right now. We don’t know what to do. Whether it’s the start of the off-season or should we still be training.”

Whether it be in Edmonton, Calgary, or elsewhere, Stacey and her teammates just want to play hockey.