Women of Vancouver (WofV) is a monthly editorial featuring the most stylish and professional women in Vancouver. Style by Sarai recently interviewed Bethany Brown for this exclusive in-depth photo editorial.

What do you do for work?
I am an Actor, a Singer, and a Musician. Currently I have two animated series on the go, voicing four characters on Lego Legends of Chima. I also voice a lead character on an upcoming series on PBS that will be released later this year. My most recent work in film, ‘The Company You Keep’ can be seen on the big screen. I worked alongside Robert Redford and Shia LaBeouf – what an EPIC experience. I have released tracks worldwide and have worked with some incredibly talented people. I am thrilled to have been picked up by a new label and we are readying ourselves for the major radio BEAT DROP. I have been a professional musician since the age of 9 and play violin, viola, cello, keys, guitar, bass and have goofed around with a mean mouth harp and sexy sax. I also write and sing jingles and score for film and TV. If you watch the tube you’ll probably hear one of my jingles linked with Philly Cream Cheese called ‘Spread a Little Love’.

What do you think of the music scene in Vancouver? Where do you recommend people to go for music?
Vancouver has funky little pockets to catch good music. You can never go wrong with Jazz at the Libra Room on Commercial Drive or hit Guilt and Co. in Gastown for fun live music, some board games, and pretty rad people. I think The Railway Club and The Media Club support local Vancouver artists the most. I would love to see more support for our local musicians as we have some KILLER talented people here.

So where do you work?
I am based in Vancouver but also work internationally both in real life and virtually. I collaborate with various producers from around the globe – Tokyo, Bali, Spain, France, Italy, London, and Morocco. While I am working overseas I love tacking on layovers, even if it’s like a 10 hour shopping spree in Korea, or adding extra days on the front end or back end so I can sneak a peak at the culture of wherever I am. I try to link up with locals and get them to give me their version of the city.

What does a typical work week look like for you?
Well, I would say that there is no sense of typical to any week in my life, but I’ll give a general overview…

To start the week I drive to set for a 6am call time. Eat on the way there and finish during hair and makeup. Pop into my trailer to get into wardrobe and take one last look at my script for the scene/day. Shoot 3 scenes and wrap 13 hours later. On my breaks I prep scripts for the next day.

Next day, I split my time in studio recording for two different shows. Following that is a day ‘off’ where I end up working on other projects.

I am completing my Master’s degree at UBC in Occupational Therapy, so the next day is devote to prepping for a presentation. When my work schedule overlaps my personal life, my booking agents always get me where I need to be, including Vegas for a friend’s birthday party. 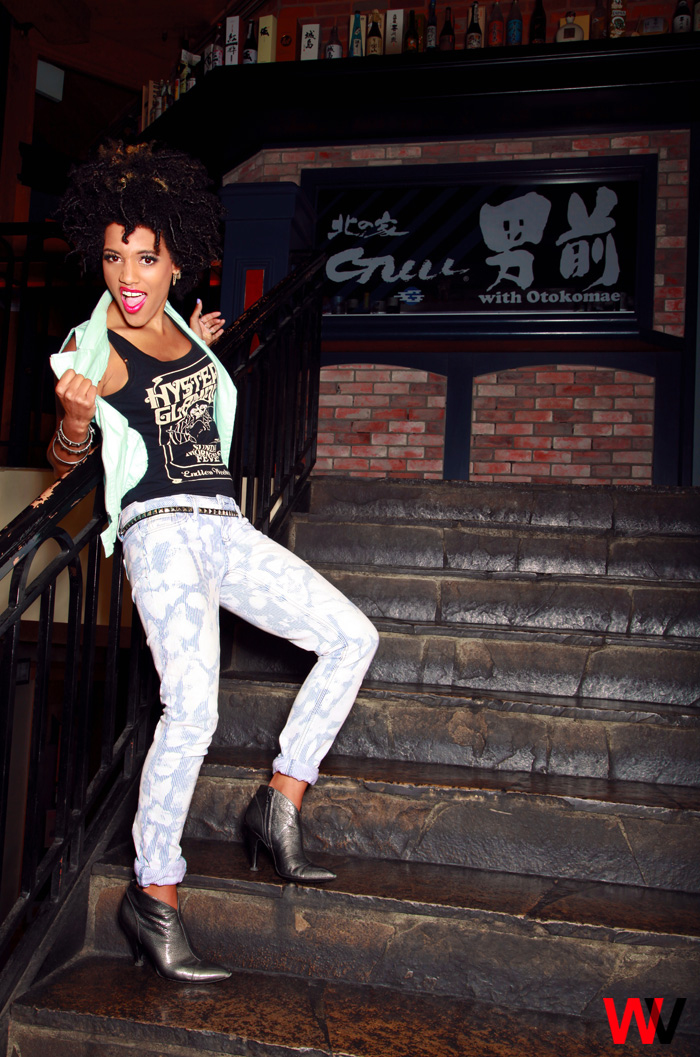 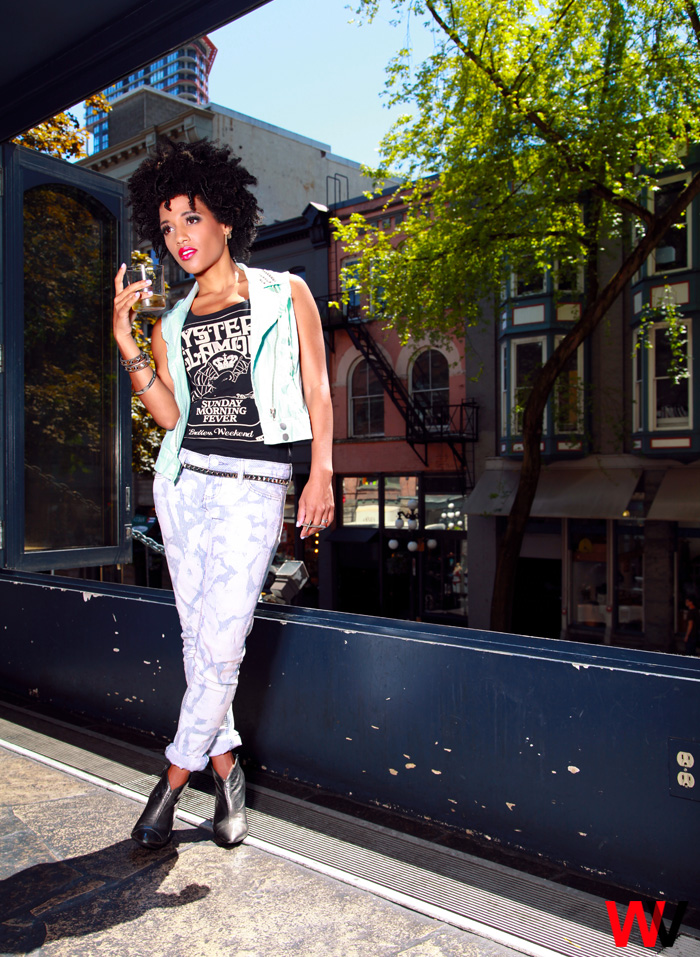 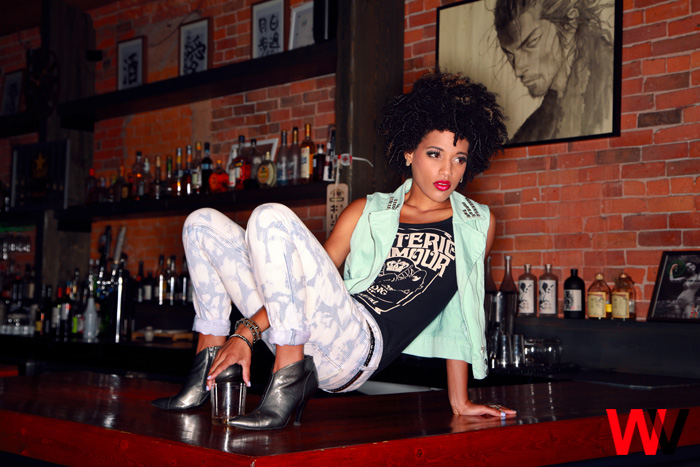 What do you like about GUU in Gastown?
I just love stepping back into the authenticity of Japan here in VanCity. I also dig trying out my slowly disappearing Japanese skills with the servers. There have only been a few incidences of ‘language devastation’ where I have said something ludicrous – but I expect there to be more.

What do you recommend everyone to try at Guu?
The Maguro Tataki (seared tuna), the Kimchi Udon (Japanese fat noodles with Korean Kimchi), and the UME SHU (Japanese Plum Wine)… has to be one of the smoothest drinks on the planet. When I lived in Tokyo, Ume Shu inspired a track called ‘Sexy Pie’… we  recorded it in Bali and it got linked up with a commercial called ‘Ice Creamy Goodness’. If only you could see the images I’m seeing of elderly women devouring vanilla ice cream in an OH SO risque manner – all I’m trying to say is that this bevy inspires unbridled good times.

How long did you live in Tokyo and what brought you there?
I lived there for about a year. I played varsity soccer for Simon Fraser University during my undergrad and my partner in crime on the front line was from Japan. She was such a ninja and I knew that this budding afro samurai needed to globalize so I headed out on an Asian/Indonesian adventure. I don’t think I slept when I lived there, by day I taught English and at night toured around with my band. I travelled every weekend taking night buses out after my Friday shifts and then flying back in just in time for classes on Monday. 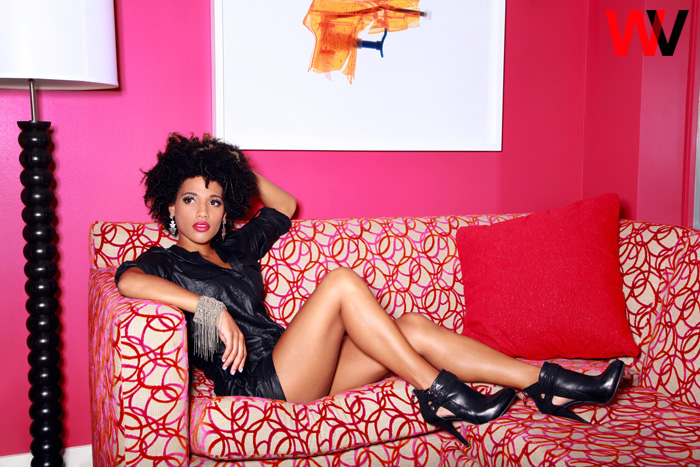 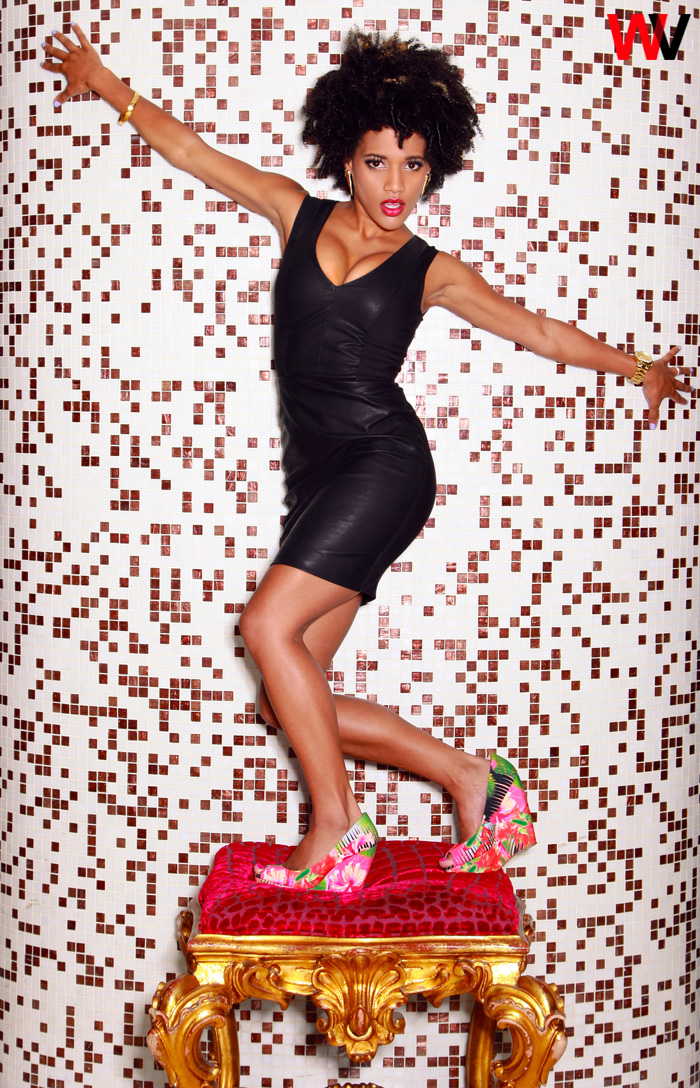 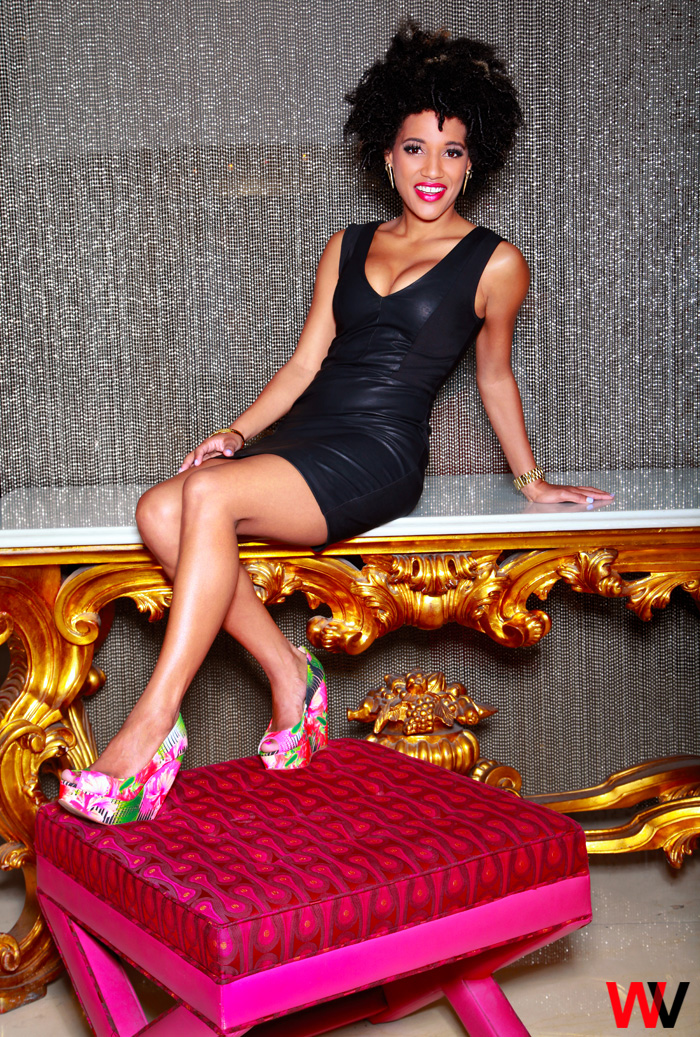 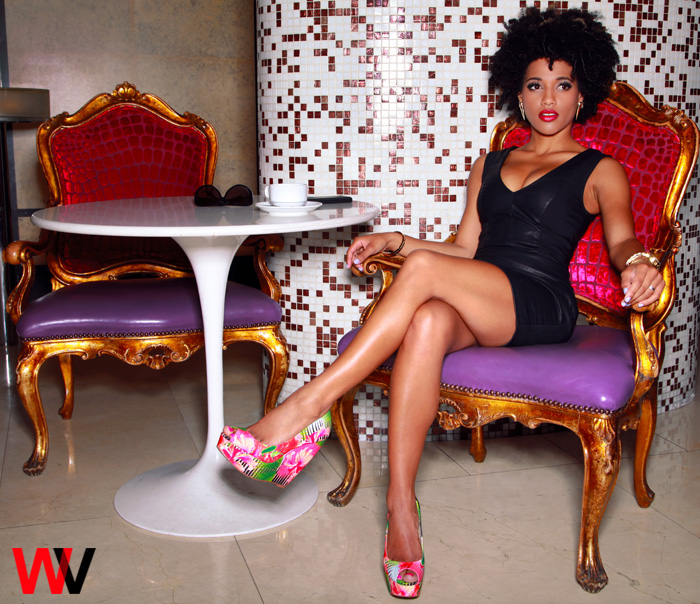 What’s your connection to the Opus?
It’s funny, when you open yourself up to life the most interesting people seem to enter. I met the owner while writing in the Café there. We made fast friends ‘cause we share a similar vibe. They actually ended up using me as the personality for one of their Lifestyle Concierges, ‘Dede’. I also love how their lounge/restaurant continually stays fresh – always growing and morphing. It’s kinda how I want to be, open to new experiences, while embracing all that this wonderful life has to offer. I feel truly blessed and very grateful. 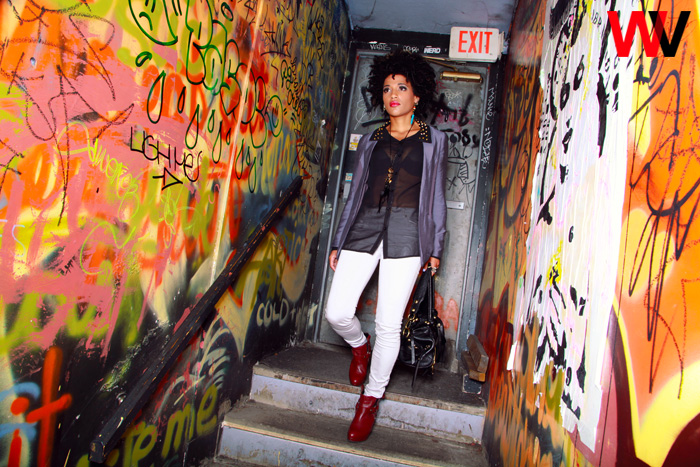 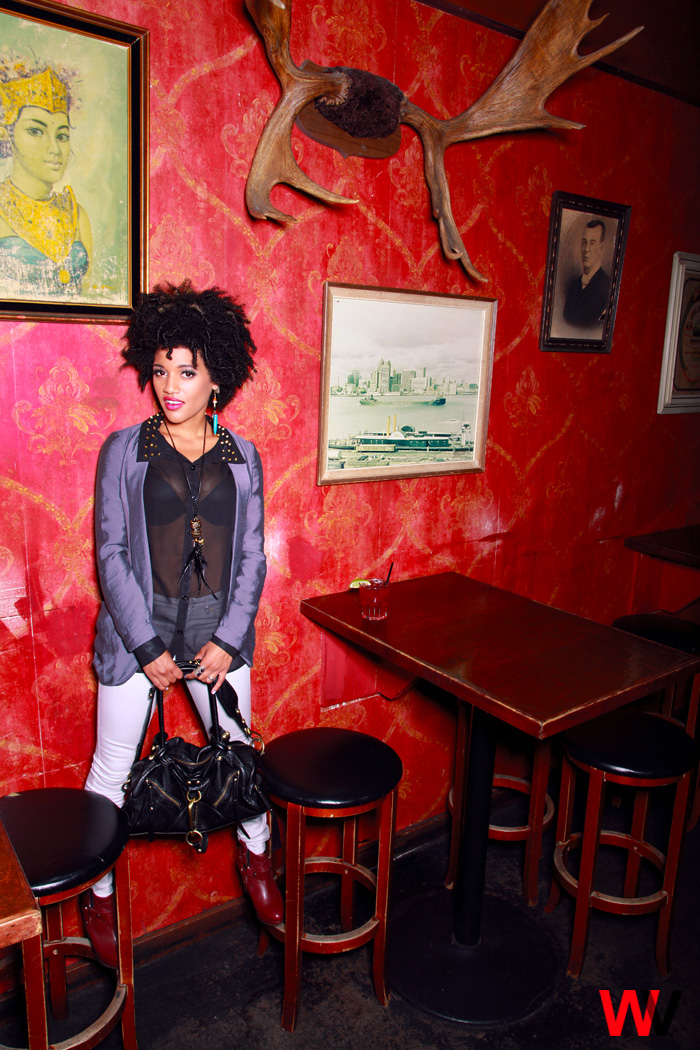 Where do you like to go when you’re not heading into downtown?
Commercial Drive or Main Street. There are some super awesome spots in both hoods and they have the most eclectic options for food. I love Harambe for Ethiopian food, on Commercial; Sal Y Limon for Mexican food on Fraser and Kingsway; Nuba for Mediterranean food on Main and 3rd – oh and right across the street is a ‘secret spot’ called the Narrow with some of the BEST caesars around. They add a dollop of Horseradish to really give it a kick.

How did you find out about The Narrow Lounge?
Keepin’ an ear to the street and a finger on the pulse. (laughs), someone randomly told me about it when we were discussing delicious Caesars in the city.

How would you describe your style?
‘Sophista-funk’: A Funky twist on Urban Chic splashed with international flare. I love to pick up pieces from my travels and pair them with strong staple elements. Like ‘drop-crotch’ jems from Archetype on Main paired with a Retro Hysteric Galmour tank from Tokyo, -Wait, scratch that! Distressed and detailed Cooks and Chelica jeans from Tokyo paired with Brown Italian Leather sling back sandals from Holt, a banging tank from Kosan Road in Bangkok, and vintage leather jacket. It’s imperative to layer in fun accessories, that includes a sassy nail colour.

What message do you want to convey through the Women of Vancouver editorial?
Vancouver can pulse the passion better than any city in the world. It is gorgeous, eclectic, and has pockets of authenticity that absolutely resonate. I want to encourage people to find their inner ‘style’ and let it be unencumbered by insecurity so that VanCity shines even harder.

THANKS BETHANY BROWN, FOR BEING A STYLISH WOMAN IN VANCOUVER!

Women of Vancouver is a monthly editorial featuring the most stylish and professional women in Vancouver. WofV is currently being released exclusively on Vancity Buzz.