Author’s Note: The following was written by Melissa as a follow-up to a January 2015 blog post entitled “The Female Advocate Dilemma”, in an attempt to shine a light on the dedicated and talented women shaping Metro Vancouver for the better.

Just over a year ago, I reflected on my experiences of delving into the issues affecting our cities, and attending various related events. I felt then, and still do now, that it was great to be able to speak with like-minded people who understood where I was coming from, and had genuine interest in what I was speaking about. But there was always one glaring reality: more often than not, I was the only woman in the room. 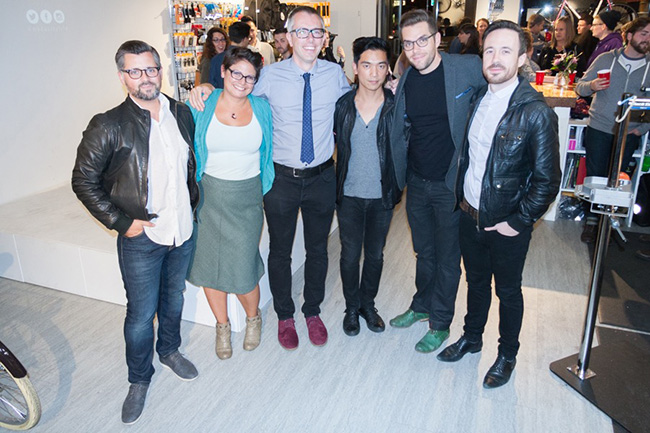 This unfortunate reality inspired a post for the Modacity blog, which addressed my feelings as being one of the only ladies present for these conversations. I wondered why it was that so few women came out to the events I was attending, and what could be done to encourage them to attend.

I still wonder whether creating a “women only” meet-up group would generate more interest in gathering. Not as a means of excluding the great men in the region with passion and desire to work in transportation, land use, and housing; but rather to offer a welcome space free of any pressure or judgment, where like-minded ladies could share ideas more openly. 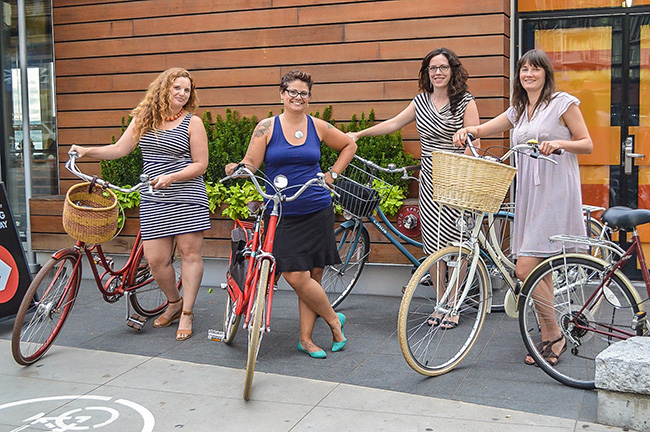 The post itself generated mixed responses, but resonated with a lot of women out there who felt similarly isolated. It was pointed out to me, and I agree, that when it comes to the bike-related organizations in the city, women are making up a large number of the advocates, but I think – in other areas – we still have a ways to go.

Part of the solution lies in recognizing the women throughout the region who are working and advocating for the urban environment. In my own experience, I have heard the phrase “There just aren’t many women doing this work” one too many times, and I want that statement to become redundant. There are countless women toiling daily to move important conversations and issues forward, and address our changing cities, and they deserve far more recognition than they are receiving. 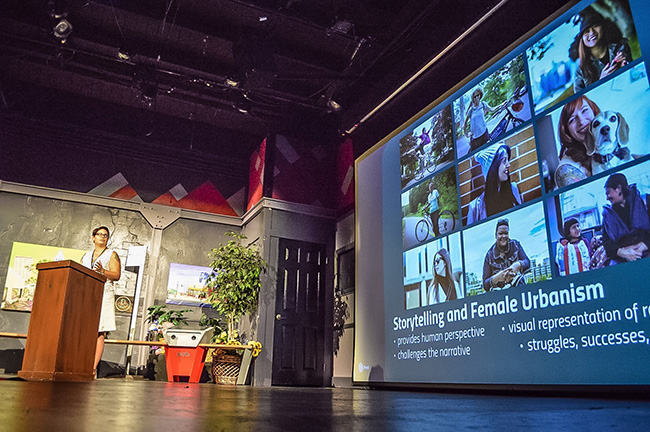 With that in mind, I have set out to start telling the stories of the ladies working openly or behind the scenes to build better cities. The monthly Women in Urbanism series will feature females from various backgrounds; discussing their successes, examining the challenges, and explore what drives the passion for the work they do.

My hope is that this series will not only highlight some of the amazing women working in this region, but also help reassure others that they are not alone. If just one of these stories helps inspire a young woman in the field, or acts as the foundation of a new mentorship, I will consider it a success. History is built on the act of storytelling, and it is my hope that this series will be just the beginning of passing on female narratives from yesterday and today, in order to inspire the stories of tomorrow. 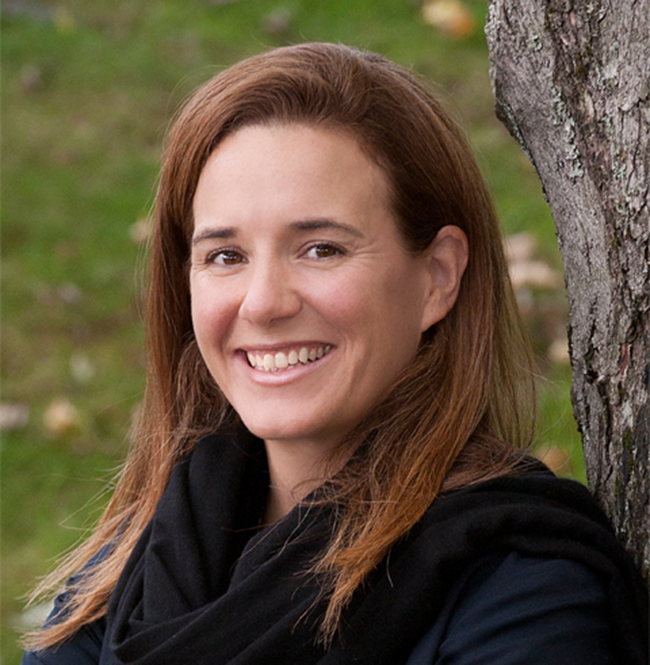 For my first instalment of this series, I was very excited to sit down with the co-founder of the City of Vancouver’s famed CityStudio – Janet Moore. CityStudio bridges the gap between professionals, students, the community, and the City to collaborate on a number of projects focused on improving the urban experience, enriching neighbourhoods, and making the city more livable, joyful and sustainable.

Moore has spent her adult life focused on having a positive impact on the natural environment, but her journey has definitely not been a direct trajectory. Her academic career began in the field of Marine Biology, with a focus on marine mammal stranding. But as she progressed through her undergraduate and postgraduate, though, she realized her true passion lay in the world of education.

With her own mother – who was a teacher herself – providing the personal inspiration, Moore began teaching at the University of British Columbia while in graduate school. During this period, she started to question the standard teaching model, and wanted to look at ways of changing how students are taught.

At this point, Moore met William Rees, then Director of the School of Community and Regional Planning (SCARP), who helped her work towards her doctoral dissertation, “Recreating the University from within: Sustainability and transformation in higher education”. Since achieving her PhD in Curriculum Studies, Moore has focused her efforts on bringing sustainability and education together at the university.

These efforts, and her work on developing Inter-Institutional Sustainability Courses at the Great Northern Way campus, are what connected her with Duane Elverum, her co-founder at CityStudio, which launched in 2011. Together – along with a collection of full- and part-time staff – they are realizing their collective vision of evolving the traditional classroom into one where students have the opportunity to explore the current challenges their city faces, and collaborate directly with individuals who can make their work a reality.

Along with her work at CityStudio, Moore has spent the last ten years with Simon Fraser University’s Semester in Dialogue as an Associate Professor, becoming its Director in April 2014. There, she focuses her teaching more on direct action as well as dialogue, or what she describes as a “participatory classroom”.

Moore’s work over the course of two decades has been quite the journey, but it has not been without its challenges. One such challenge she has found in contesting the antiquated idea that we can only be one version of ourselves in any given situation.

Specifically, Moore asks herself the provocative question: “How do I show up to work and be all of myself?” In her experience, there is an expectation that we compartmentalize ourselves depending on the specific activity we are undertaking. For example, at Simon Fraser University, she is expected to be the educator; at CityStudio, the co-founder; at home, the mother. The question is why does it have to be that way? Moore recognizes how she can play an important role in changing that conversation and creating a new cultural paradigm, addressing this issue by being her complete self wherever she happens to be. Being a woman and a mother informs her decisions as a teacher and an administrator, because – as has always been her goal – these experiences merge real-life dilemmas with education and action.

It is not uncommon for her two children, and the family dog, to be at the CityStudio space from time-to-time. Moore proudly owns the decisions that put her on her current path, and feels it is important to think about where we, as a society, prioritize our time. The challenge lies in starting that difficult discussion without causing undue criticism.

Moore wonders, “How do we have that conversation about the integration of a fulfilling life, with adequate time for work, family and play, in a manner that is safe?”

From a female perspective, often the discussions around starting a family result in being viewed as having less commitment to your profession. Moore acknowledges that had she not made the decision to have children, and continue to place great import on being available to them, she could be in a different place in her career. But making these particular choices shouldn’t mean sacrificing our aspirations.

While aware of her own role as a mentor, Moore often ponders where the other female role models can be found. “In the past, it was the women at home that played the role of community activists,” she reflects. Now, because of their efforts, women have come so far and enjoy more rights then our predecessors. But as a result, we are now stretched thinly between work and life. Moore sees tremendous value in placing an emphasis on seeking balance, and empowering women to advocate for each other, our families, and our cities, without having to surrender something in return.

Moore is certainly doing well to strike that fine balance, stating that her work with CityStudio and Simon Fraser University is the most interesting and exciting she’s ever done. “We’ve hit a stride of what education should feel like, and connecting people to their purpose.” Certainly, Moore is providing inspiration to a whole new generation of female urbanists, while making our cities more sustainable places to live. In her own words, “I am still saving the whales, but in a different way.”