Promoting gender equality has the potential to add $150 billion to Canada’s GDP by 2026.

In a new report from the McKinsey Global Institute (MGI), The power of parity: Advancing women’s equality in Canada, research forecasts a 0.6% increase to annual GDP growth with gender equality, which is equivalent to adding a new financial sector to the local economy.

Advancing women in the economy would also show each province gaining between 0.4 and 0.9% in growth each year, with the most highest growth in British Columbia, Ontario, Prince Edward Island, and Quebec.

While Canada is among the global leaders in women’s equality, MGI reports that progress has stalled over the past 20 years. In fact, research on several indicators has shown little improvement and, at current rates, gender gaps could take 30 to 180 years to close, according to MGI. 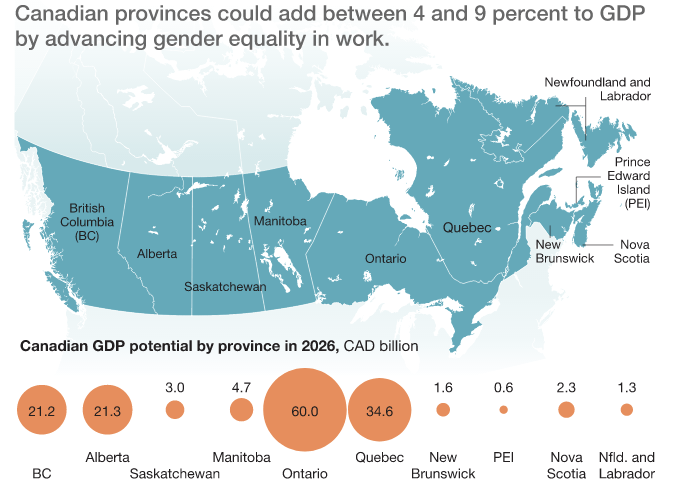 Gender gaps are especially significant when it comes to corporate Canada, where women are less likely to be promoted at every stage of their careers. MGI indicates that women represent 35% of managerial positions, and states that promotion from director to vice president is a “particular bottleneck, where men are three times more likely to advance than women.”

“The loss of female talent along the pipeline is not due to lack of ambition or higher attrition—women aspire to promotions at a similar rate and actually leave at a lower rate than their male counterparts,” reads the report. “To create opportunities for women to advance in their careers and ascend to leadership ranks, it is important for companies to support women’s ambitions and for women to commit to the sectors and roles that create paths to leadership.” 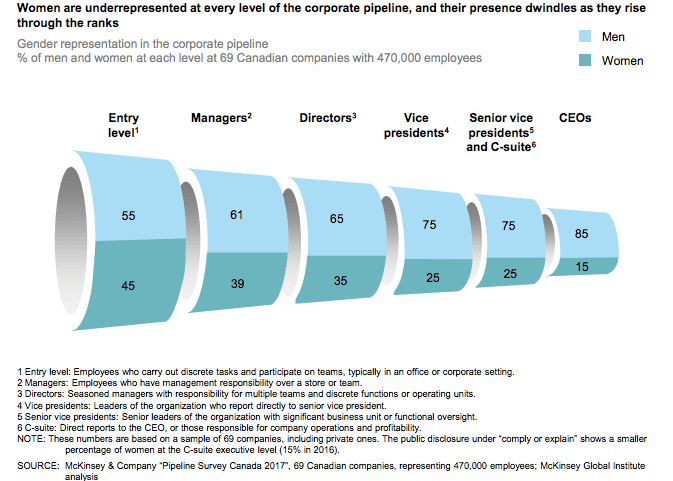 MGI recommends Canadian companies embrace an inclusive and holistic set of initiatives and implementing them, stating that best-in-class companies use these to drive progress. The initiatives include:

“Gender equality in work is linked with gender equality in society—the former is not possible without the latter,” states the report. “… Engaging men as well as women and collaborating across organizations and sectors to tackle entrenched attitudes will be one of the most difficult but critical keys to success, ensuring Canada’s continued position as a global leader on women’s equality.”