The Port Mann Bridge has been officially open for merely a month and has already been the site of two major and separate accidents that have been caused by winter weather and, in part, bridge design. As taxpayers and toll-paying bridge users, severe criticism is absolutely warranted to ensure that such potentially fatal accidents do not happen again. However, it is equally important to acknowledge that such issues with the Port Mann Bridge can and will be fixed. There is also a long history of major projects that, once finished, they struggle with short initial issues and problems. More importantly, these problems were always quickly addressed and resolved.

Before parallels are quickly drawn between the new Port Mann Bridge and the infamous NDP-era built ‘PacifiCat’ fast ferries, it is important to acknowledge that the numerous highly problematic issues with the fast ferries were virtually impossible to fix: their costly high fuel consumption; the intake of debris, such as large logs, that were often sucked into the engines; the creation of large wakes (waves) when operated at full speed (it damaged coastline structures); poorly designed, uncomfortable and highly cramped interiors in addition to little outdoor deck space; and balancing issues which caused longer loading times, negating the whole aspect of a faster ferry service. These problems remained with the three-vessel fast ferry fleet not only throughout the entire duration of their short operational lifespan but also when they were put out of service for “repairs.” When any fix was deemed impossible without further significant investment, the vessels were permanently decommissioned from service and, of course, sold.

The end of an era in BC: a photo of PacifiCat Voyager in 2009 being shipped off on the heavy-lift vessel, the Swift, to its new owners in Abu Dhabi, UAE. All three vessels are now located in the Middle East. Photo credit: PBase 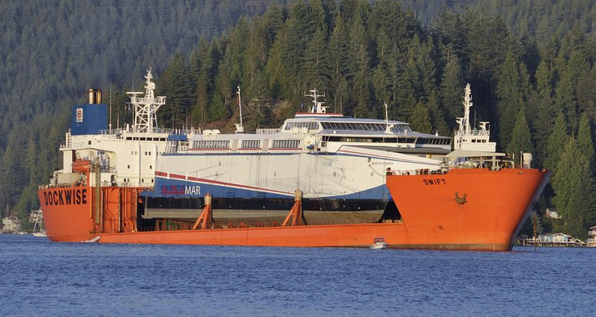 On the other hand, in striking contrast, the new Port Mann Bridge has been open for barely a month. A long-term conclusion on the vitality of this piece of critical transportation infrastructure cannot be determined within such a short timespan. Its issues, at least so far, have been largely caused by winter weather. And to some extent, design is also to blame, but solely with regards to the lone December 19, 2012 incident of “ice bombs” falling from the overhead suspension cables onto vehicles below.

More time, perhaps a full year, is needed to fully judge the engineered design and evolving maintenance procedures of the Port Mann Bridge. This is a brand new bridge, just completed and barely fully open for a month: its maintenance staff (and contractors) have only just begun to learn of any potential issues the bridge may have, how the bridge functions, and the best methods to operate it in various weather conditions.

To reiterate this article’s introduction, there is a long history of new infrastructure, once completed, struggling with short initial problems. When the Canada Line opened in 2009, it had some initial problems with its computerized automation program. In particular, during the Canada Line’s first snowfall on November 26, 2010, the entire system completely failed with severe service delays (in contrast, the BC Rapid Transit Corporation-operated Expo and Millennium Lines – largely elevated and exposed to the outdoors – did not suffer any major disruptions from that particular snowfall, which saw heavier accumulation in the eastern suburbs where the two lines are located).

As it turns out, the Canada Line’s operators (ProTransBC) did not run overnight “ghost trains” to clear snow off from the elevated/exposed sections of the SkyTrain track south of Vancouver’s Marine Drive as well as in Richmond and Sea Island. This led to severe snow accumulation and ice build-up on the elevated tracks.

During the morning rush hour of that snowfall day, two Canada Line trains stalled along the elevated section of the Canada Line, including the incident of one train stalling mid-length on the system’s North Arm Bridge over the Fraser River. The train wheels did not receive sufficient traction on the tracks due to ice and snow build up. Later on, the problem trains even lost power when they derailed from the “third rail.” The third rail runs along the side of the tracks and feeds electricity into the trains. Passengers inside the capacity-packed train at the North Arm Bridge were stranded for 3 hours.

A digital sign at Waterfront Station’s Canada Line platform informs passengers of severe delays system-wide on the morning of November 26, 2010 due to snowfall. Photo credit: News1130 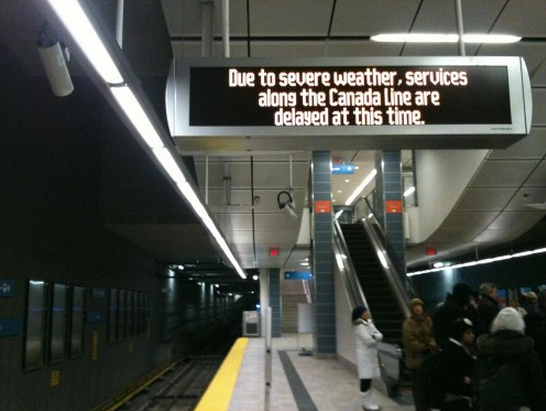 To resolve the issue of a stalled train on the North Arm Bridge, ProTransBC ran another Canada Line train to literally push the “problem train” back to the maintenance yard. Such an issue has never occurred again on the Canada Line, even though there have been other significant snowfalls since that disruptive incident. That first incident highly disrupted Canada Line service across the Fraser River, and the incident received wide media scrutiny. Similar repetitions of that severe service disrupting incident have not occurred again because ProTransBC officials have since learned how to better maintain and cope with their new train system during such winter conditions.

A photo of the stalled Canada Line train on the North Arm Bridge during the November 26, 2010 snowfall. Photo credit: MarmiteToMaple 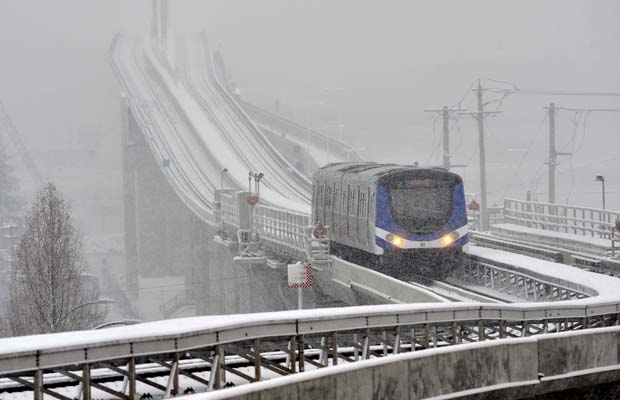 What was ProTransBC’s solution? Run more overnight “ghost trains” during overnight snowfall to clear the track of snow, in addition to improved de-icing procedures. This is also knowledge that BC Rapid Transit Company has gained after operating the Expo/Millennium Line system for nearly three decades, although its track technology is completely different from the Canada Line. In its early days, the Expo and Millennium Lines were also notorious for their issues and service disruptions during snowfall. Overtime, its operators learned the best practices and methods for operating and maintaing their system (frequent overnight “ghost trains” and de-icing procedures). The learning curve is the only natural course.

A similar incident also occurred with the trolley bus fleet two years before the Canada Line’s 2010 snow incident. Prior to the 2010 Olympics, Translink ordered a new large fleet of replacement electric trolley buses. On the morning of December 24, 2008, only 15% of Coast Mountain Bus Company’s fleet of 240 trolley bus vehicles (the fleet size at the time) were operating because of heavy ice build-up on the overhead trolley wires overnight. The manager responsible for sending out the de-icing truck overnight “misread the instructions” that were required for the new fleet of trolleys to operate during freezing temperatures. In other words, they did not de-ice the overhead electrical trolley wires overnight. The transit disruptions on that day were immense given that much of Vancouver’s bus system is dependent on the usage of electric trolleys, in addition to the incident’s poor timing on the morning of Christmas eve.

When BC Ferries ordered three new “Coastal series” ferry vessels from Germany, the new ferries ran into some problems during their initial year. It was a common occurrence to see these vessels go out of commission for repairs. However, these problems on the fleet’s newest vessels have since been largely fixed.

In one other case, shortly after the new Vancouver Convention Centre opened, a major water main inside the facility burst and flooded the ballroom while there was an event. The event was postponed for the remainder of day, but resumed later on. Similarly, water leaks from the new BC Place retractable roof have now been fixed. For these complex, large and new facilities and infrastructure, their maintenance workers were also learning of how their building/structure functioned and the best methods for keeping the structure in tip-top shape, in addition to identifying any problems and fixing such issues accordingly (as with all other examples above: SkyTrain, ferries, bridge, etc.). Did I also mention the Port Mann Bridge is the widest bridge in the world?

When new condo/office buildings or even single-dwelling homes are completed, the immediate discovery of issues and bugs with the structure are not uncommon. The construction contractor, within a certain timeframe after official construction completion, is responsible for fixing these problems at no cost to the owner. It is part of the guarantee, and such contractor guarantees are also a norm for any home renovation or repair.

As reported in the media, taxpayers are not on the hook for finding a solution that will fix the issue of ice accumulation on the overhanging suspension cables of the Port Mann Bridge. This is a responsibility and guarantee of the construction contractor as part of the project’s construction agreement. It has been two weeks since the “ice bomb” incident, and given the severity of the issue – the risk to public safety – you can be assured that contractors are busy with designing a proper solution, and that government officials are also placing immense pressure on the contractors to fulfill their duty. An incident that occurs within the span of an hour, that involves “ice bombs” being dropped onto the windshields of 40 vehicles and causes injuries, will not be taken lightly even by the most jaded public officials. This is a very serious issue that will certainly not be ignored nor go unaddressed.

With regards to the 40-car pileup on January 3, 2013 on the Port Mann Bridge, its cause was not from bridge design but from (the lack of proper) overnight maintenance. Foggy/humid conditions at near freezing temperatures led to the build up of black ice on the road surface. The incident had nothing to do with bridge design, although ice builds up more easily on new and smoothly paved road surfaces. Surely, we cannot be blaming the government for building us a smooth paved road to drive on? Nor is the Port Mann Bridge’s engineered design a unique one, its bridge design typology has been applied to many other bridges around the world. However, the Port Mann’s icy road conditions during that foggy morning could have easily been avoided had bridge operators done proper de-icing/salting procedures overnight. And perhaps, drivers could have also slowed down considerably that morning given the dense foggy road conditions. 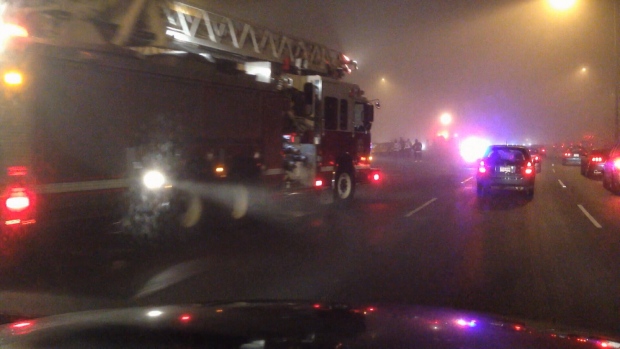 For the operators of the new Port Mann Bridge, the last few weeks have certainly been a quick (but highly unpleasant) learning curve on how to properly maintain and operate their bridge, especially in winter conditions.

There is no doubt that the designs and procedures that led to the incidents on the Port Mann Bridge need to be addressed and fixed, and they most likely will be. Public criticism is certainly warranted and has been severe in the media given the immense threat to public safety, but we should probably stop short of calling the new Port Mann Bridge a substandard lemon, akin to the infamous fast ferries.

Let’s give the new Port Mann Bridge, its construction contractors, and bridge operators more time before we give our full verdict on British Columbia’s most significant infrastructural investment in decades. In a year from now, let’s evaluate the performance of the bridge, its regular maintenance, and the changes made in response to these recent incidents. Until then, as the saying goes, keep calm and carry on.