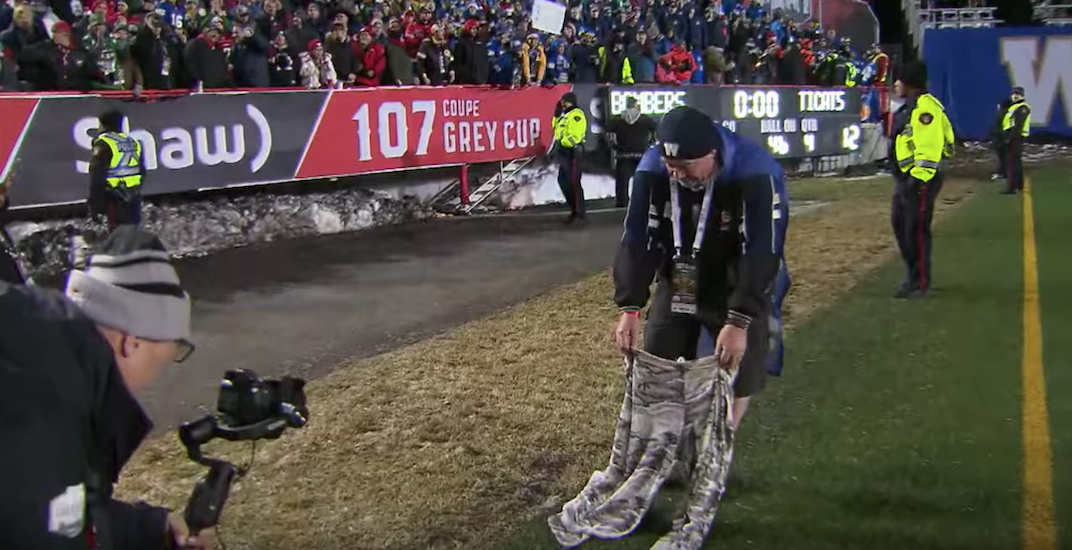 A pair of droughts ended at the 107th Grey Cup in Calgary.

With a 33-12 victory over the Hamilton Tiger-Cats, the Winnipeg Blue Bombers won their first championship since 1990 — a remarkable streak in a nine-team league.

But it was another streak that captured the imagination of a country leading up to Grey Cup Sunday.

A Winnipeg man by the name of Chris Matthew decided 18 years ago that he wouldn’t put on pants until the Blue Bombers won the Grey Cup again. Nicknamed “Shorts Guy “by many, the story blew up on social media, in part because of the hilarious comments from his wife Darla Robinson, who said they couldn’t go to nice restaurants because of her husband’s refusal to wear pants.

“We have been walking down the street when it’s been very cold and I have a fur coat, and he’s in shorts and people stare, and I just assure them ‘yes, he’s an idiot,'” Darla told the CBC.

He pledged not to wear long pants until the Winnipeg Blue Bombers won the Grey Cup — 18 years ago. https://t.co/aGOTDIW13K #TheMoment pic.twitter.com/wDSMk0hsh5

Well, Darla, the wait is over.

Chris threw on a pair of pants on the sidelines at McMahon Stadium in Calgary following the Blue Bombers’ Grey Cup triumph:

Darla wasn’t exactly thrilled with her husband’s choice of pants, and who can blame her, telling the CBC’s Devin Heroux: “I actually know fashion, those are horrible… I’d just as soon have him go back to the shorts.”

This is Chris Matthew, the guy who always wore shorts. The #Bombers are champs, so Chris can wear pants. pic.twitter.com/aWcAPlYQjV