This week, AC/DC announced the dates of their North American tour, which sees them play in Vancouver at BC Place this September.

The North American Tour date announcement came days after the group delivered an explosive performance of their current single “Rock or Bust” and their classic “Highway To Hell,” which kicked off the 57th annual Grammy Awards. This marked the Grammy-winning band’s first time performing on U.S. television in over 14 years. AC/DC are also confirmed to headline the Coachella Valley Music and Arts Festival on April 10 and 17. 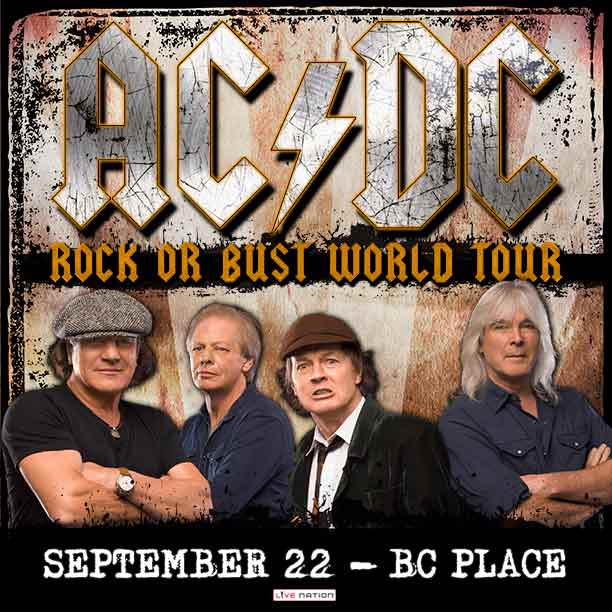 AC/DC’s latest album ‘Rock or Bust’ was released on December 2 and immediately topped sales charts around the globe. The album’s first two singles “Play Ball” and “Rock or Bust” were added to rock radio and featured in ad campaigns for major brands like Major League Baseball and Beats headphones.

Secure your seat – tickets went on sale this morning through www.livenation.com.

To enter to win a pair of tickets to see AC/DC in Vancouver at BC Place on Tuesday, September 22, do at least one of the following:

2. Leave a comment below telling us your favourite AC/DC song. (1 entry)

Contest ends February 23 at 11:59 p.m. One winner will be chosen at random and contacted through the platform they enter by.