On March 15th, the St. Regis Hotel Vancouver will celebrate its 99th birthday and kick off its centennial year. In a city that’s barely more than 125 years old, the St. Regis Hotel has been around to see most of the changes that the city has gone through. To celebrate they’ve teamed up with us to give you the ultimate hockey night out experience!

While the St. Regis Bar & Grill is one of downtown Vancouver’s favourite spots to watch the game today, the St. Regis has a long history being involved in Vancouver Hockey including a memorable couple of years during WWII when the hotel owner stepped in to sponsor the Vancouver PCHL team which played as the Vancouver St. Regis in 1943-44. Hall of Famer Cyclone Taylor was even talked out of retirement to coach the squad and legend has it that he laced up the skates one last time–at nearly 60 years old–as a publicity stunt for the team.

To celebrate the impending 99th birthday, the St. Regis Hotel and Vancity Buzz are teaming up to give away a deluxe Canucks night out which includes a night in a luxurious suite at the St. Regis Hotel along with two tickets to watch the Canucks take on the Buffalo Sabres on Saturday, March 3rd. The lucky contest winner will also enjoy dinner at the St. Regis Bar & Grill before the game along with an in-room welcome gift from Mike’s Hard Lemonade who generously supplied the hockey tickets.

Here’s how to enter (you must do all 4 to qualify): 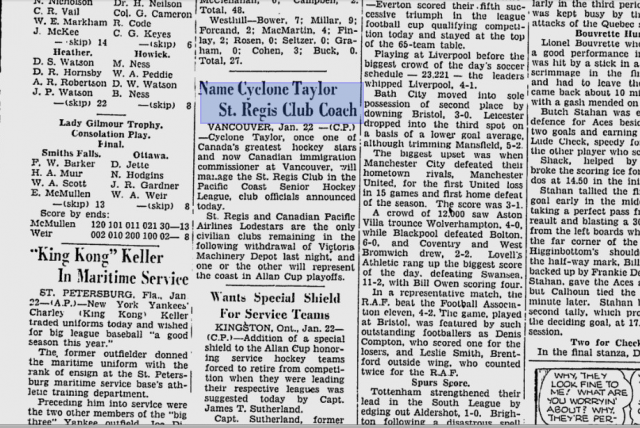