A simple Google search will reveal a slew of William Shatner interviews, and if you’re in the mood for a healthy dose of cheek and tongue, you most certainly will not be disappointed.

Vancity Buzz (or as Shatner called us, “Vanity Buzz”) scored a one-on-one with the man himself, who answered our zany questions about life, politics, and more.

Leading up to his speaking engagement at UBC’s What’s Next? event on May 28, we decided to shake things up a bit and ask Will some questions outside of the usual Star Trek sphere. The event will close out UBC’s Centennial with a series of talks focused on the changes and innovations we should expect to see in the next 100 years, and the iconic Canadian actor is slated to chat about the importance of living with a spirit of curiosity.

Tickets to the event are available online, and lucky attendees will learn about the possibilities that await them if they too, decide to do the same.

What advice would you give to someone who’s never watched Star Trek before?

I would say go to a some undefined station that’s still playing Star Trek and start at the beginning. It will only take you four years to catch up on the Star Treks and be knowledgeable about the pop culture.

What do you think about Vancouver, otherwise known as Hollywood North?

I’ve been to Vancouver quite often over the years. I’ve watched it grow, and to my sorrow, I never bought there – it was too expensive even then.

I get exhausted and I live my life exhausted.

Tell me a bit about your childhood?

I don’t talk about it because I’m ashamed of it. I grew up in Montreal, I went to school and graduated from McGill. During the summers when I was a kid I explored the ochre mountains surrounding Montreal. I lived in the woods, skied in the mountains, while going to school.

What do you think about the U.S. presidential election?

I think that there is an amount of chaos going on and it will straighten itself out. Luckily this didn’t happen in Canada – Justin was great.

You handle a lot of press, what’s that like?

Doing the interviews is a challenge. They ask penetrating questions and the press is difficult to answer.

You spend much of your time in the U.S. What do you think about Canadians?

Canadians are polite to a fault – when I’m in Canada and I ask people how they’re doing, they say “not too bad” or “pretty good”, or the latest one is “alright, up until now”.

What’s your favourite past time?

(pauses) Eating is my favourite.

Shatner’s bringing his interesting take on life to UBC’s upcoming centennial celebration. Titled as The Curious Life, the iconic Canadian actor will deliver stories about the fascinating places his curiosity has led him and the possibilities that await us if we’re willing to step outside of our comfort zones. A Q&A session will allow audience members to ask him questions in an open environment. 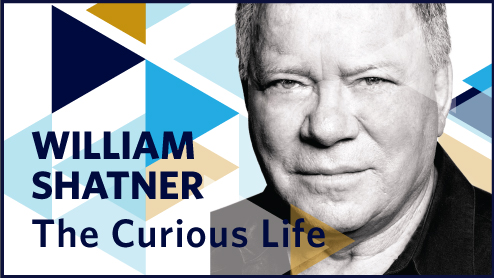