‘Ninety bottles of beer on the wall, ninety nine bottles of beer’ one guest on the WildSide Craft Brewry tour tries to get started on board the bus of twenty passengers. Vancouver’s craft beer industry has been catching speed in the past few years, and WildSide has decided to bring passionate Vancouverite’s and tourists closer to the action.

In six hours, four local craft breweries are explored in Granville Island, the North Shore and East Van. Brahm Candy, owner and driver, refers to Vancouver as the Wild West of brew towns when compared to established markets such as Portland’s. Vancouver’s craft breweries are young, enthusiastic, and experimental as you see for yourself on the tour. 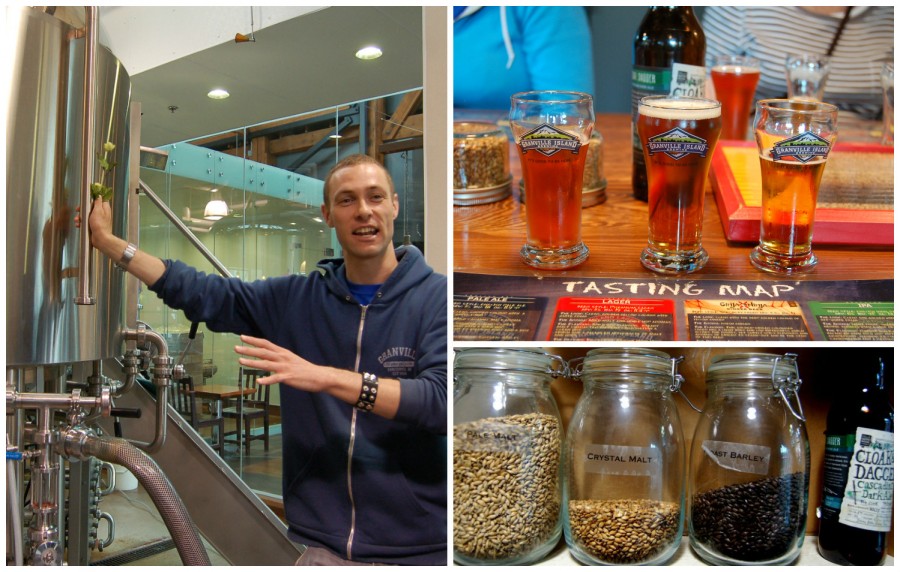 First stop is a Van staple and also the first micro-brewery in Canada- Granville Island Brewing Company. Here you learn about the process of brewing a beer through a tour of the facilities. One thing you may not have known is hops is actually a flower. So when someone tells you it tastes hoppy, you’ll have a better idea of what they mean! Listen closely, because there will be a Jeopardy quiz later and prizes up for grabs. Jess Benison, Shop Steward and tour guide, gave one excellent tip- on a hot summer day vanilla ice cream and raspberry ale make the perfect float.  After the tour, three different Granville Island brews are taste tested.

Bridge is a husband and wife run operation housed in a small garagesque space in North Van and the next stop on the tour. The first nanobrewery, Bridge started only a year ago and is trying to keep up with demand. Most of their customers are locals. 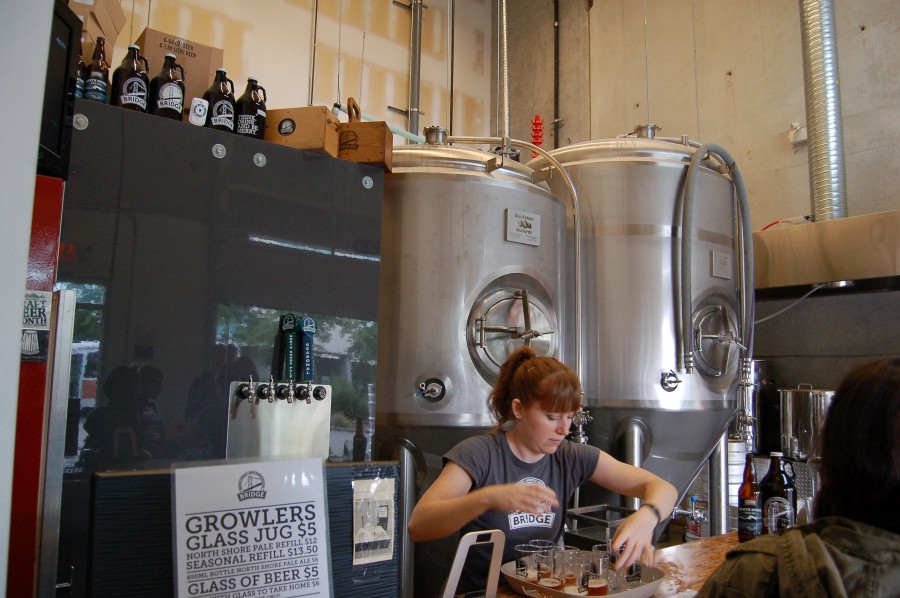 A man next to me pledged his allegiance, “You can’t drink that big brewery stuff, smaller is better”, while filling up his growler. A growler runs at $5, holds roughly 2L of alcohol, can be refilled for $10 at most micro-breweries in the lower mainland and is eco-friendly. A fact I was happy to learn! Bridge has two types of beer, an IPA and a seasonal, and runs a garbage free facility. 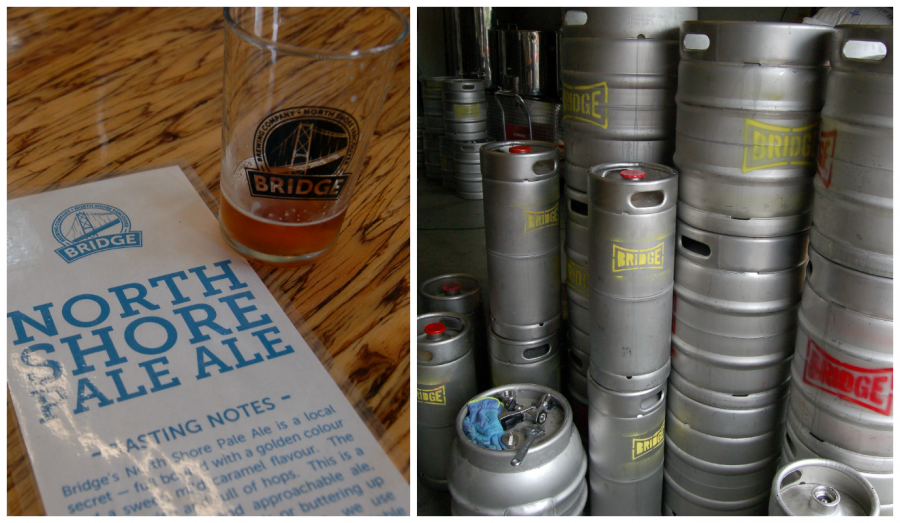 Where there is beer, there must be food! This stop also included lunch from the local and sustainable Crab Shack which boasts a picture of the owner and Arnold Schwarzenegger on the wall.

Heard of the Seedspitter? The unfiltered Belgian Wit beer with a watermelon finish by Parallel 49 is taking over patios this summer. The next stop takes us to their brewery. 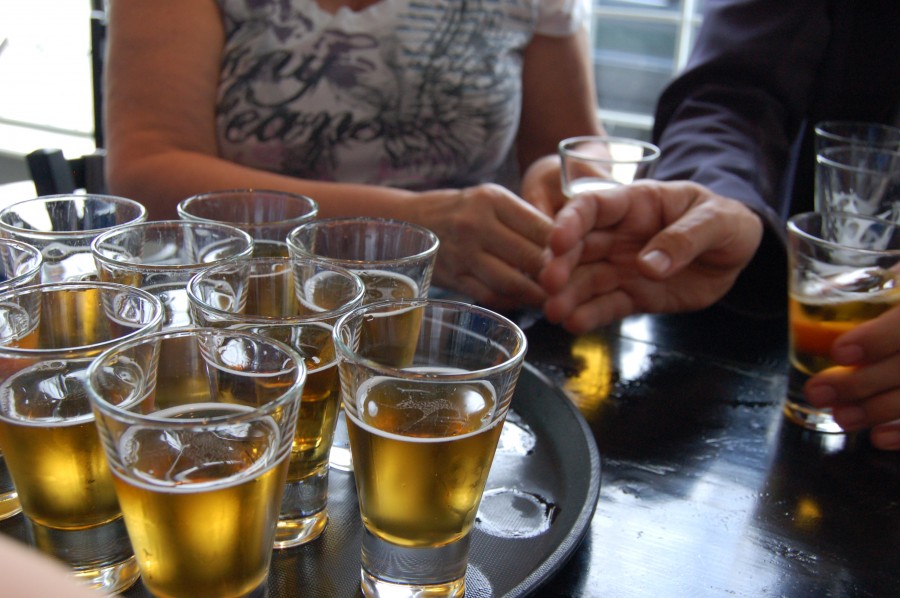 Only a year old and started by the guys behind St.Agustines, Parallel 49 is known for its creativity with brews such as Mystery blend, Hopparazzi, and Gypsy Tears. Here we sampled five tasters, and the bus loaded back up with plenty of six packs for later and some freshly filled growlers. 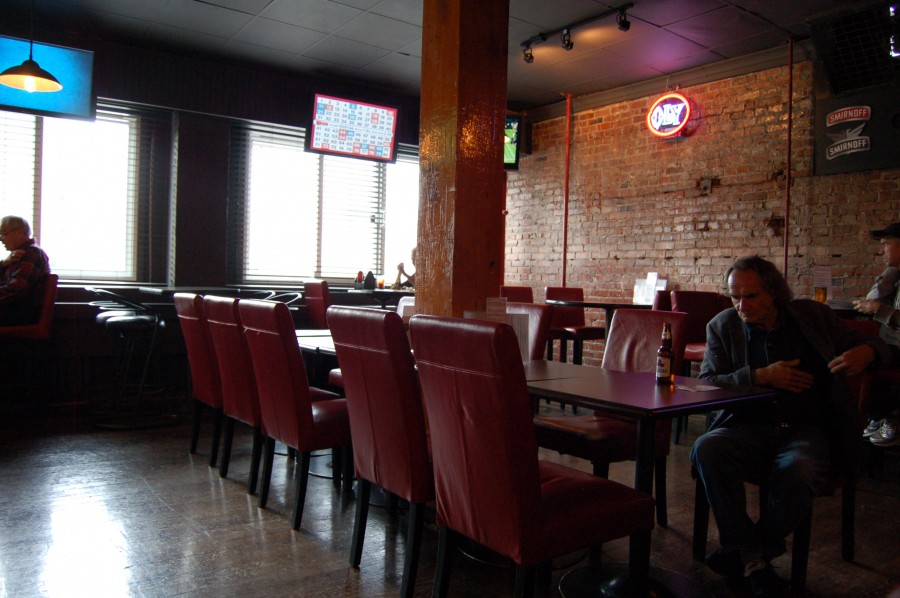 Last stop is Vancouver’s 100 year old pub tucked away on East Hastings, Pat’s Pub, which brews it’s own beer inside the pub. Pretty badass! The newly redone pub prides itself on the pureness of it’s in-house beer, sticking to only the four basic ingredients (jeopardy question) and is 100% preservative-free. The most samplers came at his location. By this point, serious bonding had occurred within the group and everyone was cheering and giving out high fives over pull-tab wins. Snacks are also served since despite a full lunch the whole bus had developed the munchies.

WildSide’s brewery tour is the perfect field trip for adults. The tour is run by passionate guides, and takes you around to the proud craft breweries that are putting Vancouver on a map. Between the stops, the guides kept everyone entertained with Jeopardy style trivia, prizes and some pretty fascinating facts you didn’t know about Vancouver. Bet you don’t know how  the Steam Clock and SteamWorks are connected! With a demographic ranging from early twenties to plus 65, everyone on board has a sense of humour. No surprise there, a craft beer tour is sure to attract the right crowd!

Written and researched by Alina Anghel, a Columnist at Vancity Buzz. Connect with Alina on Twitter @cheriealine.