The Hard Rock Casino Vancouver is planning to send summer out in style with two unbelievable events!

The final weekend of summer is fast approaching, but the Hard Rock Casino Vancouver is turning up the heat with two big events on Saturday, September 20 and Sunday, September 21.

Up first is a bash 164 years in the making – Jack Daniel’s birthday.

Fitting this party should be held in Hard Rock’s Asylum Sound Stage, because this party is going to be nuts. Doors open at 9 p.m. and the first 100 are free to enter, after that tickets are $10 each.  Loads of drink specials, live bands and a DJ, and what birthday party is complete without cake.

Then the good times roll over into Sunday where the Asylum Sound Stage will play host Comedy Night with three of the best young comics today. Starting at 8 p.m. let Erica Sigurdson, Graham Clark and Sunee Dhaliwal will tickle your funny bone.

Erica Sigurdson is a twice-nominated standup comedian for Best Female Standup in Canada. With a record setting 29 appearances on CBC Radio smash hit The Debaters. In 2013 alone, Erica was invited to perform at The Vancouver Comedy Festival, The Winnipeg Comedy Festival, The Halifax Comedy Festival and the world famous Just For Laughs Comedy Festival in Montreal. Her ‘sugar-coated razor blade’ observations about life lead to The Post to call her “A Rising Comic Star!”

Graham Clark is a 3-time Canadian Comedy Award nominee and co-host of Maximum Fun’s Stop Podcasting Yourself. Clark is a regular on CBC’s The Debaters and has appeared at Just for Laughs, Halifax Comedy Festival, Winnipeg Comedy Festival, and Bumbershoot. He is a winner of the Yuk Yuks Great Canadian Laugh Off and has appeared on HBO’s Funny As Hell. He has filmed his own hour-long Comedy Now special for CTV. Graham is also the creator of beardpaintings.com, where he sells paintings made using his beard as a paintbrush and donates the proceeds to charity.

And finally, Sunee Dhaliwal may just be the fastest rising star on the Canadian comedy scene. Think of the funny guy in high school that both the jocks and the nerds liked. He’s a club and crowd favourite and has already landed opening spots for top Headliners like Mike McDonald, Jo Koy, Sugar Sammy and Charlie Murphy along with performing in Montreal at the Just For Laughs Festival.  Sunee Dhaliwal is definitely one of those Comedians that you will be saying a few years from now “I saw him when…” The sky is the limit for this young man.

Tickets for both events are still available, but grab them soon as they are going fast. 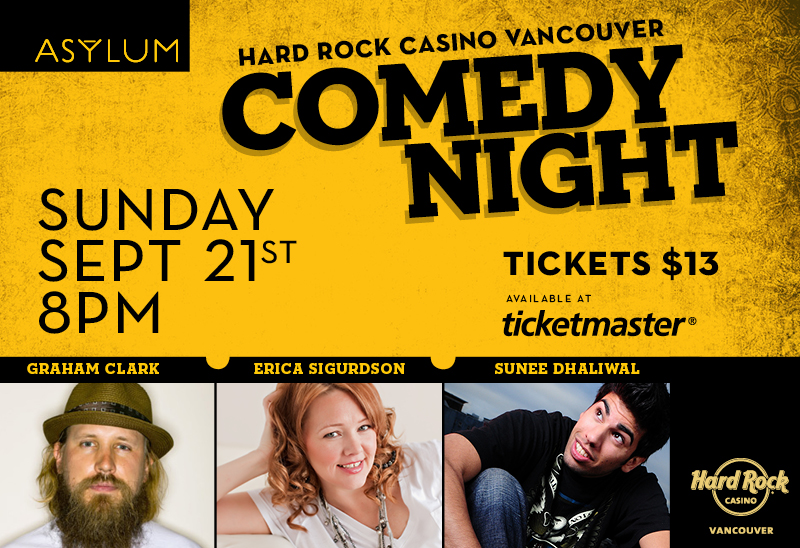