Sleeping Dogs is 2012’s sleeper hit because of its vision, charm and execution. It caters to gamers who want a violent, cinematic adventure with a solid story set in an open world. It has sold over a million copies internationally and has solidified Vancouver’s United Front Games with a strong cult following. If you haven’t heard of it yet, let me tell you why Sleeping Dogs makes a great gift this Christmas to yourself or a gamer friend. If you have, read on for a chance to win a signed poster from the development team!

The story is inspired by the grittiness and intensity of Hong Kong gangster movies. The main character, Wei Shen, is an undercover informant for the HK police department whose mission is to bring down a Triad boss by getting close to him posed as the gang’s enforcer. Not only are you tasked with dirty work to prove your loyalty to the Triad, but you’re given side missions by the police to investigate from the inside.  Like any great open-world game, the story’s narrative is never lost regardless of what order you choose to do your missions. All the while, you learn more about Wei’s motivations and his balancing act between right and wrong. If you enjoyed the movies The Departed or Infernal Affairs, you’ll love this game. 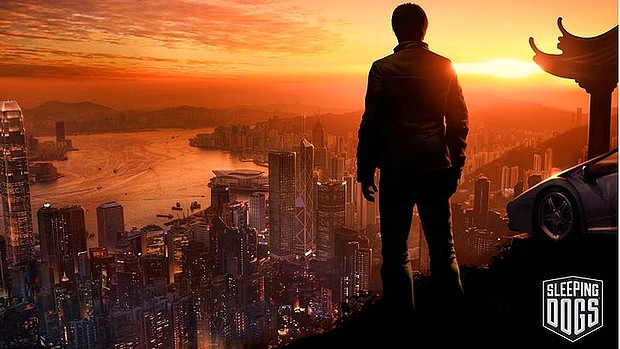 The gameplay is built around dozens of game modes that seamlessly interchange. A conversation can go sideways and turn into a chase through enemy territory where a gang fight can transform into a shoot out and then into a high speed pursuit. UFG has hired from studios all over Vancouver and staffs developers from games that specialize in racing (Need for Speed), open-world gameplay (Bully and World of Warcraft) and combat mechanics (Prototype and Scarface). It’s because of the experience of their staff, whom draw from 26 countries from around the world, that this game feels extremely well rounded.

Sleeping Dogs feels organic and natural. Through out it, your choices subtly affect your gameplay experience. At the end of each mission you are awarded police or Triad points based on the actions you take to complete it. For example, like in roleplaying games, vendors in the world who recognize your reputation as an outright good guy or bad ass can choose to help you out or not. You can also upgrade Wei Shen’s abilities at your own pace and to your own gameplay style, meaning two people can finish the game with very different final characters.

The characters in the game really stand out to me because of their attitudes that are portrayed through good scripts and voice acting. Each is distinct and your interactions with them draw you further into the story. I had the opportunity to meet with UFG producer, Dan Sochan, who told me that the game is filled with these kinds of characters. “In one of the more subtle missions you mess with this guy’s feng shui. You meet this guy named, Old Salty Crab, who is an interesting character with fantastic dialogue.” Dan noted that people in the online community and forums specifically ask for more of him in the the DLC and call for him by name. They were probably pleased to see him in the downloadable halloween levels “Nightmare in North Point”, an imaginative step outside of the gangster genre and into the chinese supernatural.

This game is one of my top holiday picks and one of my favourite games to come out of Vancouver for 2012. The recreation of Hong Kong is stunning during both the day and night time, and while walking around town or racing through it. The open-world sandbox gameplay leaves you tons of variety and opportunity to create funny moments or to just explore the game’s possibilities. The martial arts fights are tight, challenging and gratifying while the gun fight scenes are plentiful and explosive. This is a shining addition to your collection and supports Vancouver’s game development scene.

United Front Games gave us a signed Sleeping Dogs poster to give away to a lucky super fan! To make sure it does go to the right gamers, please post a comment with your favourite character or moment in the game to enter this contest and this sweet poster could be yours! The contest closes Monday, December 3rd. The winner will be emailed and announced in this blog!

[UPDATE! – Congrats to EVAN for winning the SLEEPING DOGS poster that was signed by the UFG Studio! You will be contacted via email!]