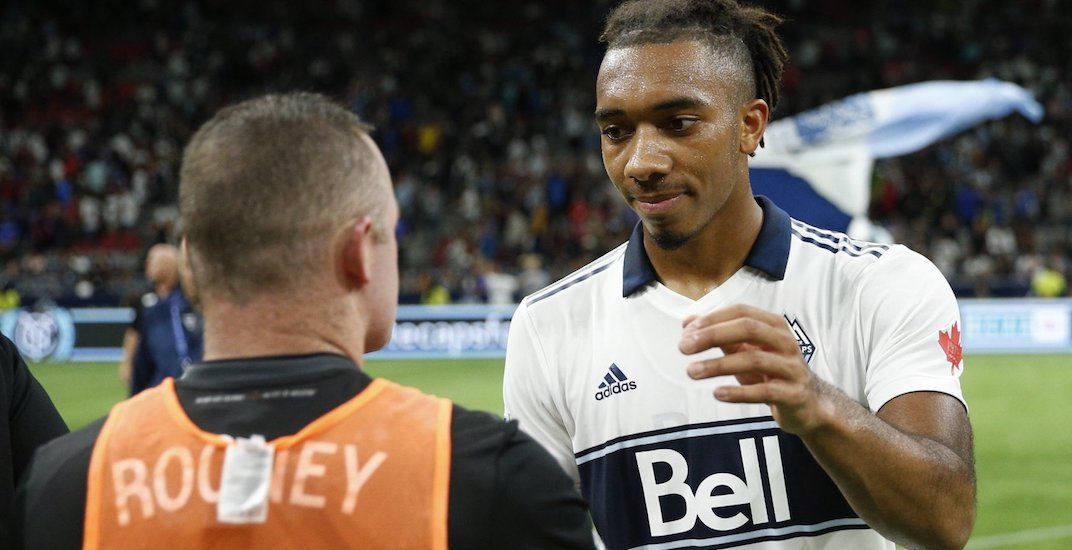 The Whitecaps snapped their two and a half month home losing streak thanks to a convincing 1-0 win over Wayne Rooney and DC United on Saturday. Yordy Reyna scored his fifth goal of the season, and Max Crepeau made two saves for his fifth shutout of the season.

“Any clean sheet feels amazing,” Crepeau told reporters post-match. “At that point, it’s three points. After that, it’s keeping a clean sheet. If it’s against Rooney, even better. It’s a great evening.”

The Whitecaps scored the lone goal of the match in the 18th minute after Russell Teibert set up Reyna for a curling strike inside the far post. Outstretched, DC United keeper Bill Hamid got his hand to the ball, but it wasn’t enough to turn aside Reyna’s strike.

“It was a good goal by Yordy,” Teibert explained. “If he can get close to the box, he can have a good strike at net. Get the ball to Yordy, he’s going to score.”

After going 85 days without a win at BC Place, Vancouver recored their sixth win this season.

The Whitecaps improve to 6-12-9 on the campaign with 27 points. Ben Olsen and his DC United squad will head back to “The District” with 39 points from a 10-8-9 record.

Saturday marked the first visit for England and Manchester United legend Wayne Rooney. A sold-out crowd of 22,120 cheered for Rooney during player introductions.

Whitecaps Coach Marc Dos Santos had some key pre-match advice for his team.

“What I told the players before the game is, even if many people come to see Rooney, the sum of our parts have to be the difference maker. I think that today in every facet of the game, in everything we did, there was such a commitment from everyone. I’m proud of that, there’s no sign of this team giving up.”

The 33-year-old Rooney earned a mixture of boos and cheers throughout the opening 45 minutes. A smattering of Manchester United kits could be seen among the supporters in attendance. In what was likely his lone appearance in Vancouver, Rooney failed to deliver. DC United, finished with 24 shot attempts, but only two on target.

It was a frustrating night all around for the all-time England leading scorer.

Rooney was subbed off in the 74th minute to a loud round of applause. As he exited the pitch, Rooney had a few choice words for the fourth official, Pierre-Luc Lauziere, appearing to say: “Every f**king game. Every f**king game.”

Daily Hive spoke to Rooney post-match to find out why he was so upset.

“Because I have my opinions of the referees,” Rooney explained. “It’s not very good. I feel they need to improve the game. That’s my opinion, and I feel like I’m entitled to my opinion. I said a couple of weeks ago, I got kicked, and the referees do nothing.

In the 72nd minute, a fan in a Manchester United kit ran halfway across the pitch towards the sidelines. The overzealous individual completely missed Rooney, and was grabbed by Whitecaps Public Relations Manager Nathan Vanstone.

“I actually didn’t see the pitch invader.” Rooney explained. “I played in a pass, and ran into the box. I didn’t know why the game was stopped.”

“Is that what it was?” Rooney asked.

“I didn’t see it. It’s sad when people interfere, it’s not good for anyone, the fans, or the players. It stops the game.”

Here for the @WhitecapsFC NOT Rooney #VWFC #tifo #WhitecapsFC pic.twitter.com/kQPvw2UP3w

While some fans did come to see the Whitecaps, the home side was in control. Vancouver played a compact, structured, solid 90 minutes of football. DC United looked frustrated, and that was in part to the Whitecaps’ solid defensive game plan.

Vancouver had several opportunities to break through for an insurance goal. Derek Cornelius forced Bill Hamid into a leaping one-hand save. Moments later, Reyna fired a long distance strike that struck the crossbar. Vancouver did not park the bus.

The Whitecaps will look to carry their momentum on the road next week when they visit the San Jose Earthquakes on August 24, and the Montreal Impact on August 28. Vancouver will host New York City FC on Saturday, August 31 at B.C. Place.