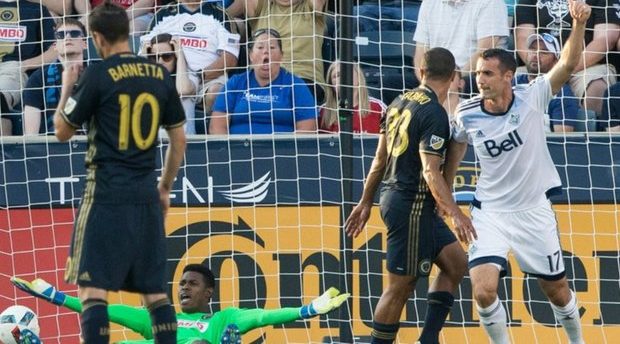 The busy Vancouver Whitecaps (W7-L7-D3, 24pts – 4th Western Conference) played their third match in eight days against the Philadelphia Union on Saturday night. Despite falling behind early, the Whitecaps scored three unanswered goals to beat Philly by a final score of 3-2.

Major League Soccer recently took a two week break for the Copa América Centenario, which has been hosted in cities across the United States. The break came at somewhat of an inconvenient time for Vancouver, who were enjoying their best run of the season. The Whitecaps went into the break with 3 wins, 1 draw and 1 loss in their previous five matches.

The Whitecaps were not idle during the first half of June, with 3 players away representing their countries at the Copa América and the rest of the team playing a pair of Voyageur’s Cup semifinal matches against the Ottawa Fury.

MLS resumed play last weekend, and the Caps looked less than convincing in the 2-1 loss to the New England Revolution. Add the 1-0 midweek Voyageur’s Cup first leg loss to Toronto FC into the mix, and concerns about the Whitecaps’ form and consistency were back at the forefront.

Vancouver fell behind early when Roland Alberg put the home side on the board in the 14th minute. The goal, and apparent handball by former Whitecap Sebastian Le Toux, appeared to motivate Vancouver, who scored their first goal of the match through defender Andrew Jacobson just five minutes later.

Before it was over the ‘Caps added goals from Kekuta Manneh and Christian Bolaños. The Union managed pull within a goal late in second half injury time, but Vancouver manged to hang on for the win.

This was only the second come-from-behind win since September 2014 for the Whitecaps, and ended the Union’s 10-match undefeated streak at Talen Energy Stadium.

No Rivero, No Problem?

Rumours have been running rampant in recent days that Whitecaps striker Octavio Rivero is on the verge of signing a deal with Chilean club Colo Colo. While a transfer has not been announced by either the Whitecaps or Colo Colo, Rivero was not dressed for the match against the Union.

Octavio Rivero is currently with the team in Pennsylvania but will not dress for the match. We have no further comment at this time. #VWFC

With no Rivero, and Masato Kudo still out with a broken jaw, Carl Robinson opted to start the once again relevant Erik Hurtado. Hurtado, who was loaned to Norwegian club Mjøndalen IF last season, has been enjoying a personal renaissance with the Whitecaps in recent months.

Hurtado had another good match for the Whitecaps. Bolaños, who represented Costa Rica at the Copa América, had a quiet match, but delivered when it mattered. With less than 10 minutes left in the match Bolaños scored Vancouver’s third goal of the night and effectively put the match beyond the reach of the Union.

When the Vancouver Whitecaps made a trade with New York City FC for Andrew Jacobson earlier this season, the journeyman midfielder was somewhat of an unknown quantity for the majority of Whitecaps fans.

The signing was obviously a move to bolster the depth of Carl Robinson’s squad, but it has proved to be one of the Welshman’s best, and possibly most underrated signings to date.

Jacobson has made just 10 appearances for the team so far, but 30-year-old midfielder brings a wealth of 7 MLS seasons with him, and his dependability and calming influence to those around him have made him an important asset to the team.

In addition to another solid outing replacing the suspended Kendall Waston, Jacobson also proved he can score the occasional goal. The goal, which is only his 7th of his MLS career, came five minutes after the Union opened the scoring.

Jacobson was quickest to react after Philly ‘keeper Andre Blake mishandling of Bolaños’ corner kick. He escaped his marker, and nodded the ball past another defender at the back post to get the Caps on the board.

The goal will have added meaning for Jacobson, who played for the Union for one season back in 2010.

The win over the Union was very important for Robinson and his team. The ‘Caps stumbled in the 2-1 loss against the New England Revolution last weekend, but were still managed to hang onto 5th spot in the Western Conference.

The Whitecaps have now moved into 4th spot in the Western Conference. The result of the San Jose Earthquakes versus LA Galaxy match is important to Vancouver. A win by either team will see them move ahead of the ‘Caps in the standings.

There is little time for the Whitecaps to rest and celebrate the win over the Union. The team will now travel back to Vancouver, and will play Toronto FC in the Voyageur’s Cup finale on Wednesday night at BC Place.