They came, they saw, and in front of over 20-thousand fans at Empire Field the Vancouver Whitecaps beat Toronto FC 4-2 to win their inaugural MLS game.

You couldn’t ask for a more perfect setting with the sun shinning and a view of the “white capped” it was something that would only happen just once at Empire Field.

15 minutes into the game the Whitecaps made history as Eric Hassli scored to make it 1-0 for Vancouver which set Empire Field into a frenzy.

Ponchos were given out before the game just in case in rained and to create a “white out” experience and after Hassli’s goal the entire field was littered with them and continued to happen after every Whitecaps goal.

Vancouver born Terry Dunfield then got in on the act scoring after a beautiful through ball was played by Davide Chiumiento to Dunfield where he made no mistake making it 2-0 for the home side.

“It was amazing, after I saw the ball go into the net I ran to find my family, I didn’t care if they were in the top row, I still would have ran to be with them in that moment,” said Dunfield.

Toronto would have an answer before the half was over with Canadian international, Dwayne De Rosario sending a shot over keeper Jay Nolly to make it 2-1 after 45 minutes.

In the second half the Whitecaps would increase their lead with goals from Atiba Harris and Eric Hassli to ensure the Vancouver 4-2 win over Toronto. 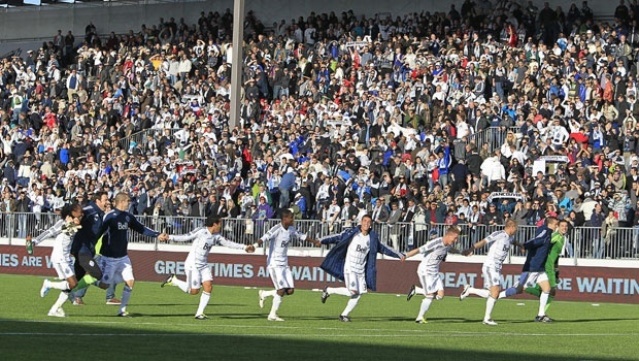 “It was something really special to be apart of,” said head coach Teitur Thordason.

“I hope we can build on this win for the rest of the season,” added the bench boss.

Vancouver will now head to Philadelphia for its first ever MLS road game on Saturday.