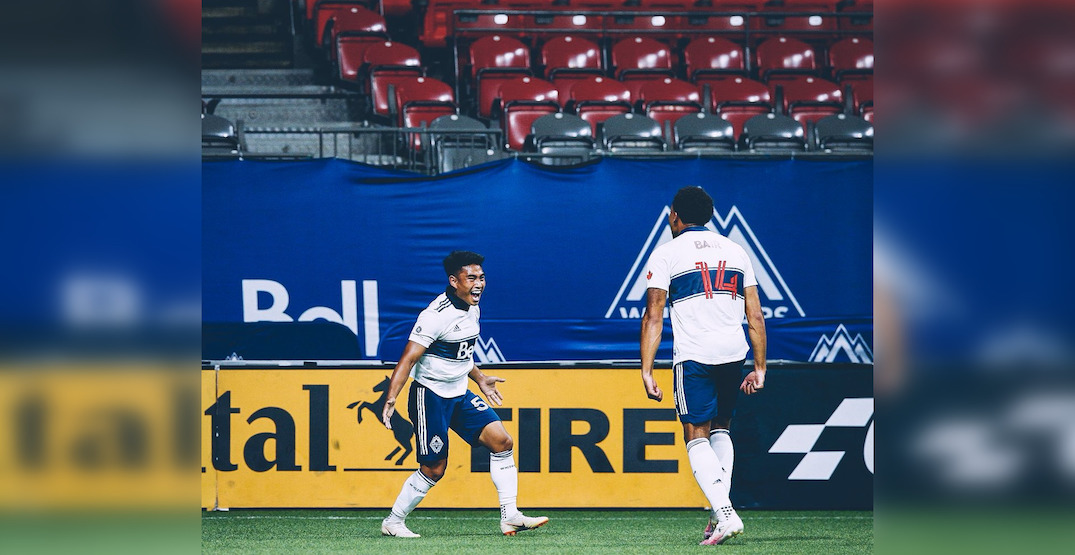 The Vancouver Whitecaps returned home to BC Place on Saturday night and earned their first home victory of 2020. The first live sporting event in Vancouver since COVID-19 put a pause on sports in March, meant that no fans were in attendance to watch Vancouver earn a 3-2 win in an entertaining back and forth match against Canadian rivals, Toronto FC.

What’s a player to do when they score a crucial goal, and there are no fans to celebrate with?

“I’ll be honest, it’s not the same at all,” Nerwinski told reporters post-match via zoom. “It’s always great to have the fans in the stadium, you feel the atmosphere. You know, it’s funny when I scored, I ran over to the corner, I was like why am I running over to the corner. There’s no fans, but I just didn’t really know what to do. So I went over and celebrated. We know that they’re watching, we know that they’re supporting, we’re happy to give them something to cheer for and something to look forward to.”

Being able to hear the roar of the crowd can provide a significant boost for a team looking for a spark. Without fans there to watch, it can be a challenge for an athlete to get pumped up. Players feed off the energy from the crowd and seeing family and friends in the stands.

“This is what I live for,” Cavallini explained to Daily Hive post-match. “This is what I do so with or without fans, this is a passion for me. That’s how I live my game each day. It’s something I live for. Obviously, not only do I play for myself now, having a family, I play for them as well so it’s a big motivation for me every day.”

In an effort to try and create a familiar match-day environment, piped in crowd noise was played throughout the match. On the very first Toronto corner kick, a “who are yah, who are yah,” chant was played in the empty stadium.

The Whitecaps received a blessing from supporters to be able to use their chants during the match. The crowd noise that was heard in stadium, and on the television broadcast was pulled from old stadium records to provide crowd authenticity.

On a warm and sunny day with a few clouds in the sky, the BC Place roof was closed.

The massive high-centred scoreboard that hangs in the middle of BC Place was noticeably turned off. There were no player introduction videos, instant replays, stats with information on substitutions, cautions, or fun facts. It simply remained blank. 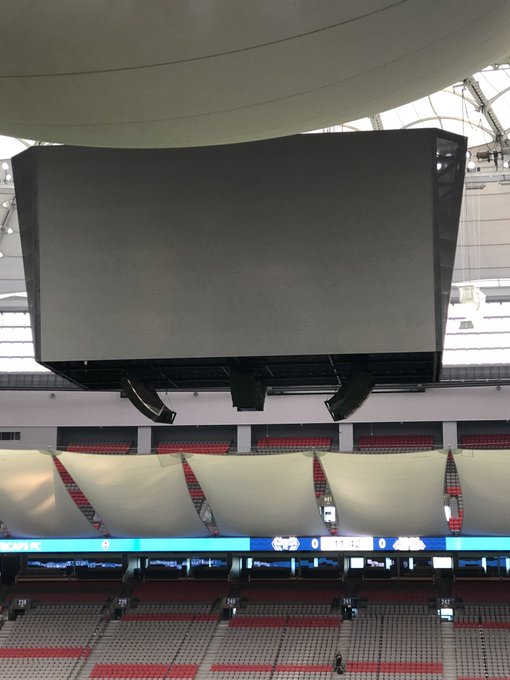 A blank BC Place scoreboard on September 5, 2020. Photo: Harjeet Johal

Although there were no fans in attendance, select print media, and photographers were allowed inside to cover the game. Masks were mandatory and social distancing rules were in place. Attending media had to fill out a standardized health assessment earlier in the day.

Everyone who entered had their temperature checked.

The popular press box meal was a thing of the past — there was no race to see which reporter would claim the last cookie, the popcorn machine was nowhere to be found. Customary tea and coffee to fuel you… you had to bring your own, along with any food you wished to eat.

The press box featured 12 reporters safely spaced at a distance.

There was a special reserved seat honouring the memory of journalist Mario Rodrigo Valdes, who passed away on April 13, (non COVID-19). Valdes was a friendly, kind soul, who was well respected for his passion covering the Vancouver Whitecaps for several Spanish-based outlets.

Prior to kickoff, both teams met together and linked arms with a powerful message.

Together, #VWFC and @TorontoFC stand against systemic racism.

We must speak up and take action against racial discrimination.

Together, we can be a force for positive change.#BlackLivesMatter pic.twitter.com/sQ8udIKxjb

We're back at home, and we're off

Vancouver last played at home on February 29, a span of 189 days between home games. Canada’s strict 14-day self quarantine rules have prohibited American based MLS teams from visiting Canada. The Whitecaps along with Toronto and Montreal are playing against one and other for a total of six games for each team. Vancouver is currently 1-3-0.

The Whitecaps snapped a four-game losing streak, while also breaking a goalless drought of 396 minutes. Vancouver improves to 3-6-0 on the season, and currently sit 10th in the MLS western conference. The Caps will prepare for a pair of matches against the Montreal Impact at BC Place on Sunday, September 13, and Wednesday, September 16.

Yeah that was really really good.