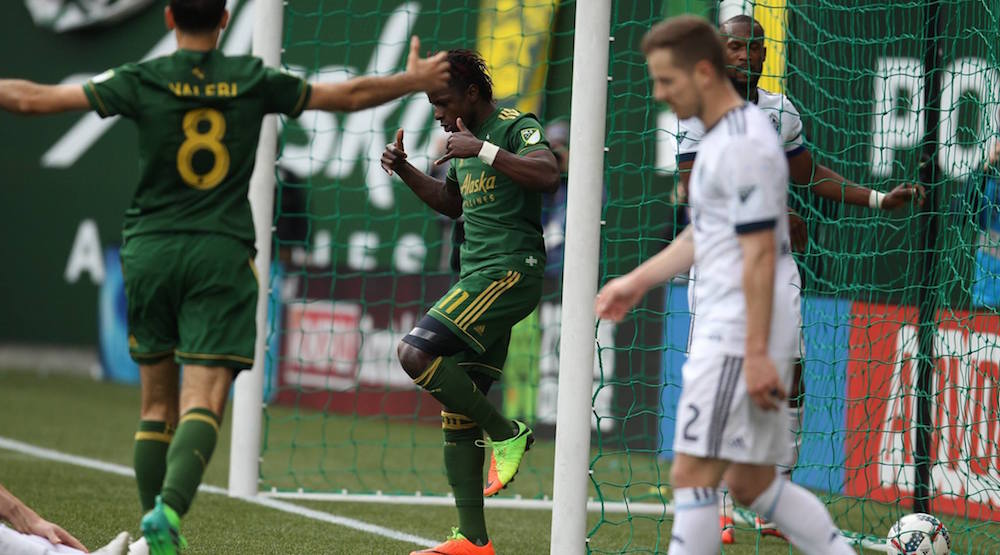 Dreams of a perfect Cascadia Cup campaign for the Whitecaps were dashed on Saturday afternoon, as the ‘Caps fell 2-1 to the Timbers at Providence Park in Portland.

An early wonder-goal by Darlington Nagbe set the pace and ex-Whitecap Darren Mattocks provided the eventual winner, though Vancouver striker Fredy Montero pulled one back after his attempted penalty kick was saved.

There are those who find head coach Carl Robinson’s rigid adherence to the 4-2-3-1 formation a thorn in their side. I am not one of those people; if anything, consistency is how you build an identity and allow a squad to find their form.

That said, when you’re going on the road against a playmaking linchpin like Diego Valeri, concessions must be made. Concessions like, say, a starting line-up of three defensive midfielders.

Unless Tony Tchani has suddenly become a playmaking attacking midfielder (or in soccer parlance, a “number 10”), that’s not going to be a team that starts in in a 4-2-3-1. With that personnel, you could play as a midfield-clogging 4-3-3…

…or a 4-1-4-1, with ten players committed to the back while Montero works alone up top.

It’s a nice bit of tactical planning that identifies the prime Portland threat with striker Fanendo Adi suspended. In theory, shutting down Valeri neuters the Timbers.

Revenge of the draft picks

When Vancouver entered MLS in 2011 with Portland, they ended up with the first overall pick at the SuperDraft. In a move that shocked observers across the continent, Vancouver went somewhat off the board and picked Omar Salgado.

The following year, Vancouver did much, much better with their second overall pick, selecting Darren Mattocks. The Jamaican striker would show plenty of promise, but his inconsistent finishing never meant Mattocks realized his true potential.

Last March, Mattocks was traded to Portland to be reunited with his old university coach (and current Timbers head coach), Caleb Porter. He’s had one goal in nineteen appearances since.

.@DarrenMattocks cashes in on that near-post run.

Interesting note on that last goal: look how Valeri has drifted away from the central channel to avoid the pressure directed at him by the ‘Caps. Tactics are a fluid thing. For all his good planning earlier, Robbo still has work to do on reacting to a shifting landscape.

Was it a penalty?

It’s not often I praise the referees, so I’ll make sure I do it here. Chris Penso had a good game. The cards were deserved, the PK (non-)calls were correct and he let the physicality of the derby match play out without being excessive.

Then again, Penso didn’t gift the ‘Caps an equalizer to save my bet slip, so forget that.

The Whitecaps will play their second of four-straight on the road next week in Montreal.