If the CONCACAF Champions League quarterfinal was the scrumptious appetizer for our yearly soccer meal, the Vancouver Whitecaps’ Major League Soccer season opener against the Philadelphia Union on Sunday was a buffet table loaded with crackers, white bread, and ramen.

It was boring and wasn’t exactly pleasing to take in, is what I’m saying.

The ‘Caps and Union battled to a 0-0 draw in front of a crowd of 19,083 at BC Place. While there weren’t any goals to speak of, there were a few talking points — which is good, because otherwise I’m filling up space with pictures of dogs playing soccer.

And nobody wants that. The kid is all right 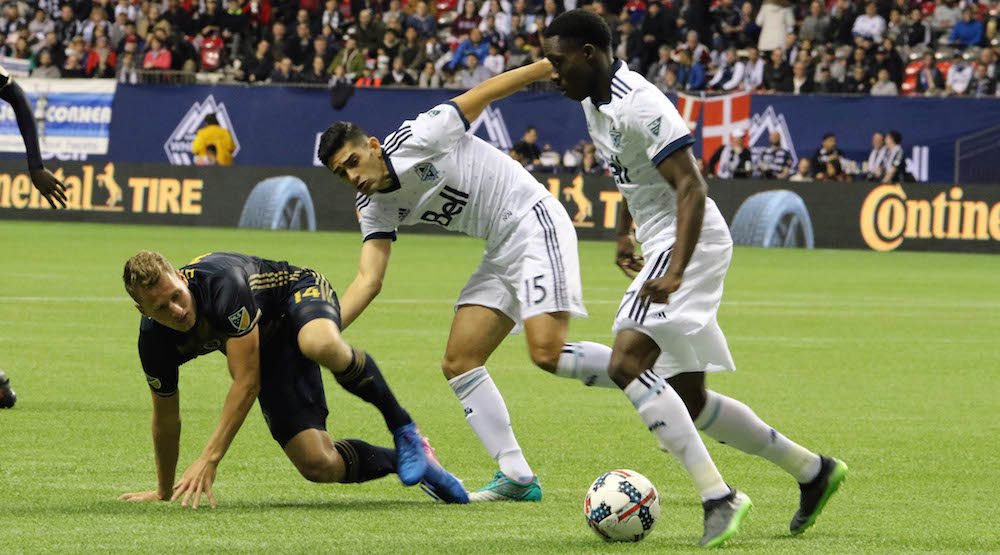 So, that Alphonso Davies kid is pretty good.

Once again: Davies is 16 years old. Dude is absolutely blowing the opposition away and making it look easy every time.

Well, maybe not every time.

He's 16 Gooch. Pretty sure this is a crime. pic.twitter.com/KqlEXRlUAF

For the record, Union defender Oguchi “Gooch” Onyewu was called for a foul but not shown a card on the play.

It was this close to being interesting

There were almost goals in this match. First, the mythical Champions League beast “Techado” made an appearance as Cristian Techera and Erik Hurtado combined forces.

24' Great build up to put Techera through on goal but attempt just misses the mark. 0-0 #VWFC #VANvPHI pic.twitter.com/TNiGZS1p7G

Note how this all followed Davies doing Davies things. Have I mentioned this kid before? No? Kid’s pretty good.

More to the point: Techera must hit the target from there. All that build-up for an ugly, scuffed shot? Goalkeeper Andre Blake is more than happy to casually watch those dribble out of bounds. The rest of us? Not so much.

The other goal-worthy chance was a legitimate one. Fullback Jordan Harvey hammered a stinging shot off a corner that would’ve beat Blake…

Harvey hits one on the volley but it's saved off the line! Game tied at 0-0 #VWFC #VANvPHI pic.twitter.com/UwjD1L7eKP

…were it not for the Union’s Keegan Rosenberry guarding the near post like a good fullback should. He’s like the Alphonso Davies of fullbacks, except not 16 years old, not Liberian-Canadian, and not an academy product. (Rosenberry is a former first-round pick in the MLS SuperDraft.) So, y’know, not really like Davies at all.

It is genuinely heartwarming to see Dean, a former top prospect, get a chance to shine with the first team. Injuries have absolutely ravaged Dean’s chances at cracking the lineup these last few years, a situation that has not toyed lightly on Dean’s psyche.

“I automatically jumped to the conclusion that my season was over – that I had failed and would not be able to prove myself otherwise,” Dean told the Whitecaps’ website last June. “I was scared of my parents’ reactions and how hurt they would be by the news. I was scared that I wouldn’t come back the same player.

“I am still scared that I won’t be that same player.”

Thankfully for us all, Dean looked confident and composed in his season debut, playing at times a bit aggressively but never being entirely caught out by the Philadelphia counter-attack.

If David Edgar remains on the shelf for 2017 and Kendall Waston relapses into his card trouble from past seasons, having a good-to-go Dean means the backline should remain solid regardless of what the season can throw at the ‘Caps.