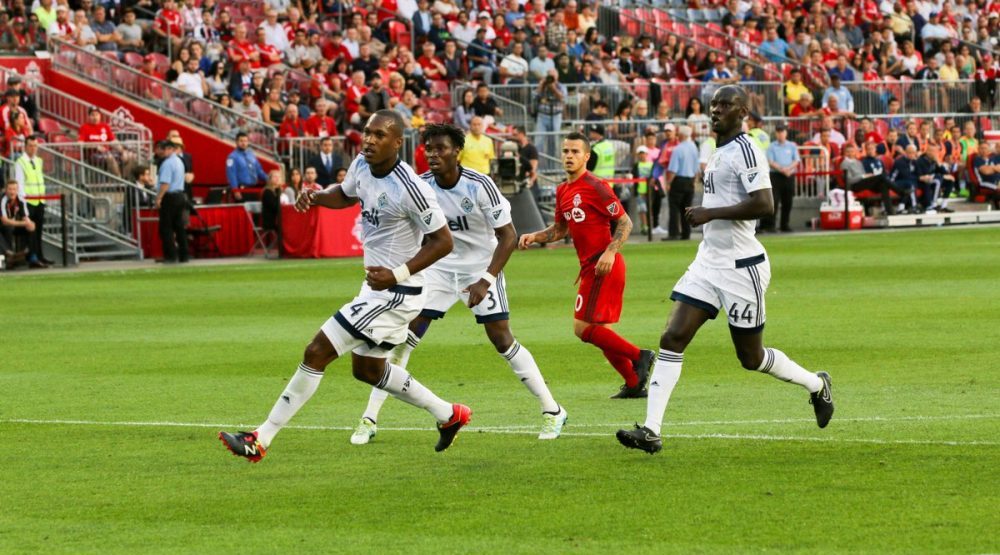 The Vancouver Whitecaps continued their journey to retain their Amway Canadian Championship with a loss in the first leg of the final against Toronto FC by a score of 1-0 at BMO Field.

After losing at home against the New England Revolution on Saturday afternoon, the Blue and White flew to Toronto to battle TFC in a rare Tuesday game. Italian Designated Player Sebastian Giovinco tallied the solo goal of the evening in the twilight of the first half. He was assisted by an unfortunate deflection off of academy product Sam Adekugbe.

The ‘Caps struggled to keep possession of the ball and positively build consistent attacking threats throughout the match. Combined with their now staple poor defending, the Whitecaps produced their second mediocre outing in only four days.

Pretty uninspired second half for the Whitecaps. Does anyone on the pitch want a win? #VWFC #canChamp

Here are my three key takeaways from the match.

Due to the short turnaround, the long travel to Ontario, and the availability of players, head coach Carl Robinson dramatically juggled his lineup in comparison to that which started against New England. The Welsh tactician made a total of ten personnel changes with only midfielder Russell Teibert starting both matches.

The troops that Robinson enlisted for the first leg of the final contrasted greatly to the young and inexperienced lineup that dressed for the semifinal away game in Ottawa a few weeks ago. Robinson introduced a much more balanced lineup that combined talent, youth and experience.

Considering the circumstance and the fact that TFC’s Greg Vanney deployed his best available team, the Whitecaps did their best to present their opponents with a team that could go toe-to-toe with them.

#VWFC brought nothing in 2nd half, subs didn't add either. Lackluster, but just down by 1.#VoyageursCup

The (Lack of) Pedro Effect

Robinson deployed a double midfielder pivot comprised of Teibert and McKendry. Throughout the 2016 season, we have grown accustomed to seeing Pedro Morales in that role next to Matias Laba.

Tonight, however, the Chilean maestro was tasked with the role of creative midfielder and played directly behind Octavio Rivero. It is clear now that Morales has exhibited some of his best football (if not his best) playing in a deeper role. Playing in front of the back four next to the Argentinian pitbull allows the Maestro to get more touches on the ball and places him in a more effective position from which he can play integral in creating attacking plays early in the transition.

Tonight, McKendry and Teibert’s main mission consisted of disrupting and protecting the back four. This passive role, while important to minimize damage, does little to create any meaningful at attacking threats. As a result, the the Chilean’s impact on the game was minimal and the captain was subbed off with 12 minutes still on the clock.

1-0 win for #TFC. #VWFC were better on balance of play, but only one goal down, you have to think they'll like their chances in 2nd leg.

When the Whitecaps lost by a score of 2-0 against the Ottawa Fury in the first leg of the semifinal a few weeks back, Carl Robinson mentioned after the game that his team had given themselves a “small hill to climb.”

Considering that the Fury competes in the NASL, when adjusting for difficulty due to facing an MLS rival with world class players such as Sebastian Giovinco and Michael Bradley, the Whitecaps have given themselves a mountain to climb in this return leg.

More than the goal conceded, Vancouver’s biggest challenge will stem from their inability to score an all too valuable away goal. As both teams set themselves up to face again at BC Place next week, Toronto has two advantages. They lead in aggregate score and they possess an ever-present threat of scoring a goal away from home.

When one considers the way Giovinco has been able to penetrate the ‘Caps weak defensive line every time they meet, it is not inconceivable to think that the diminutive Italian has more goals in the bag.

While the Whitecaps might argue that the 1-0 loss is a decent result, the reality is that lifting the trophy next week at BC Place became a much more difficult prospect tonight.