Midfielder Jun Marques Davidson was sent off in the 8th minute for a headbutt to the Union’s Keon Daniel in the back, reducing the Whitecaps to 10 players for the rest of the match.

Despite being down a man, the Whitecaps never gave up and put a lot of pressure on young Union goaltender Zac MacMath; the veteran presence of former Whitecap Sebastian LeToux however, made all the difference.

Center back Brad Rusin who had been strong since filling in for the injured Andy O’Brien, was pulled from the game in the 82nd minute due to injury and LeToux and the Union capitalized. His substitute, Carlyle Mitchell, was turned inside out by forward Antoine Hoppenot, who then scored on goaltender Brad Knighton.

The Whitecaps came into the game 7-0-3 at home this season, the last unbeaten at home team in the league. Their next match is against rival Portland Timbers this coming Saturday, in Portland. 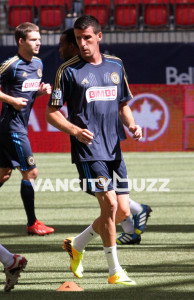