With the growth of the EDM (electronic dance music) scene globally, it is no surprise that the local scene is also booming. Vancouver EDM DJs are breaking grounds and spreading their locally born sounds across the city’s venues and beyond. Among those DJs is WMNSTUDIES, a dynamic duo bound to take over musical landscapes with their nu-disco, deep house grooves. On Valentine’s Day, WMNSTUDIES and local producer Pat Lok launched White Noise at Electric Owl and the monthly residency returns on March 7.

In 2009, after meeting in music school here in Vancouver, Zach Smith and Nathan “SaveMeBoots” Samson started WMNSTUDIES. Since then, the duo has shared the stage and opened for some big names in the industry such as Disclosure, Flume, Flight Facilities and more recently, Anna Lunoe. Their SoundCloud page features their remixes, which includes Rhye’s Open and Frank Ocean’s Thinking About You.

“That was our first track that got some exposure and things just really started from that one,” said Samson. “We like remixing stuff we both enjoy and we love all those throw back 90’s, R&B and hip hop jams. We were raised on it and they were big influences growing up.”

Among their recent remixes is local Vancouverite’s BESTiE’s Asleep on The Bus, and Merek’s Blue Lake- which gained major exposure on the Hype Machine. 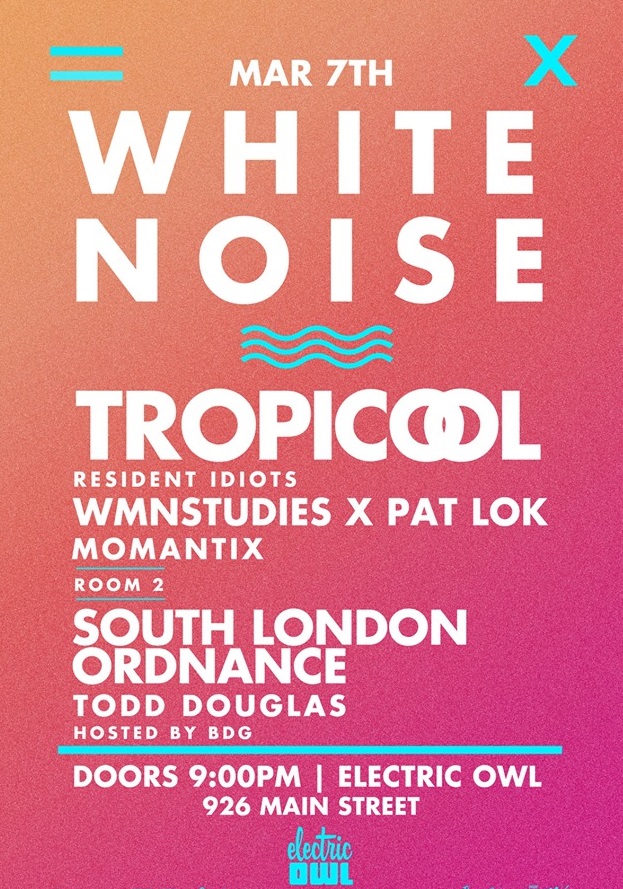 As major supporters of the local EDM scene, Pat Lock and WMNSTUDIES plan to showcase up and coming Vancouver producers, such as Momantix, while bringing some established international producers to join their monthly sets. On deck for this weekend are LA’s Tropicool and from the UK, South London Ordnance.

Check out the local EDM scene at work this Friday, March 7, at Electric Owl. White Noise falls on the first Friday of each month.