With October comes our natural tendency to seek comfort food, hot soups and baked treats. Nothing screams Fall like pumpkins! They make great lanterns for Halloween but they also make for delicious snacks, dishes or drinks. Vancouver chefs have created an array of heart-warming pumpkin-infused concoctions. Creativity is the name of the game and you might find pumpkin flavours where you least expect it. 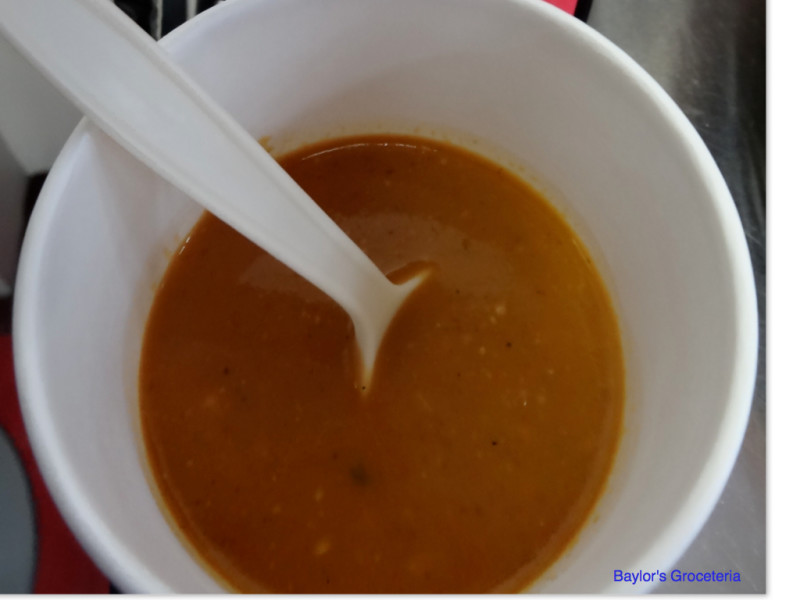 A pumpkin soup is probably the quickest way to warm up your whole body on a rainy day. Baylor’s Groceteria on East Broadway has put together an amazing version of the inviting creamy orange blend with a nice tangy kick to it. Apples, onions, tomatoes, coconut milk and about a dozen other ingredients all turn into a flavorful bisque. The added cashew purée thickens the soup while adding a nice crunch. The curried coconut pumpkin bisque is available by the cup ($3), by the bowl ($4) or as a one litre bucket ($9); an inexpensive way to get warm! The beauty of it all is that everyone can enjoy this dish as it is vegan and gluten-free. 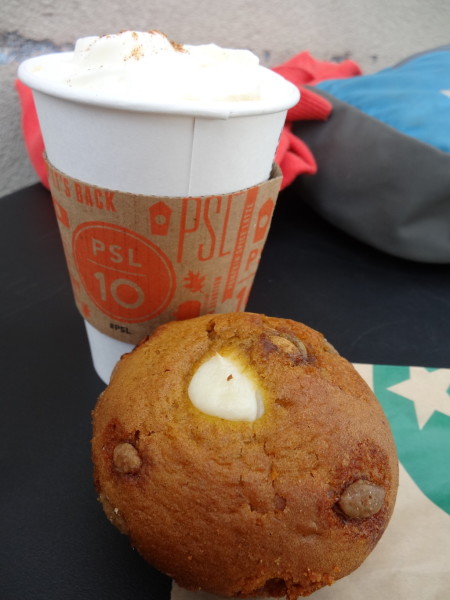 Pretty much every coffee shop in town has added a pumpkin spice latte to their offering in October. With a shot of espresso or chai tea, it is the perfect soul-warming drink. A special mention goes to Starbucks which has been offering its Pumpkin Spice Latte for a decade this year; no less than 200 million have been sold since it has been introduced. This beverage has become over the years one of the early signs of fall. The chain has also developed a number of baked goods, such as the pumpkin cream cheese muffin, the pumpkin scone and the pumpkin loaf. 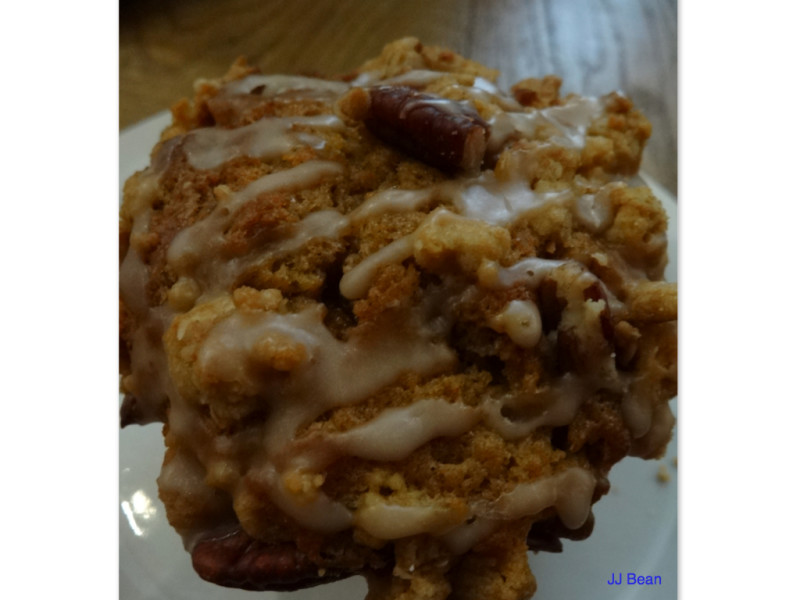 Handmade ravioli filled with pumpkin and Gorgonzola covered with hazelnuts and sage butter. Are you salivating yet? Run to La Buca, an Italian trattoria on MacDonald St. owned by the same pair as Pied-à-Terre and The Sardine Can. This neighborhood restaurant is charming and casual: perfect for a fall dinner! If you are still hungry for more pumpkin delights, JJ Bean bakes a pumpkin coffee cake with a chai glaze. . .suitable for coffee and tea lovers alike! As it is quite small, don’t plan on sharing. 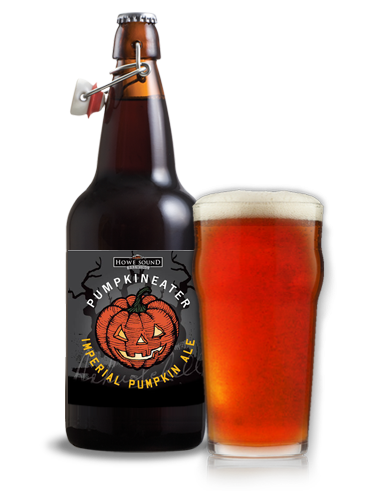 How about a Pumpkin Ale? It is as difficult to decide what a good pumpkin beer should taste like as it is to decide what is the perfect pumpkin pie. You may want to sample a few before making up your mind. Howe Sound brewery bottles the Pumpkineater made with barley, roasted pumpkin, hops, cloves, cinnamon, nutmeg and star anise. Granville Island Brewing promises a pumpkin ale that tastes like “fresh pumpkin pie” with dashes of nutmeg, cinnamon and clove. For a malty-spiced brew, go with Steamworks‘ pumpkin ale which includes nothing less than 100 lbs of pumpkin goodness and several spices. All pumpkin beers are offered for a limited time so don’t wait until eggnog becomes the flavor of the month to get a hold of it! 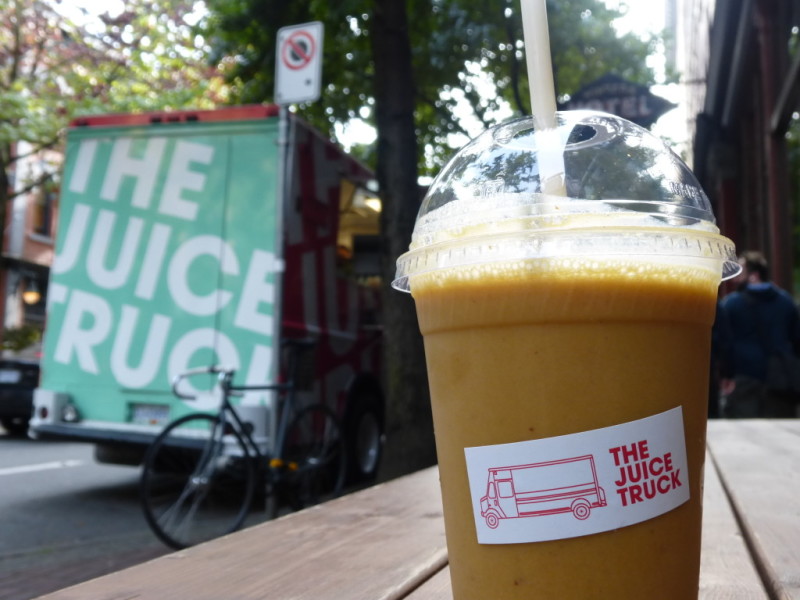 These days, the Juice Truck is testing different recipes to create a wicked pumpkin drink with their distinctive twist. Vancity Buzz was invited to be the first to test their latest concoction which was a delicious (and filling) mix of pumpkin purée, banana, cardamom, nutmeg, vanilla, almond milk and – quite a unique flavour pairing here – dates. Once fine-tuned, the smoothie will be added to their Fall menu available in a week or so. 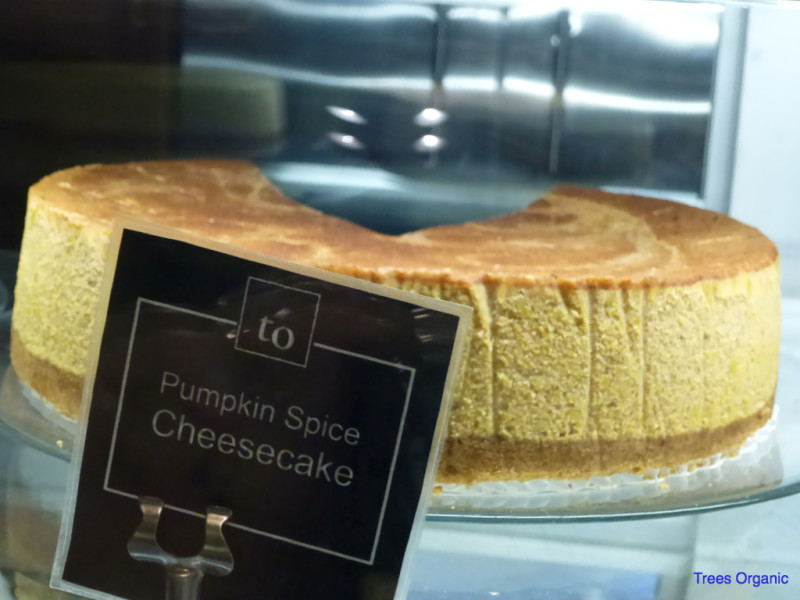 Over at Tokiwa Sushi, two types of roll with pumpkin are prepared all year long! The so-called pumpkin roll is served with a customary drop of house-made creamy curry sauce on top and Parmesan. A nice change in the vegetarian sushi scene! Regulars would not order a sushi plate without the very popular energy roll which contains tuna, pumpkin and a dollop of garlic lime sauce. Why not finish off your savory pumpkin meal with a slice of the creamy Pumpkin Spice cheesecake from Trees Organic? 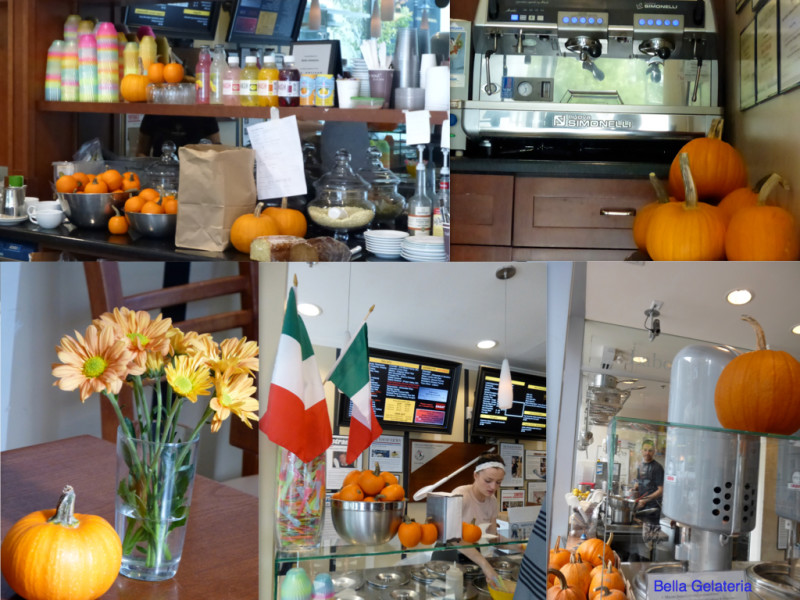 Last, but not least, the pumpkin pie is a must for Thanksgiving dinner. Again, there is no shortage of mean pumpkin pies and tarts all around town. A unique way to savour it is… folded in gelato! Not only is Bella Gelateria whipping up a mouthwatering Sugar Pie Pumpkin gelato, but the whole store has fall accents with mini-pumpkins sitting on tables, countertops and just everywhere! They are intended for kids visiting the store with their parents but really it is a fun place for everyone to get into the season’s mood.

Over to you, tell us where you get your pumpkin fix?