There are over 130 street food vendors in Vancouver and countless others around the world. The creativity that goes into these mobile kitchens is easy to notice and a quick survey of the varying trucks and carts shows the diversity of their equipment and design. And while Vancouver’s excellent carts have built a reputation as a Canadian leader in the food truck movement, there is an unsung hero in the street food revolution that gets less attention. Where are all these food trucks being built and who are the mad scientists that craft them? Look no further than Surrey’s Apollo Carts, worldwide leaders in food cart fabrication.

“Worldwide leaders” is a strong claim, I know. But who can argue when Apollo has been creating food carts for over 15 years and has satisfied customers across Canada, the United States, Europe, Australia and even the Middle East! Just take a look at this colossal (and incomplete) list of food carts they have built in the Metro Vancouver area:

How does a little fabrication shop in Surrey become a street food heavyweight? By creating food carts of the highest quality directly to the clients specifications. More than 15 years ago, Apollo’s Norm Kerfoot thought building high-quality hot dog carts would be a great way to help his fabrication shop crack into the lucrative US market. With initial success in the States, Apollo built it’s first cart for the Lower Mainland when the new Home Depot was built in Surrey.

Their reputation as an early leader in street food attracted the policy makers at the City of Vancouver, who consulted with Apollo in 2010 while they were developing Vancouver’s plan for a more diverse vendor landscape. Apollo has built over 1,000 mobile food machines and now build almost every new food cart that hits Vancouver’s streets.

Their Surrey shop is a hub of activity, with three or four trucks usually parked inside and in various states of development. The trucks don’t stay there for long, as once a truck enters the shop, Norm and his team of six employees usually have them completed in a month. Each truck takes roughly 300 man hours to complete. All of the trucks they build cook with propane and Apollo builds each one to the exact health and safety codes of its particular jurisdiction. They handle almost every aspect of the process, from finding and inspecting the perfect vehicle, acquiring and installing all necessary appliances, all custom fabrication and delivery to the final destination.

Over the years, they have built almost every kind of mobile food vehicle imaginable. They’ve installed smokers, wood-fire pizza ovens, espresso machines and built carts that sell only baked potatoes. They have created some memorable vehicles in the process, with one of their most talked-about designs being Vancouver’s Pig On The Street, an old VW Westphalia camper van that somehow houses three employees and pumps out some of North America’s best street food. Their imagination knows no bounds, as evidenced by a current project they are working on for an American client: a Mercedes Unimog radio truck that will soon serve be serving some bad-ass espresso! Seriously, is this not the coolest food truck ever? 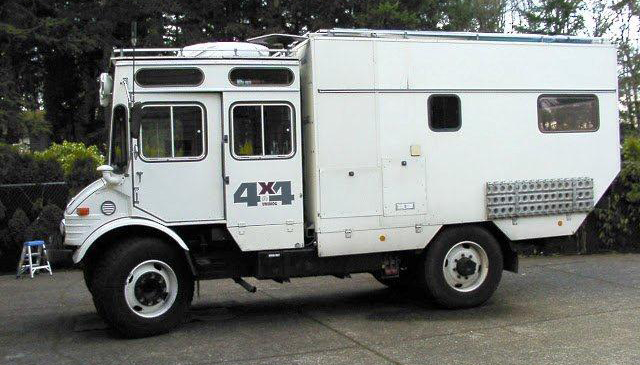 In case you were wondering, you can have Apollo build you your very own hot dog cart for about $15,000, all in. If you want a truck, that will cost you around $60,000. But don’t worry, that includes the Grumman. Better call now, as Apollo Carts are almost fully booked through April 2014. I guess that means Vancouver will be seeing even more innovative and eye-catching food trucks in the near future. Hopefully we’ll even get our own Unimog coffee truck.

What’s the coolest food truck you’ve ever seen? Which food truck should I profile next? Let the commenting begin!