As it turns out, we already knew that a Hurricane like Sandy was going to devastate the East Coast. Many people were surprised and shocked by the massive storm that ripped apart New York and New Jersey. It was just plain sand that told us it was coming.

A NASA database at Harvard for Astronomy and Physics has the details. Scientists taking samples in a marsh at Whale Beach, New Jersey, uncovered three very large sand deposits that were “fanned” out across the shoreline from a large flood. The sand goes as far as three meters (over nine feet) deep.

It’s ironic that the Hurricane that struck Monday was named Sandy. The sand deposits were left sometime between 1278 and 1438 AD and tell the story not one but two intense hurricanes that made landfall on the New Jersey coast. Often when a hurricane makes landfall, it pulls in all sorts of debris including tons of sand material known as “overwash”. Since the sand deposit was so deep, it means the storm was very big. Considering the frequency of the hurricanes, Sandy arrived on schedule. 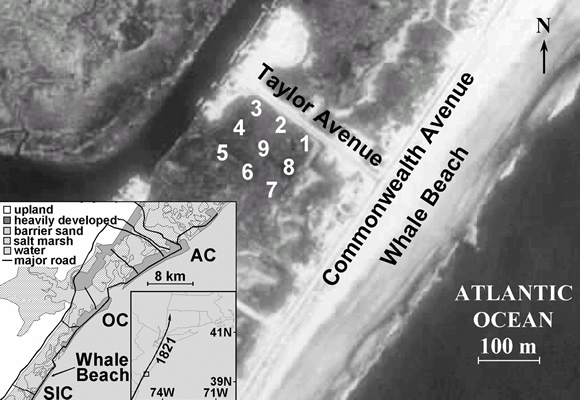 The image above from Brown University researchers describes where core samples were taken in 2001. There have been other hurricanes in the past as indicated by small deposits, but they did not match the intensity of these “prehistoric” hurricanes. Our knowledge of these hurricanes are only another reminder that history tends to repeat itself. We’ve long known a hurricane Sandy will strike, but large destruction like this still has a shock on us. 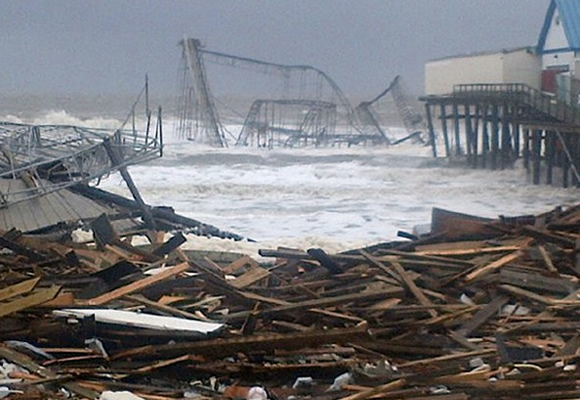 As we continue to grow our cities, the scale of destruction is going to get worse every time a natural disaster comes around. Since the last huge hurricane 700 years ago, we never would have imagined the boardwalk in Jersey Shore being obliterated by wind and waves. The image above is all that’s left of it. There is still uncertainty, however, if this is nature’s way of correcting fake tans and hair gel.

You can read the data for the geological study on the Jersey Shores here. Feature photo credit: debgalant.