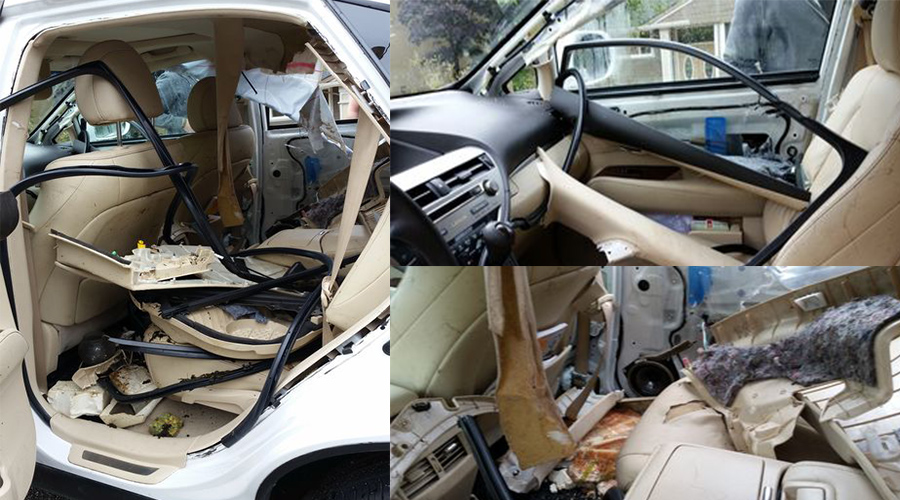 One West Vancouver family is down a vehicle after a bear caused $10,000 worth of damage to their white Lexus SUV to get at a “significant quantity” of food left inside overnight.

Bear fur and extensive claw marks were found throughout the car, but there were no injuries to report, Constable Jeff Palmer with the West Vancouver PD tells Daily Hive.

He says police were called mid-morning on Sunday after a family member noticed the damage to the car parked outside of their home in the British Properties. The car was loaded with food for an event that was set to take place the next day.

Palmer calls this an “annual event” that happens in the summer and spring months in West Vancouver.

“It’s really important for people to pay close attention to whether or not they are leaving attractants for bears. We’ve done media releases in 2012, 2013, and 2014 about people who had their cars broken into and trashed because they had left food or food scraps in their cars.”

He says it takes very little for bears to be lured in by food smells. One family had their vehicle damaged by a bear who smelled juice their child had spilled in the backseat.

“When a bear gets intent on getting into a vehicle, they can do a lot of damage in a big hurry,” Palmer adds.

In the end, humans aren’t the only ones at risk in these situations – the bears themselves may have to be killed if they continuously wander into residential neighbourhoods.

The West Vancouver PD has a few recommendations for people living in areas where bears are known to frequent: