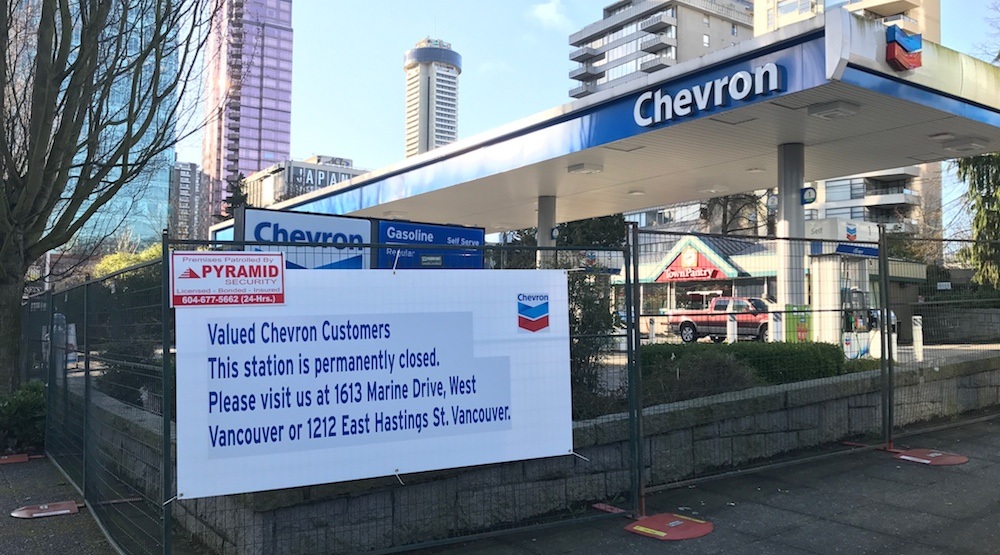 One of downtown Vancouver’s last remaining gas stations has shuttered its doors, leaving just a single location for drivers to fill up their tank while in the city centre’s peninsula.

A spokesperson with Chevron could not be immediately reached, but last summer the energy company announced its intention to close and sell its locations on West Georgia Street, 39th Avenue and Dunbar Street, and East 1st Avenue and Clark for the market value of redeveloping the real estate. The latter two locations have since closed as well.

“It is apparent to [Chevron] that these particular locations have a higher and greater land-use potential relative to their current operations,” Chevron spokesperson Adrien Byrne told Daily Hive in August 2016.

“Vancouver is a well-planned, liveable and vibrant city. There is an active real estate market in the city and we look forward to participating in that market through this solicitation process.”

All three gas stations sit on highly appraised land, according to the latest evaluation by BC Assessment.

The West Georgia Street station occupying one-third of a city block on the border of the West End and Coal Harbour is valued at $29.5 million. The adjacent White Spot property, which is largely a ground-level parking lot for restaurant patrons, takes up much of the remaining city block and holds an assessed value of $52.2 million.

Comparatively, the Dunbar Street station had an assessment of $14.44 million but was recently sold to local developer Wesgroup Properties for over $19 million.

The Clark Drive station located on the eastern border of the False Creek Flats is worth $5.56 million.