Victoria is sometimes condescendingly called the town of newlyweds and nearly-deads. To change the perception of the British Columbia capital as a place only for honeymooners and retirees, some of the city’s hospitality industry and entrepreneurs are turning to a most unusual demographic: The undead.

Ghosts, zombies, vampires and other paranormal beings are popular draws these days as Victoria prepares for Halloween, a holiday that you might think wouldn’t be a natural fit for a town not regarded for its nightlife or edgy personality. But Victoria is considered the most haunted city in Western Canada and there is an appetite for ghoulish fun, says Derek Lovell, one of the owners of Horror Escape, an attraction that yanks the idea of a haunted house into the 21st century. 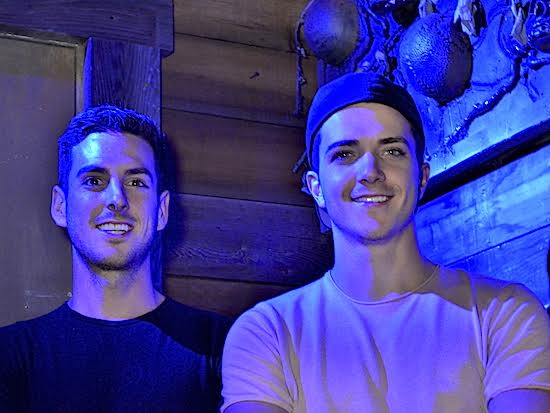 Escape room in Victoria via Vacay.ca

Tapping into the escape room craze, Lovell and his business partner, Jeff Roberts, have added sinister elements to their creation. The scare tactics in their maze give participants a reason to want to get out fast, besides the notoriety of solving the challenge quicker than anyone else. Escape rooms, if you’re not familiar (and I wasn’t until I participated in Horror Escape this month), involve trapping willing participants in spaces with no hope of getting out, unless they can solve the lock combination with the help of obscure clues planted within the scene. Or, they suffer the fate I did, which was to run out of time and then have Lovell open the door after 30 minutes and explain to me the obvious clues that I should have spotted.

“I’ve been going to haunted attractions since I was 13. I’ve tried lots of escape rooms and when I came to Victoria, I knew I wanted to bring that idea here,” says Lovell, who moved from Toronto to Vancouver Island with the intention of establishing Horror Escape this year.

Derek Lovell (left) and Jeff Roberts are the young entrepreneurs who have launched Horror Escape, a spooky attraction that is capturing the demand for the trendy Escape Room experience.

Lovell believes the Escape Room attraction fills a void in the Victoria tourism marketplace. With its splendid Inner Harbour, elegant hotels, ocean setting and friendly people, Victoria is recognized as a city for romantic getaways, whale-watching tours and scenic beauty. Despite being home to one of Canada’s leading microbrewery scenes, it lacks experiences for youthful and adventurous travellers.

“If you’re in university, there isn’t a whole lot to do in the city for entertainment when it gets dark, and we think we are a great option for people who want to come out with their friends for something fun and different at night,” Lovell says. 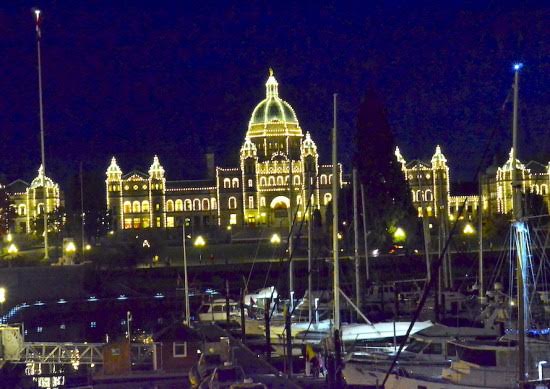 He and Roberts put intricate details into their sets and theme them on horror stories from popular culture. The set I entered was based on the crimes of notorious Chicago serial killer John Wayne Gacy, aka the Killer Clown. Horror Escape even sends a screaming clown wielding a chainsaw into the Escape Room to scare you to shivers. That set wrapped up last week and has been replaced by one based on The Omen, the horror movie classic.

The Escape Room joins the Ghostly Walks tour, which has been operating for more than a decade, as options for those who are into things spooky and paranormal. Modern-day Victoria is such a pleasant and tame town that you can hardly believe what a wild and tempestuous past it endured — until Kate Humble educates you.

Humble is a medieval historian and guide for Ghostly Walks. During the 90-minute tour, she describes some of the grisly tales of Victoria, including the spirits that reputedly haunt landmarks such as the revered Fairmont Empress Hotel and St. Ann’s Academy, a former convent that is now a government office building and National Historic Site. 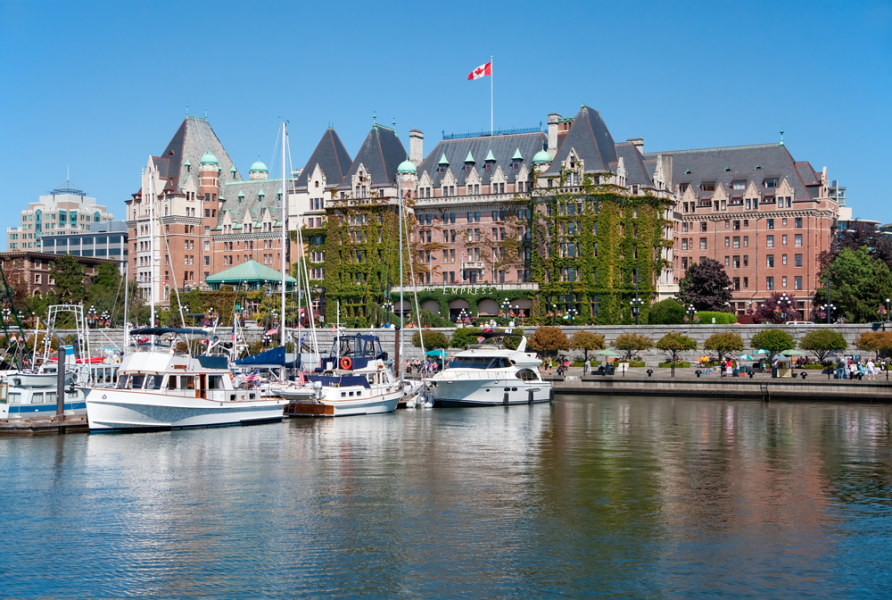 Humble says Victoria has an “infinite” number of haunted buildings, including private homes. If you are visiting the city, chances are the Ghostly Walks tour will tell you that your hotel has at least one ghost story tied to its walls. That’s what happened to me when I informed Humble I was staying at the Inn at Laurel Point, an exquisite contemporary hotel filled with natural light, warm wood decor and a terrific restaurant, Aura. It’s also built in the vicinity of some of the city’s most sensational ghost stories, according to Humble.

In the 1800s and early 1900s, people who owned the land would become susceptible to inexplicable death, including members of the esteemed Pendray family. In the 19th century, European businessmen cleared the property that had been home to sacred First Nations trees, unleashing bad karma, Humble says. The hauntings were so intense that the wife of one land owner died of “fright,” according to her obituary. “I have studied obituaries going back hundreds of years, even to the medieval times in Europe,” Humble tells her tour group. “This is the only one where the medical reports declared the person to have been scared to death.”

The Inn at Laurel Point is situated on James Bay. The hotel has a contemporary design with large, immaculate rooms, many of which look onto the water and offer views of Victoria’s famed Inner Harbour. 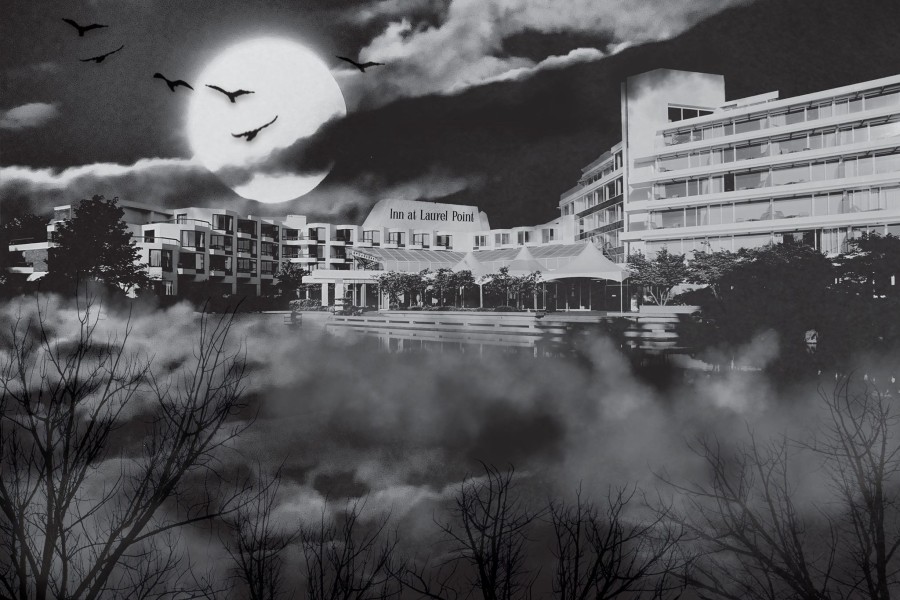 The hauntings aren’t limited to the inn’s property, either. Humble says several ghost sightings have been reported at the former Pendray family home, located less than a kilometre away from Laurel Point in what is now the Gatsby Mansion on the grounds of the Huntingdon Manor. Apparently Room 5 used to be the family’s master bedroom and apparitions turn up now and then.

The most haunted place in Victoria? A heritage building in Bastion Square that was most recently the home of the Maritime Museum of British Columbia is Humble’s choice. Built in 1889, the property was initially the seat of the Supreme Court of British Columbia and witness to many hangings.

“I’ve worked in the Tower of London and spent the night there and had no problem with it. I slept at the Maritime Museum once and you could not pay me to sleep there again. The place is seriously creepy,” Humble declares.

Ghostly Walks hosts about 12,000 visitors per year and during Halloween season the company will double its nightly walks from two to four. I’ve participated in many ghost tours in Canada and this is easily the best one, thanks largely to the storytelling ability of the guides and the fact they are historians who offer a depth of knowledge about Victoria and its intriguing past. The tours offer eight different routes, because there is so much ghostly activity in the city.

“There are more than 100 buildings that we tell stories about. We only tell stories that we can connect to facts and history about the people involved,” says Humble. She calls herself a converted skeptic because of what she has witnessed during the ghost tours.