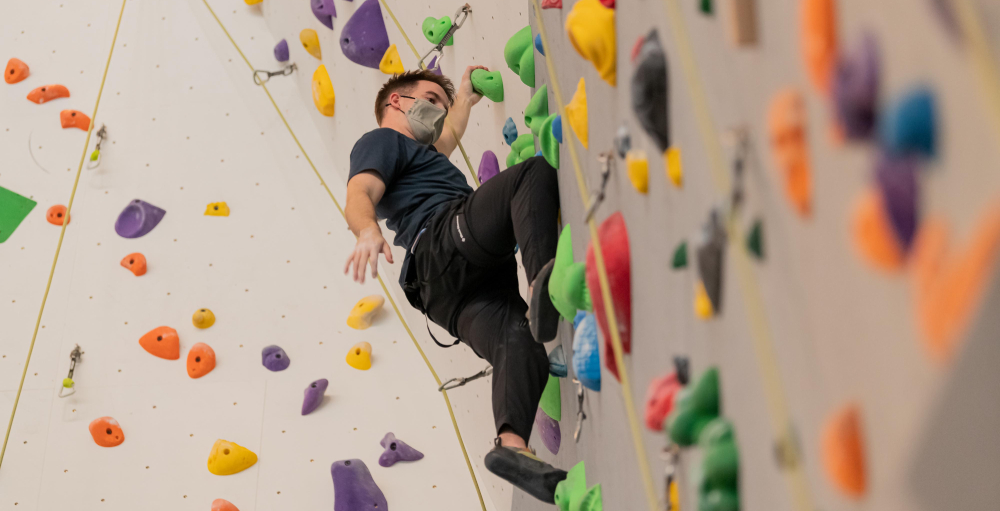 Once a venue of the 2010 Vancouver Winter Olympic Games, the Richmond Olympic Oval is a local institution and community pillar.

Today, the multi-sport and fitness facility has become a go-to spot for climbers with the creation of its new indoor climbing wall, which also happens to be the tallest wall in the Lower Mainland.

While the colossal, state-of-the-art facility is a feat all on its own, it also attracts an impressive number of athletes from around the world — including Team Canada.

The Oval team recently invited us to check out the one-of-a-kind space to see what it’s all about. So, naturally, we volunteered our Digital Marketing Coordinator (and all-around good sport), Parker Kump, to test it out.

To raise the stakes, we challenged him to train like an Olympian in all three disciplines of climbing — and take to the climbing wall to beat the six-second pro record. Easy, right? Not quite. 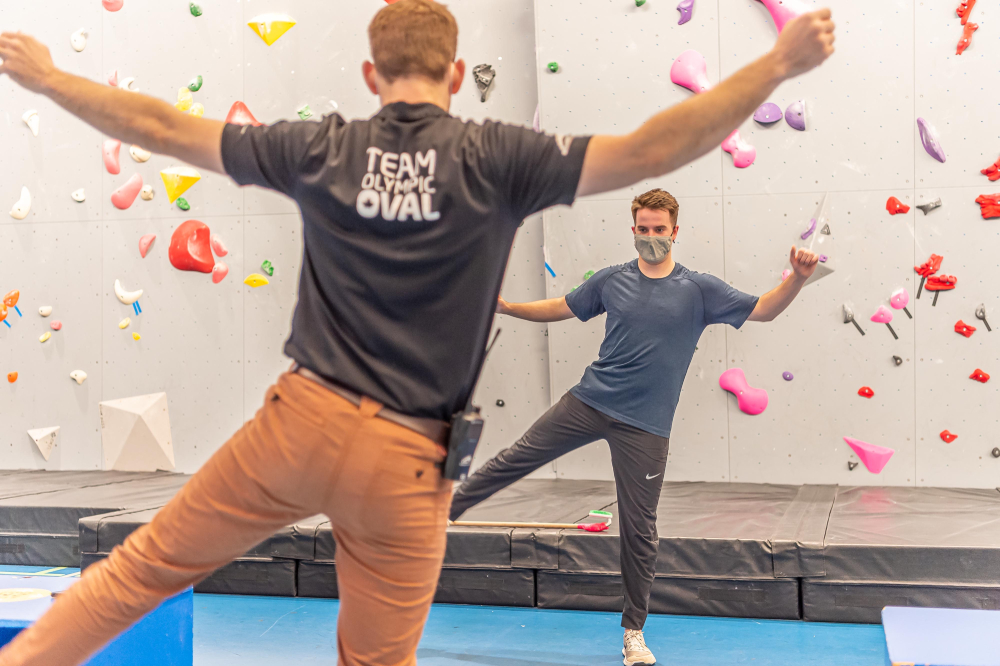 The first (of many) things our convoy discovered on his athletic journey is that the wall was erected to provide athletes with the resources to train for the 2020 Tokyo Summer Olympic Games, where climbing will be making its Olympic debut.

“There are three competitions that they do in the Olympics: speed, boulder, and lead,” Kump explains to us. Lucky for him, he got a one-on-one tutorial in each.

To give you a sense of scope, the Oval’s climbing wall is the tallest in the region, measuring in at 17 meters. While it might sound daunting, the wall was built for all climbing levels — from novice to elite.

The facility also has the only 15-metre speed climbing wall in the Lower Mainland, which boasts fully adjustable training and bouldering walls.

How did our rookie rock climber fair on his first attempt, you might be wondering? After starting off the day with a run on the treadmill and a series of stretches in preparation, he was ready to scale the speed wall. 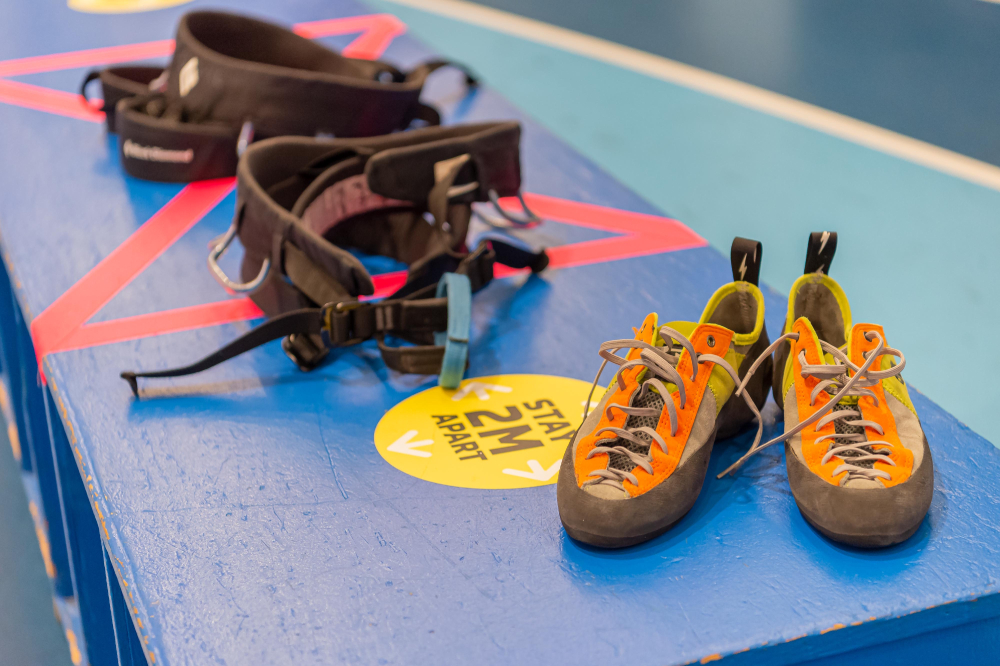 “The first time I did it, it took me a minute and a half. By the end of the session, I got it down to 25 seconds,” he says. Not quite on par with Team Canada’s six-second standard, but surely not too bad for a first-timer.

The big jump in progress, too, seems to be a testament to the skilled climbing coaches at the Oval. 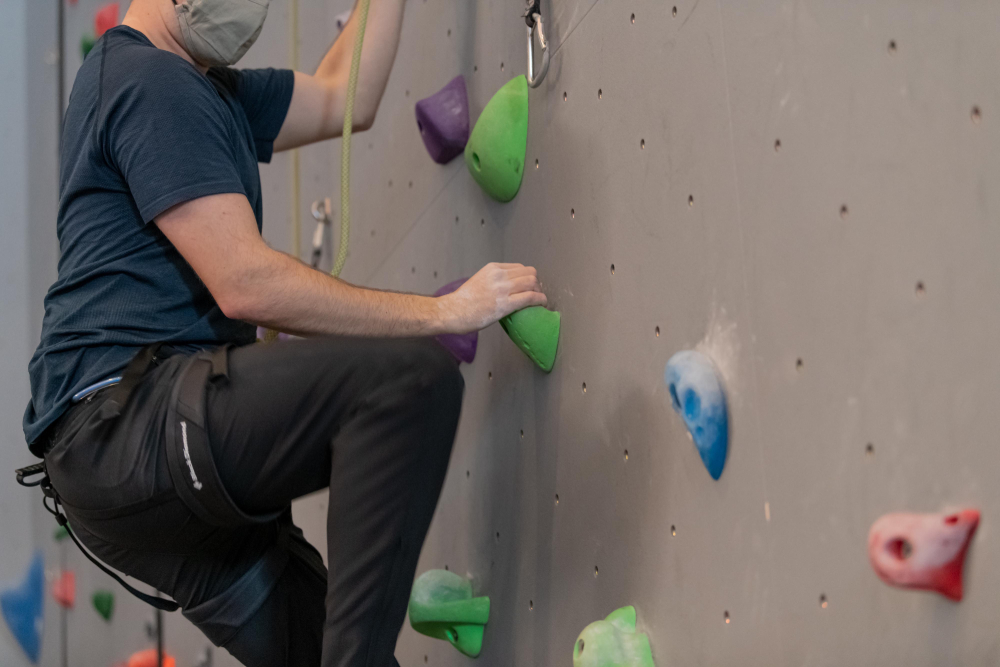 While the speed portion was, inherently, about scaling the wall as fast as possible, Kump’s attempt at the boulder portion proved to be more about strategy.

“This style involves strategy and technique,” says Kump. Here, the wall gives way to a prism of colours that each indicate a particular path’s level of difficulty. New routes are set weekly to change things up, with a total of 40 routes ranging from novice to pro.

With this, his training coach offered a helpful (and surprisingly poetic) analogy. “He said, it’s artistic. The wall is the canvas, the boulder is the paint, and you’re the brush,” he relays.

The final athletic endeavour of the day, the lead wall, was the most challenging — it’s the one the Olympians train on, and ends in a 10-metre ascent at a staggering 40-degree angle.

While he didn’t make it to the top of the lead wall, Kump was able to simulate the same experience on the training wall, which can be lowered to a 45-degree angle to replicate the hardest part of the lead wall (or other challenging routes in the Oval).

Despite, at this point, feeling that his arms were made of spaghetti, our novice climber managed to hold himself up twice — at an overhang over the padded floor. 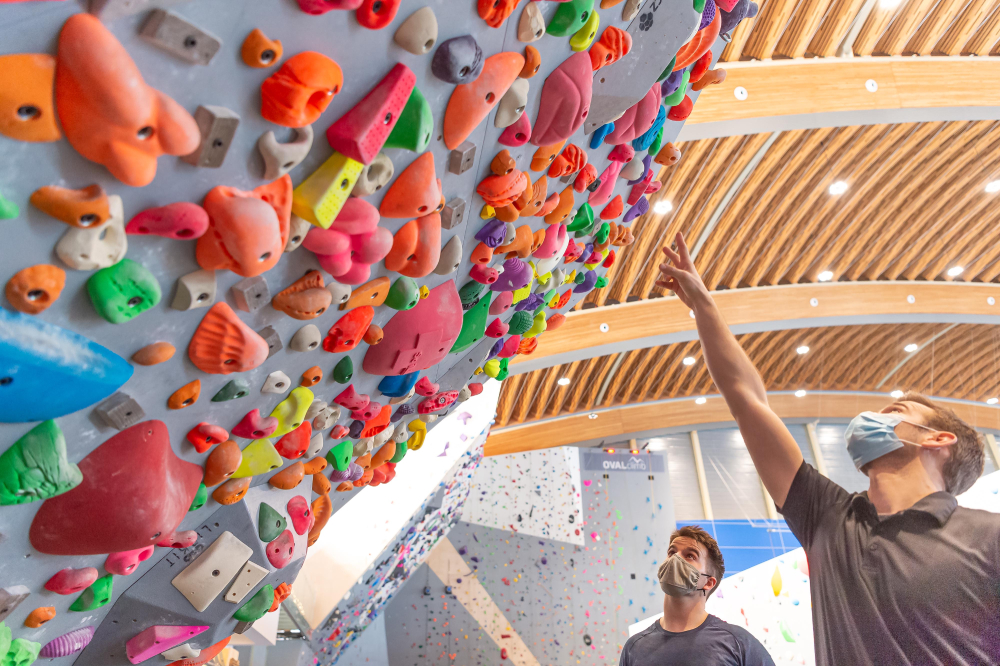 If your interest has been piqued and you’d like a first-hand try at climbing, the Richmond Olympic Oval offers a variety of climbing programs for everyone (five years and up). Their lineup is wide-ranging and includes everything from the basics to developing climbing techniques for all levels.

Climbing programs, like Learn to Belay, will take you through rope safety and lowering, while the Youth Climbing Programs focus on introducing young climbers to the sport’s fundamentals.

The facility and team have also gone to great lengths to ensure the safety of climbers and visitors amid the ongoing pandemic and have a strict set of safety precautions in place, including having visitors bring their own indoor shoes, sanitization practices, and social distancing measures. 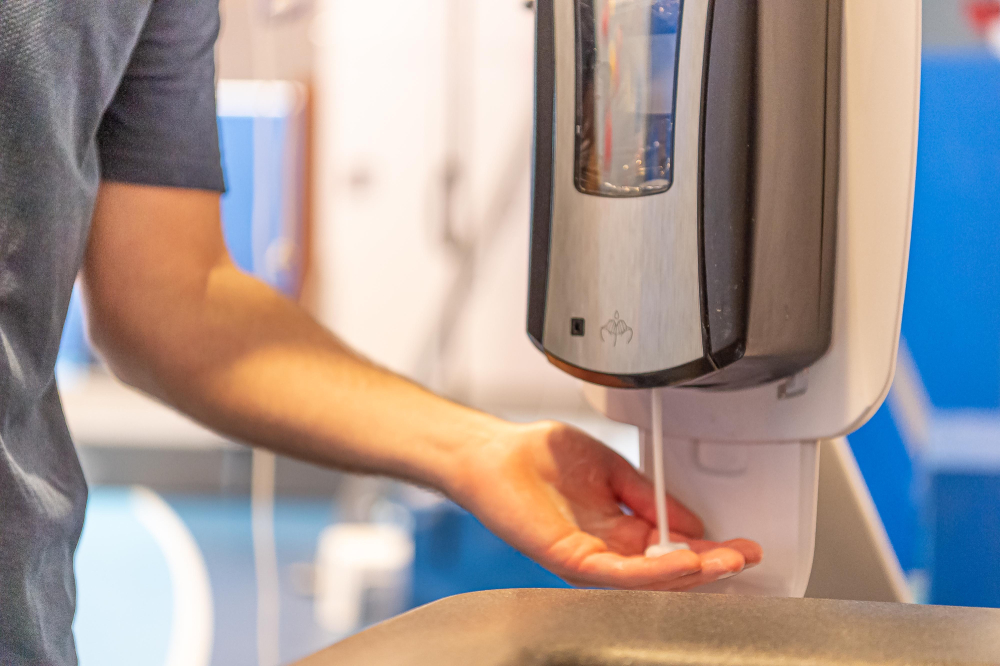 All in all, though the day gave rise to many new skills and lessons, perhaps the biggest revelation was the extent to which climbing is a team effort. It’s a sport that generates friendships and that thrives on the support you get from your coaches and teammates.

“It’s a really cool atmosphere,” says Kump — who is already looking forward to his next climbing adventure.

Any final thoughts? “My arms are still sore,” he says.

Try the climb this season by heading to RichmondOval.ca to book a class or drop-in session.