Each year in early October, schools across British Columbia and beyond participate in an international week dedicated to walking and wheeling to school. Walk and Wheel to School Week is currently underway, running from October 5 to 9, with the result being an increased number of students choosing active travel to get to class in the mornings.

Since our eldest entered kindergarten in 2011, she has participated in Laura Secord Elementary’s annual celebration of the event. As parents, we have helped organize the week’s activities in the past, including participation in the international Beat the Street Competition in 2012, when Secord won with the most students walking or wheeling, competing with 13 other schools worldwide. 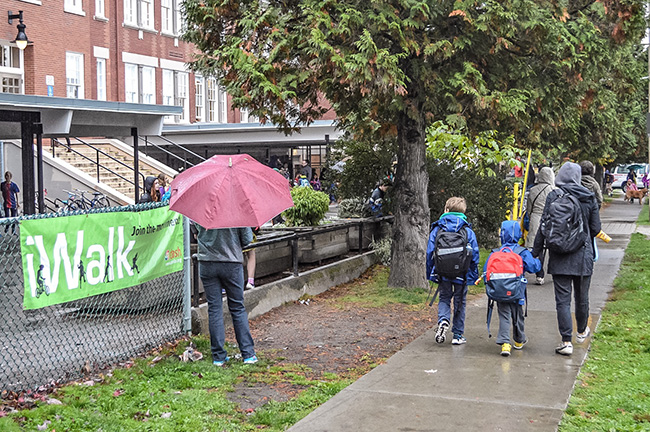 As an East Vancouver school, set along two major bikeways and in a highly walkable community, it’s no surprise that many families choose to leave the car at home when travelling to and from school. Or at least while the weather is nice, which is one of the reasons DashBC, the provincial organizers of Walk and Wheel to School plan the event for the fall.

Despite best efforts, however, in our experience, we notice a significant increase in car traffic once the weather becomes cold and wet. While recognizing some families don’t have the luxury of living less than a kilometre away from the school as we do, it does not change the fact that an influx of cars out front of the school is a safety concern for the school community.

It is this very concern, as well as some vehicle collisions on highly travelled routes that encouraged Secord’s PAC and administration to partner with HASTeBC to address the transportation concerns and develop a School Travel Plan.

Charlotte Watson, Secord’s HASTeBC coordinator, explains. “School Travel Planning aims to decrease the number of car trips and increase the number of children walking and wheeling to and from school. This results in improved safety health and fitness of the students, reduced congestion, a more positive environmental impact, and cost savings.”

Not to mention, as a result of good planning, principals also spend less of their already stretched schedules dealing with parent concerns about traffic and safety. 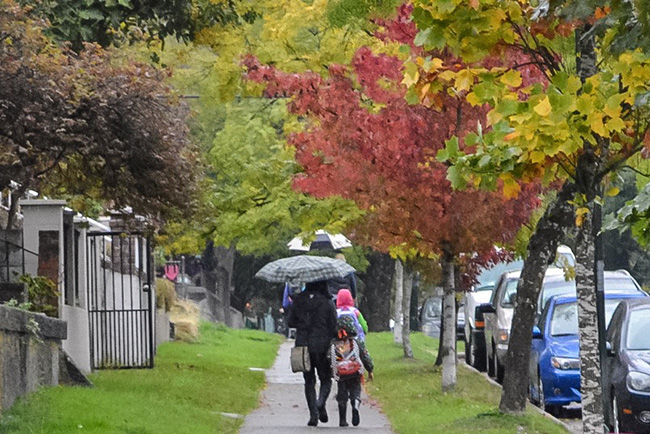 On Wednesday, October 7, Laura Secord Elementary joined schools around the world for international Walk and Wheel to School Day. Despite the rain, students still made a concerted effort to walk or wheel. As incentive, along with offering a prize for the primary and intermediate classes with the highest number of students using active transportation, bonus points were given to those who they wore their spirit colours. Needless to say, it was a good way to boost numbers, even on a wet day.

As cooler, wet weather becomes more common in the coming weeks, it is very likely walking, cycling and scooting numbers will begin to dwindle. By encouraging the students themselves to make the choice this week, hopefully habits have begun to be formed. Working with HASTeBC in the coming months will help, as they combine efforts with school staff, the PAC and students themselves to create a long term plan that will keep our kids making healthy, active choices, and make the trip to school safer for everyone.