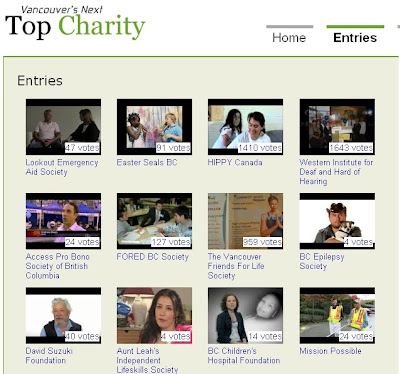 The great thing about social media is that it creates awareness on stuff that for the most part goes under the radar. Vancouver’s Next Top Charity is taking that a step further and wants you to vote in a video contest to help promote the under-promoted non-profits in our city. Neat idea!

The special 4 week event runs until June 18th. 12 charities and non-profit organizations from Vancouver are pitching their respective organizations in the online video competition called Vancouver’s Next Top Charity. The organization with the most votes after 4 weeks will be crowned Vancouver’s Top Charity 2010.
This event was created to help revitalize the communities around the causes and help these organizations overcome the hardships they experienced in the recent economic downturn.
The hope is that the videos will connect Vancouverites closer to the issues around them, inspire them to be part of the solution, and encourage them to invite the support of others (something we’ve made very easy with our special voting system).

So go out and vote Vancouver!

Details for Vancouver’s Next Top Charity

Date: May 24 2010 to Jun 18 2010
Link: http://spotteddoing.com/topcharity
Fund Raising: An online Charity Auction (and later, a donation system) will generate some prize money for the winning charity.
VancityBuzz.com