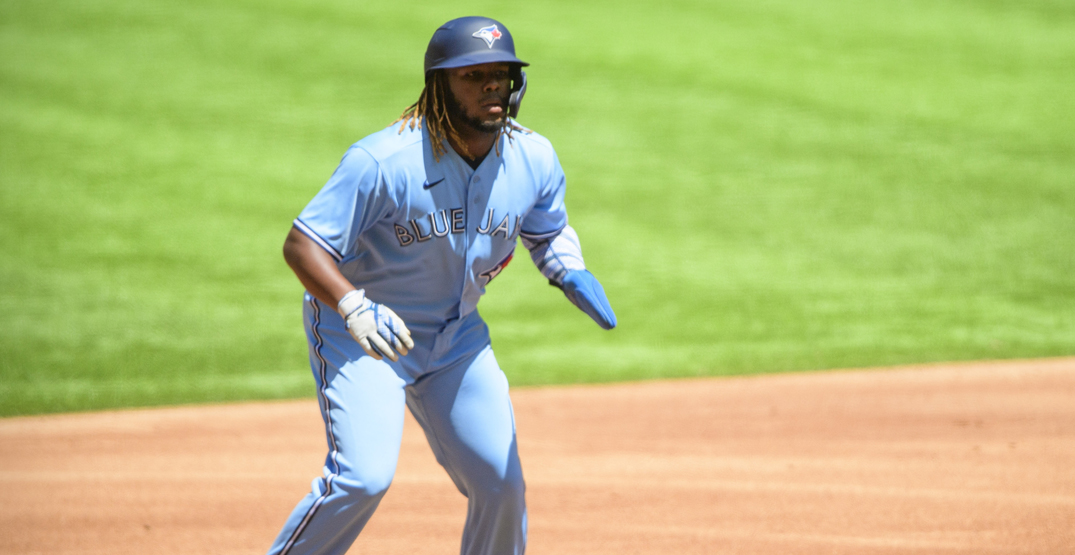 The most driven athletes find ways to make themselves better. Even when it seems like they’ve hit their ceiling, they strive to become better at their craft.

Case in point: one of baseball’s best players Mike Trout saying he had a “bad year” in 2020, despite finishing top five in the AL MVP voting and posting typical eye-popping Trout-ian numbers with the Angels.

At 22 years old, Vladimir Guerrero Jr. hasn’t even reached his maximum potential yet, but he’s elevated his game to a whole new level in 2021. In just a handful of games with the Blue Jays this year, he already looks like a new man in the field.

Guerrero Jr.’s official breakout has been a long time coming, traced back to his universally hyped MLB debut in April 2019. Two years isn’t a very long time in the lifespan of a professional baseball player, but it somehow feels like a lifetime when all of baseball has been waiting for him to breakout.

The baseball player making acrobatic stretches at first base, leaping catches, hammering baseballs to the opposite field, and spitting on borderline pitches is not the player who suited up for the Blue Jays in 2019.

This iteration of Guerrero Jr. is far more dangerous; combining his unparalleled plate discipline with his signature power stroke has made him one of the most feared hitters in baseball during the early part of the 2021 season.

For one, his .521 on base percentage ranks fifth in baseball (sandwiched in between Byron Buxton and Yuli Gurriel), he’s reached base in all 10 of his games this season, and as per usual, Vladdy’s maximum exit velocity off the bat ranks sixth in baseball.

The power has always been there, as demonstrated by his 15 home runs in his debut season and nine home runs in 2020, but Guerrero Jr.’s fatal flaw the last year was his propensity to hammer the ball into the ground.

So far this season, he’s hammering the ball with authority and lifting the ball in the air, where he does the bulk of his damage. Year over year, Guerrero Jr. increased his launch angle from 4.6 degrees to 10.7 degrees.

He also cut his ground ball rate from 54.6% last season to 46.4 percent this year. And one of the most impressive parts about this stretch is he’s hit the bulk of his balls in play to the opposite field, a true sign of a talented hitter.

During last night’s contest against the Yankees, he seemed to make a casual swing at a pitch on the outer half of the plate, but drove this ball to the right-centre field wall for a double.

Vladdy is hitting EVERYTHING! pic.twitter.com/ybzS12Al9p

He’s always had a stellar eye at the plate, as Guerrero Jr. consistently walked more than he struck out in the minor leagues. This year, his walks and strikeouts are neck-and-neck (eight a piece), a ratio that’s more in line with the prolific numbers he posted in the minor leagues, as opposed to his last two years in the big leagues.

Aside from his offensive improvements, Guerrero Jr. clearly put in the work to make himself a better defensive player in 2021 and a better baserunner. Again, he looks like a drastically different Blue Jay in the field this year.

According to Mike Petriello of MLB.com, no player has increased their sprint speed year-over-year than Guerrero Jr. He’s increased his foot speed by nearly two feet per second on the base paths.

No player in MLB has improved their sprint speed year-over-year more than Vladdy! pic.twitter.com/0K6fFwx8ie

But most impressive of all has been his defensive transformation at first base. This is someone who showed up to summer camp last year and was put into a new position off the jump. He basically had to learn the position on the job last year, and the results reflected that.

Shortstops and third baseman often make the “sexy” plays in the field, but first base is a thankless position on the diamond. Good first baseman make the job look easy, but an unseasoned fielder will reveal themselves quickly, as Guerrero Jr. did last season.

Fast forward one year, and now he’s making acrobatic stretches at first base, leaping catches into the air and stealing outs at first base when he arguably cost the team outs first base last year.

The final play of last night’s Blue Jays win sealed the deal with this impressive stretch by Guerrero Jr.

Blue Jays GM Ross Atkins said in the pre-season that the team hopes Guerrero Jr. can play Gold Glove-calibre defence at first base this season. As outlandish as that statement sounded at the time, Vladdy’s held up his end of the bargain so far.

Last season, his inexperience at first base was abundantly clear, but this year, aside from a few minor mistakes from Opening Weekend, Guerrero Jr. is playing the position with veteran savvy.

A few people have mentioned this, but this is not unlike what happened with Edwin Encarnacion when he transitioned across the diamond from third base to first base with the Blue Jays in 2012.

He struggled for years at the hot corner before the Blue Jays finally gave Encarnacion the bulk of his games at first base. Maybe it was the lessened pressure of playing a different position, but for whatever reason, it worked.

Encarnacion posted a career year at the plate in 2012, posting an eye-popping 42 home runs, while playing the bulk of his games in the field at first base. He held his own at the position, and for the next three years, the Dominican native unlocked his potential on both sides of the baseball.

Encarnacion’s offensive breakout was eight years in the making at the big leagues, but Guerrero Jr. may have figured it out playing in his third MLB season at the young age of only 22.

10 games is a small sample size, but there’s reason to believe Guerrero Jr.’s transformation at the plate, on the base paths, and at first base is legitimate. And if that’s the case, the rest of the American League ought to take notice, because Guerrero Jr. will be an enormous problem for them in the future.