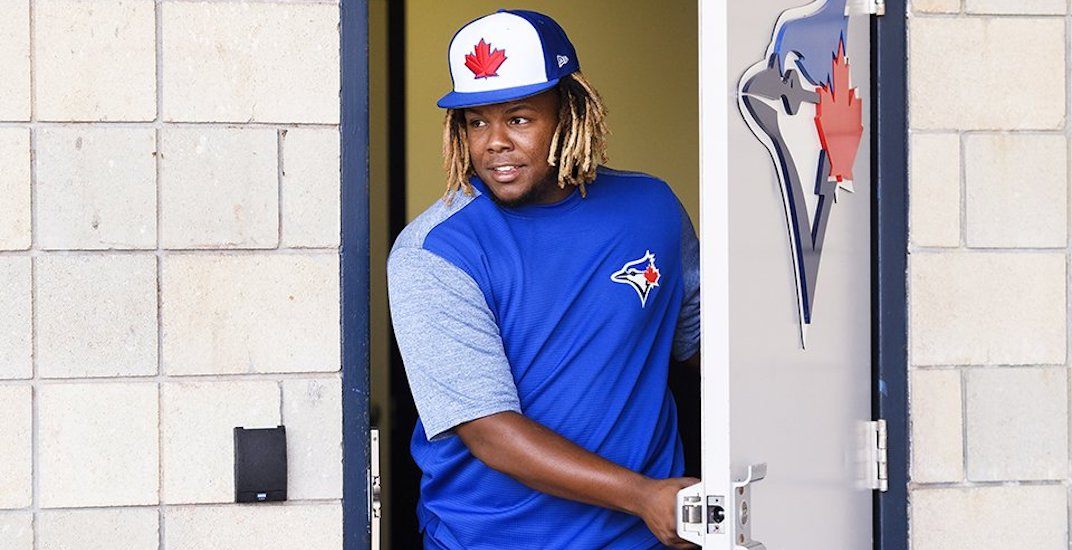 Next Saturday, March 16th, Vladimir Guerrero Jr. celebrates his 20th birthday. At some point this year, the Toronto Blue Jays’ most promising prospect will make his Major League debut.

His arrival date has been hotly debated, but one thing that isn’t debatable is his size. Guerrero is a big, big boy. “Thicc,” as the kids say.

Not only was this evident over the weekend when he saw action during televised Spring Training games, but the Blue Jays updated Vlad’s profile page to include his most up to date measurements.

He’s 6-foot-2 and 250 pounds. That’s a far cry from the 6-foot-1 and 200-pound measurement which was listed in February. That’s not to say he put on fifty pounds in a month, but he definitely didn’t arrive at spring training camp as a smaller man compared to last year.

Admittedly, it’s bizarre that the weight and size of a 19-year-old is a topic of discussion, but the fact that he’s so young and still growing could be cause for concern. There have only been a handful of MLB players who were Guerrero’s size at this age.

In fact, if he gets called up this year in his age-20 season, Vladdy would be the youngest player ever at his size to play a position in the big leagues. Courtesy of Baseball Reference, Here’s a list of similar players in his age bracket, weight class, and height.

There has never been a Major League position player at age 20 who weighed 250 pounds or more. This year, Guerrero would become the very first player of that stature.

The closest comparison would be Adam Dunn, who at age 21 with the Cincinnati Reds, tipped the scale at 285 pounds. Mind you, Dunn is a large man at 6-foot-6, so he was a tank.

This man falls into the pitcher category, but at age 20 in his rookie season with the Cleveland Indians, CC Sabathia weighed in at 300 pounds. He’s easily the youngest and largest MLB player overall, with the caveat being he was a starting pitcher.

Again, speaking openly about a teenager’s weight is a weird and strange exercise, but the Blue Jays have a few reasons to be concerned. For one, he’s turning twenty years old next week. Anyone in their late twenties will attest, metabolism does not speed up as time passes. As he grows and fills out, Guerrero could add even more weight to that 250-pound measurement.

Also, with Guerrero playing a premium position such as third base, he should be agile and durable enough to stay on the field for the duration of a full season. One can only wonder whether those large measurements could have an effect on playing third base long term.

I can speak from experience, my weight fluctuated throughout my twenties and surely Guerrero’s will fluctuate as well. The difference being that most people don’t have their measurements readily available on the internet; baseball players do.

Yet, all of this might not even matter. If Guerrero is as good as everybody thinks he’ll be, his weight will be a moot point. So long as he’s hitting one-handed doubles to the wall and tape measure home runs for the Blue Jays, nobody will care about that large body of his.