Vixens of Wonderland by Concrete Vertigo Productions is going for sexy, bawdily comedic burlesque pop revue. Unfortunately, it falls short of both. A smattering of talent within the ensemble cast can’t help that the musical numbers lack polish, and the performers are left, with increasing nakedness, to heft the burden of an un-dramaturged and underprepared spectacle – a task to which most of them are unequal.

Written by Mike Kovac and set in some sort of nebulously defined, vaguely steampunk fantasy world, apparently loosely based on Lewis Carroll’s Alice books, Vixens is nevertheless inexplicably littered with anachronistic pop culture references that attempt to pass, failingly, for jokes. Indeed, Vixens hopes that the audience will reward reference without ever telling a single joke, and on the night of my viewing, this tactic succeeded to some degree, but I suspect this is largely by proxy of the risk involved with the public baring of flesh – and because in the show’s opening, the three-woman Greek chorus of Kayla Heyblom, Jennifer Long and Ranae Miller (Greek chorus?! Wearing togas? In Steampunk Wonderland?!) literally solicits the audience to exchange applause for nudity throughout the ensuing performance.

The fact that the plot of a burlesque theatre revue should be a weak thread meant only to connect titillating striptease renditions of pop songs is not a problem in and of itself – those who enjoy a good burlesque revue have really come for the stripping and singing. Vixens, however, has an inflated focus on a story that doesn’t make sense or contain believable characters.

Alan Pronger and Ranae Miller in Vixens of Wonderland. Photo by Gaelan Beatty.

Alice (Emily Kapahi) is a buxom adult who has just gotten off a train, or something, to Wonderland, presumably from a place just as bizarre since she hardly bats an eyelash at all the sexually charged, outré behaviour. She bumps into a man named White Rabbit (Ryan Bolton), and the Red King finds out (Sean Parsons), and for some reason he hates outsiders who are different, despite the fact that everyone we meet in Wonderland is a weird misfit, so by what metric he has judged Alice to be different is unclear. Anyway, the Red King wants to capture and behead Alice because that’s what Red monarchs do in Wonderland, so Alice and Rabbit are running from his guards through Wonderland, maybe, but also Rabbit has lost his gloves or something and Eat Me and Drink Me are psychedelic drugs and Alice trips out, because Lewis Carroll.

And then there’s the matter of the striptease. Director Dawn Ewen’s choreography is light on the “tease.” Burlesque is coy, even more about what you don’t see and can’t touch than what is actually revealed. Vixens’ numbers are energetic and presentational, sometimes creative and nearly fun – but lacking mystery. It’s broad and it’s all out there, not keeping any sexy secrets, and unfortunately, it doesn’t appear to be particularly well-rehearsed; some moves miss, some costumes come apart accidentally instead of coming off sexily, some formations are lopsided, etc. And the karaoke tracks are too loud. There are certainly capable singers among the cast, but they often can’t compete with the speakers. 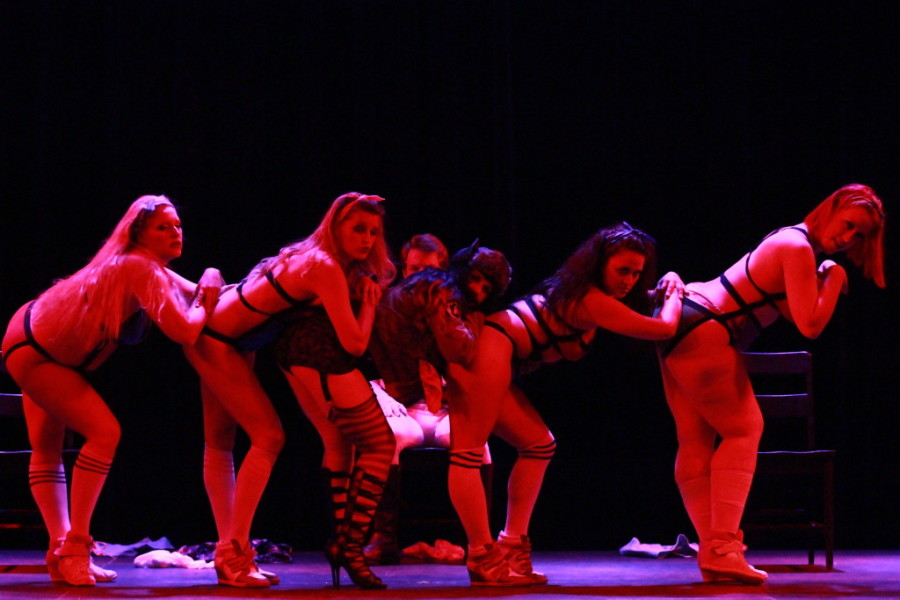 The girls get some stage time in Vixens of Wonderland burlesque revue. Photo by Gaelan Beatty.

Women are underrepresented as objects of desire – so much so that partway through the first half, the Greek chorus proclaims that they haven’t forgotten about the “titties.” So of course, the next number is a sultry all-women piece a-la Cell Block Tango, right? Wrong. It’s a gay duet by military lovers Tweedle Dum and Tweedle Dee. (I guess we’ve joined this parallel reality that is full of current pop culture references around or before 2011, when the end of legal discrimination against gays in the military was relevant.) Well, the next group number will be all cheesecake, then. Nope! There are six women on the stage, but this number is led by the Red King, and all those women stand in the back to support him and three male performers in wrestling singlets who take front and centre.

Not until after an S&M whipping scene of the Tweedles (now also in singlets and discovering partway through that, hey, this is fun…not a very fresh joke) does an all female number occur, and this is a take on the Wonderland flower garden scene that has the bullying flowers reciting memorable lines from Mean Girls as, once again, reference stands in for wit. 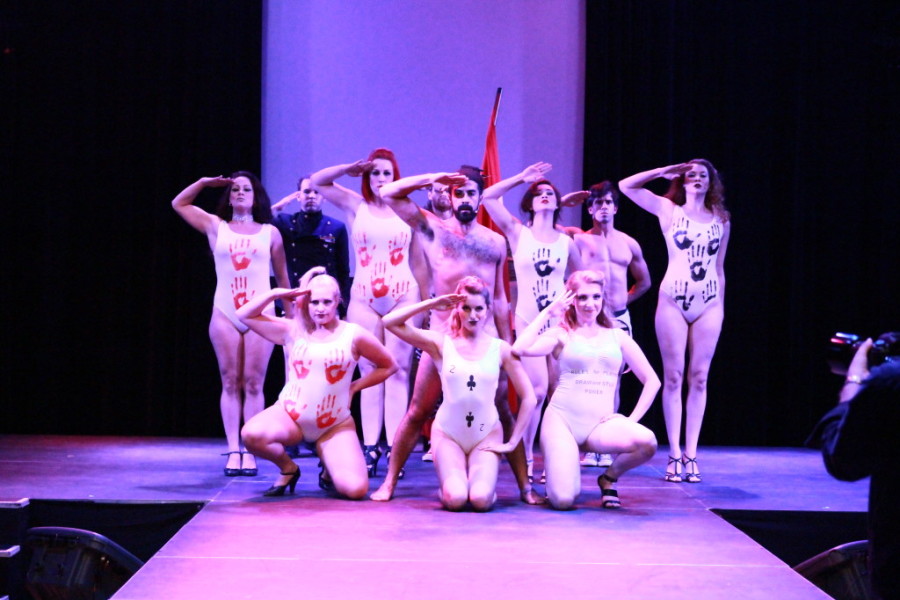 Strong soloists in a weak ensemble

Most of the actors are missing two, or all three, of the threats required for a “triple threat” show. A few numbers are simply cringeworthy, including the strained opener of Ozzy Osbourne’s Crazy Train which is torturously beyond Mike Kovac’s vocal ability (the writer of Vixens, who plays a lackey to the Red King). A few of the performers seem reasonably capable, like they might shine in a better show. The Greek chorus of Heyblom, Long and Miller provide vocal support when soloists need backup. Emily Kapahi has the right pluck as new-girl-in-town Alice. Toward the end of the first half, we’re introduced to Jacqueline Breakwell as the Cheshire Cat, and she really knows what she’s doing. Her physical comedy is brilliant and her singing strong, and she easily transcends her castmates and the weak material as a standout performer. But she’s brought in too late to resuscitate Vixens. By this time, it’s been an hour that felt like two.

Concrete Vertigo has heard these criticisms before: do some dramaturgy, workshop more, and  trim the excess (for goodness’ sake, nobody needs a two-act burlesque revue). Will following this advice mean they’ll make great theatre? No, there is little evidence that a show like Vixens could be redeemed to that degree. But it might become entertaining.

Some of the audience had started the show with full bottles of wine on their table. The chorus promises just before intermission that a few drinks will make the rest of the show much better. Maybe I would have had a nice time if I’d followed that advice, but I was driving, so I decided it was safer to leave before act two.

Disclosure: This review only covers the first half of the show.