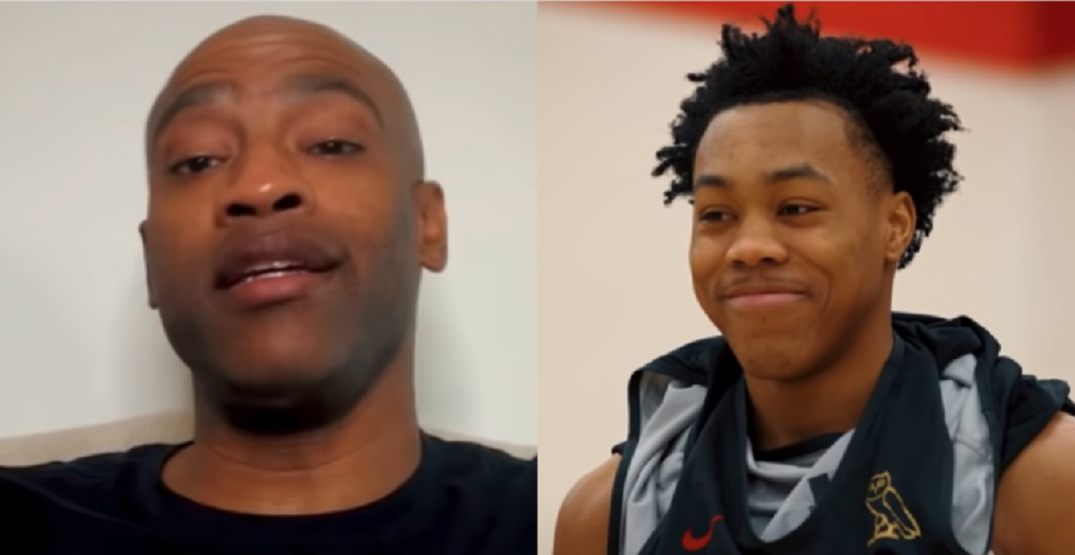 Who else but Vince Carter to present Toronto Raptors youngster Scottie Barnes with his NBA Rookie of the Year Award?

At practice before their Game 4 matchup against the Philadelphia 76ers, the Raptors wheeled in a television set to play a message from the former Raptors star, who played for the team from 1997-2004.

Carter’s relationship with the Raptors strained over his final years, but it’s seemed to heal in recent times, evidenced by the team trusting him to deliver an important message.

“I know you’re busy, and locked in for the game. I get it,” Carter said after appearing on the screen. “But I just wanted to say I truly enjoyed watching you play this year. It takes me back to when I was a rookie and I was able to win the 1998 Rookie of the Year Award trophy.

The presence of Carter made Barnes and his Raptors teammates perk up, as they seemed to realize the inevitability of the rest of the message.

“Great memories man, great memories. I wanted to give you some quick Raptors history if I could, since we’re on the subject,” Carter added. “Did you know it’s only been three Raptors players in history to win this award? Damon Stoudamire. Me. And a 6-foot-7 rookie from West Palm Beach Florida, my fellow forward, Scottie Barnes.”

The team then mobbed Barnes in celebration.

“That was pretty cool. It was a good moment to share as a team,” Nurse told reporters on Saturday after Toronto’s win to close the series gap to 3-1. “Being down 3-0, there wasn’t a lot of great moments, so that was a good boost.”

Barnes edged out Cleveland’s Evan Mobley in the closest ballot for the award under the current voting format.

The 15-point difference between the NBA Rookie of the Year winner (Scottie Barnes) and the second-place finisher (Evan Mobley) is the smallest margin since the current voting format began 19 years ago.

“I was just super happy, of course,” Barnes said on Saturday. They took forever to announce the award. I was wondering what Vince was talking about, he was just going on.”

Barnes was presented with the award officially on Saturday from Raptors president Masai Ujiri.

Scottie Barnes officially gets his Rookie of the Year award from #Raptors prez Masai Ujiri: pic.twitter.com/8XYefBUS0f

Carter added that he’s excited for the rest of Barnes’ career past this season.

“Congratulations man, looking forward to seeing you achieve success in the NBA,” Carter concluded his message. “You up next.”