What wines work well with Indian food? Considering it’s not at all in the cuisine’s tradition to serve the nation’s many flavourful, savoury, deeply-spiced food with wine, contemporary sommeliers, chefs, and home cooks have found themselves in a vast and unchartered culinary territory–or terroir, to use the language of wine.

For Vancouver’s Indian food guru, acclaimed chef and restaurateur Vikram Vij, wine with Indian food is kind of a no-brainer. He does it. You should do it. And it should be easy and delicious.

Classically speaking, the way Vij tells it, the way alcohol made its way to the table for Indians was in the form of a few belts of scotch, consumed before mealtime. “[They] got a little buzz going, stumbled to the table, ate food, and went to sleep,” he says, laughing.

Truth be told, while we commonly think of beer as the perfect thirst quencher with Indian food, Vij says the more ideal practice is to pare your beverage option significantly back. “If you really want to taste Indian food and the nuances of it, you should taste water with it. But because we live in North America, we love our wine and our beer.”

A love of wine is deep-rooted for Vij, who has always enjoyed wine with food. Or, well, wine. Period. “Wine for me is a beautiful grape juice that goes well with your food,” he explains. “I don’t see wine as alcohol at all; maybe that’s why I consume copious amounts of it,” he jokes.

Legend has it drinking wine is practically compulsory when he’s in his home kitchen. “I cannot cook without a glass of wine–unless I’m cooking in the daytime with my staff,” he adds. Most recently, as he tells it, he came home late one night and headed to the kitchen with the thought in mind to make some food, uncorked an “extremely delicious” and well-priced “easy drinking” 50th Parallel Winery pinot, enjoyed a couple of glasses with some salted almonds…and skipped the cooking altogether. 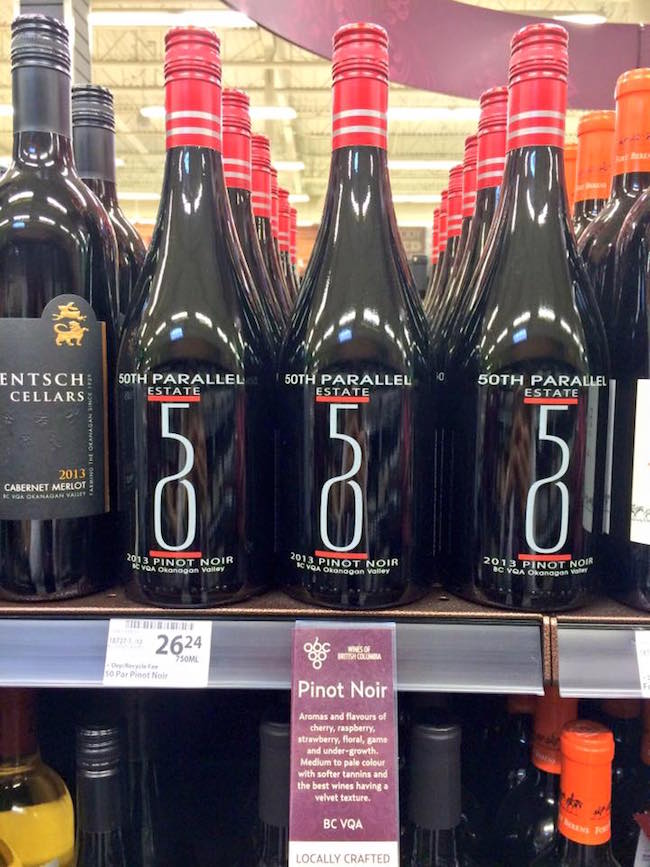 “Extremely delicious,” is basically a hallmark for Vij when it comes to giving his nod of approval to a wine. Vij says he first refined his knowledge of and palate for wine when he worked at Vancouver’s legendary Raincity Grill, and had to fully understand the restaurant’s ground-breaking menu of 50 Pacific Northwest wines by-the-glass.

When Vij moved on to open his own eponymous restaurant, he brought with him to his new endeavour a firm philosophy about what Vij’s wine program should be.

“When I first opened [Vij’s] up, I believed that indian food that should work well with local wines that were available,” he notes. So he created a small wine list of five whites and five reds. “I wanted to showcase the cuisine, separately, but also show the seriousness [of the restaurant],” Vij explains, adding that he knew that if his clientele were to take the restaurant seriously, they would have to see that someone knowledgable was putting together the wine list.

In 2014, Vij ventured south of the Fraser to open My Shanti, bringing with him not only an enduring reputation as a serious restaurateur, but also a desire to further offer regional wines with the restaurant’s modern take on Indian food.

Indian food for the modern eater

What Vij has done with the food at My Shanti has drawn fresh crowds to the southern end of Surrey, and given critics and foodies a reason to make the trek down Highway 99 and King George Boulevard. This is Vij’s solo operation, culinarily speaking, and his meld of modern sophistication, European technique, and the rich food history of India results in an exciting menu of familiar fare with exciting local and contemporary twists.

For example, on the menu of regionally-specific dishes, an opening course like the North Indian Gol gappa turns the expected (for those who have already experienced eating panipuri, which consists of a hollow, fried puri filled with flavoured water, tamarind chutney, potato, chickpeas, and spices) ever so slightly on its side. At My Shanti, the Gol gappa is still a fried, hollow puri filled with spiced lentils and potatoes, but it appears at the table perched atop a shooter of mint and tamarind water. Suddenly the meal is interactive. If you’re lucky to be dining on a night when Vij is in the house, he may even cheer you on as you try out his Gol gappa. 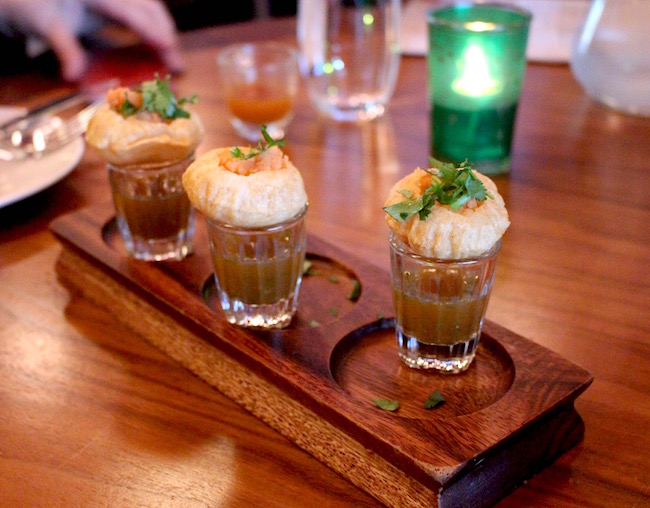 Other twists on tradition on Vij’s My Shanti menu include his use of duck in his biryani–a firm break from the standard protein options. For his lamb stew, he builds on the classical preparation by finishing the dish off with a dash of cream, fresh fenugreek, and cilantro. “It’s something you’d never do in Indian cooking,” Vij explains of the French technique of “finishing off” a dish. But doing so lends the dish a “lighter style and colour,” he says, and “perks it up a little bit.”

Vij’s poetic license with Indian cuisine, along with My Shanti’s vibrant and welcoming atmosphere, is largely why the restaurant has won some high-profile Vancouver-based awards, giving further credence to the possibility of excellent dining outside the city limits.

All of this food can be enjoyed with water, as Vij may cheekily suggest, but My Shanti also has a house beer, a full bar and seasonal cocktail menu, and, of course, terrific local wines.

“The goal of serving Indian food with local wines or wines, period, has always been a passion of mine,” adds Vij.

Don’t be surprised if you run into Vij roaming the aisles at Vancouver’s Cambie Street BC Liquor Store, where he says he often goes to peruse the labels and sees what’s new. He’s also a fan of heading straight to BC’s wine-making regions and getting to know the winemakers and tasting their offerings. “We do truly have one of the most beautiful climates” for wines, he attests.

This wine of mine

What does he look for in a wine, particularly a wine he’d like to be pouring for guests at My Shanti?

“New world wines to me always appeal far more,  beacue the cuisine[at My Shanti] is also so new world and modern. Even though the cuisne has the depths and culture behind it, the way we cook the food is a little bit more modern…it’s not mainstream,” Vij describes. “I’m not just looking for a chardonnay, I’m maybe looking for one that is slightly un-oaked,” he adds, noting that an ideal description of a wine might be “it’s funky, it’s different, it’s unique…the way my food is.”

Vij particularly appreciates fruit-forwardness in local wines and how they work with his food. “I love that the Okanagan is peach and apple country, so the soil has got beautiful flavours of peach and apples. The acidity is beautiful, it’s crisp.”

What Vij is also doing at My Shanti is furthering his relationship with BC purveyors, including the region’s many talented winemakers.

“I believe that among the area there are great BC wines that are being produced,” says Vij, voicing a dedication to supporting those winemakers’ efforts. “They have managed to pay homage in respect to the old world, but they’ve created their own nuances the way I have been able to do with my food at My Shanti.” 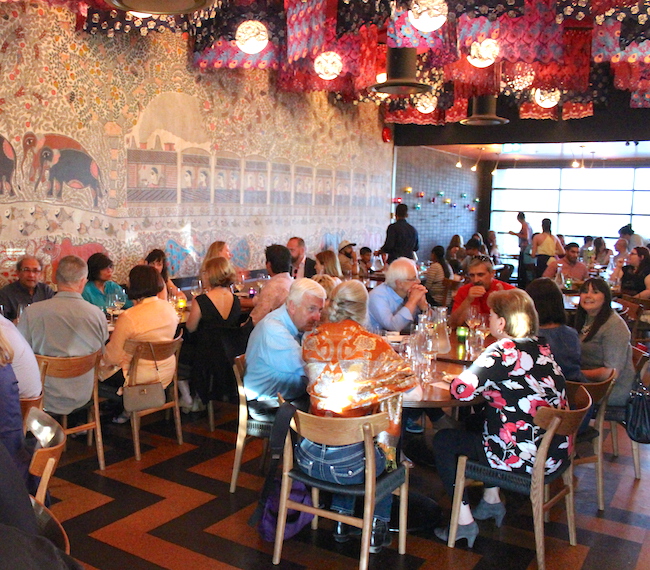 To showcase both of his and the winemakers’ achievements, My Shanti regularly runs Wine Maker’s Dinners, where guests can enjoy a multi-course feast complete with pairings from a select vintner.

For Vij, who has been behind many a wine pairing dinner in his storied career, this is an opportunity to both expand My Shanti’s relationship with BC’s wine innovators, as well as to give customers an enhanced dining experience.

From farm to table, in our own backyards

A firm believer in the unifying power of eating together (“families that share don’t need a shrink,” he jokes), Wine Maker’s Dinners are served family-style. The food comes out piping hot to a large harvest table, and the presentation hasn’t been overly fussed with. “I want people to eat it with their hands, meet the winemaker, have some wine,” says Vij. Each course has its pairing, but the food and glasses all stay on the table, so that guests can mix-and-match pairings at their own leisure.

Vij takes an equally non-academic approach to selecting the wine makers, because what it boils down to is finding wine makers who are pioneering in the industry, many of whom are already familiar with Vij’s food, and they simply “call them up,” and set up a dinner. For Vij, it’s a chance to pay it forward within the industry–a nod to the support he was accorded in his early years on the Vancouver restaurant scene. And in turn, often the wineries leave the dinner with orders for cases of their wine. Everyone wins. 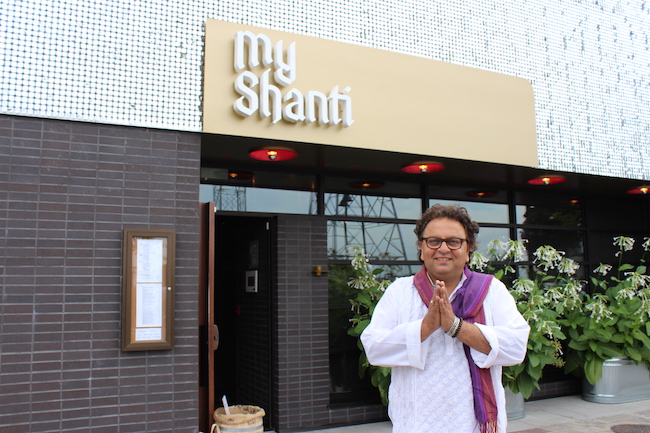 Perhaps the wine dinners at My Shanti can further increase the draw of talented Vancouver chefs opening up restaurants in the Metro region’s many–and highly populated–‘burbs. Getting better food options in the suburbs is something Vij is quite passionate about, as much so as he is about urging locals to know more about the growers, suppliers, and wine makers doing business right where we live–including when we live outside Vancouver proper.

“We as Canadians should be proud of our own backyard, because if we aren’t, nobody else will be.”

“There is no match made in Heaven as far as Indian food and wine are concerned,” says Vij. “What’s correct is you take a sip of your wine it’s tasty, you take a bite of food and it’s tasty.”

“Buy a $20 bottle of wine. Buy a wine that is twist cap. Buy a wine that you can drink lots of, that’s not high in alcohol,” Vij advises. “Most importantly, don’t fuss too much over this ‘perfect pairing.’ Fuss over the food. Serve it with passion, serve it with love, and enjoy. That’s all.”

The next Wine Maker’s Dinner at My Shanti will feature Tantalus Vineyards, and takes place on May 25. For more information, email [email protected]