Over the Labour Day long weekend, a thief allegedly stole camera equipment during a wedding ceremony at Stanley Park. His stunt was captured on video.

Baladie has been released on a promise to appear with the condition that he not visit Stanley Park.

The equipment, worth thousands of dollars, belonged to the wedding’s professional photographer. Not only did he allegedly steal expensive camera equipment in broad daylight, he went off with memory cards holding some of the couple’s wedding memories.

The man captured on video is wearing a striped blue t-shirt, striped shorts, a black baseball cap, and has a black backpack. He is prominently seen in the background within the first 10 seconds of the video and again in the final 10 seconds, when he bends down to steal the camera equipment before briskly walking away with it. 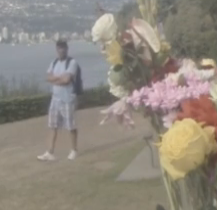 According to Bryan Ball, who posted the video on YouTube:

Video footage of a thief stealing our wedding photographers equipment durring our ceremony. 3:45 – 4pm sept 1st at ferguson point in stanley park Vanouver BC. Check out the guy in the striped shirt black backpack and a ball cap pacing around the left of the screen. in the middle you see him in the center of the screen just behind the brides right shoulder. He stops looks around and then lifts up the pelican case full of cameras and walks off. If you saw this or know the piece of crap human being please leave any info . people would like there memories back.