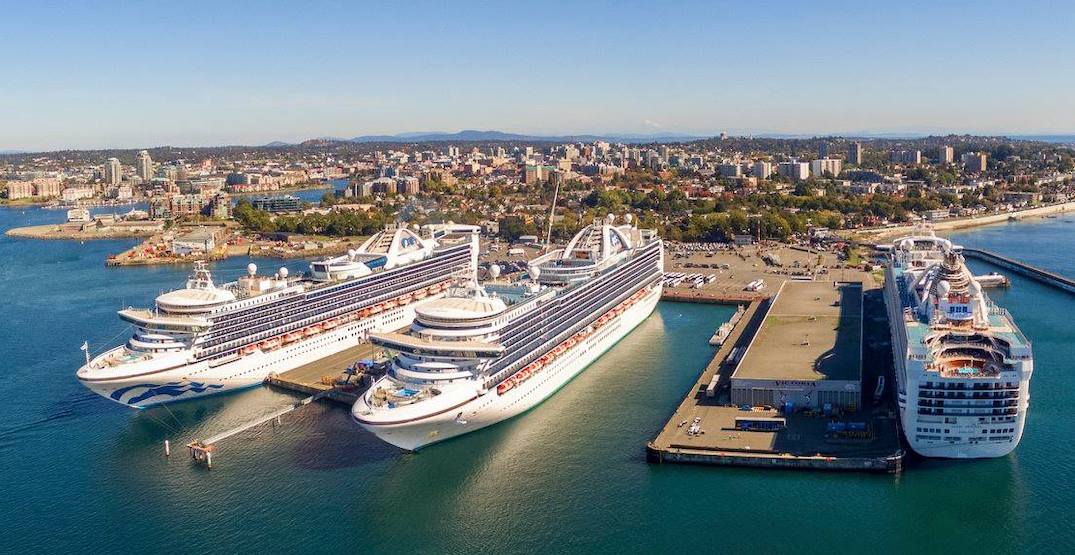 The cruise industry is now expected to make 350 ship calls at the cruise ship terminal in Victoria in 2022, according to the newly released draft schedule by Greater Victoria Harbour Authority (GVHA) for the 2022 cruise ship season.

This is the first seasonal cruise ship season, between March and October, in two years since the onset of the pandemic. The GVHA is currently estimating there will be about 760,000 passengers — nearly the equivalent number of the 2019 season.

Victoria’s first cruise ship visit in 2022 will be made by the Caribbean Princess on April 6, and the season will conclude with the visit of the Crown Princess on November 3.

Of notable mention are the planned visits of the new Norwegian Encore, which made its maiden voyage in late 2019, as well as the 2018-christened Norwegian Bliss, a sister ship.

The 2017-christened Majestic Princess, arriving on May 6 for its first stop this season, will also be the first vessel to use the Pier B mooring dolphin extension that was completed at the cruise ship terminal in early 2020 with the financial support of the federal government. Also marking its inaugural call at Victoria will be the Quantum of the Seas.

The Norwegian Encore, Norwegian Bliss, and Quantum of the Seas are some of the largest cruise ships in the world, and they will each be making stopovers in Victoria on a weekly basis throughout the season starting in early May.

The schedule is subject to change, but there is renewed confidence in the cruise ship industry from the expectation that the pandemic will finally wane in 2022. After 19 months, the federal government rescinded its ban on cruise ships entering Canada on November 1, 2021, providing cruise lines and port authorities with greater certainty and ample lead time to plan for the 2022 season and commence bookings.

“We’ve worked hard and collaborated with government and industry to ensure that when ships return to Canada, and to Victoria, we will be ready to safely welcome passengers and crew,” said Ian Robertson, CEO of GVHA, in a statement.

“I look forward to being on the pier when that first ship arrives, and the first cruise passengers in two years disembark the ship to explore our beautiful city.”

Health safety measures for cruise ships, enforced by Transport Canada and the Public Health Agency of Canada, are expected to include mandatory vaccination requirements for passengers and crew, COVID management plans, and reporting protocols.

On the ground level, port operations will ensure the safe movement of passengers, with the measures meeting both federal and provincial health requirements.

However, the restart of cruise ship operations in BC falls within the shadow of two separate proposed bills in the United States that aim to permanently end the longstanding policy of requiring cruise ships sailing between two American ports to make a stopover at a Canadian port. Instead, proponents of the policy in the states believe cruise ships would make an added stop at an American port instead, keeping the economic benefits within the US.

If the US Passenger Vessel Services Act is amended, it would potentially affect Victoria’s cruise ship business the most, given that the city’s cruise ship activities are almost entirely ship calls — stopovers mid-way in an itinerary, mainly between Seattle and Alaska. Vancouver’s cruise ship business would likely see less of an impact, as its activity is generated primarily from homeport sailings, not stopovers.

Cruise lines also weigh passenger reviews on the allure of the stopover destination, and Victoria has always been considered an attractive inclusion in itineraries given its wide range of unique offerings.

As a case in point, about a decade ago, Disney Cruise Lines briefly relocated the Disney Wonder’s homeport from Vancouver to Seattle for one Alaska cruise season. But this was short lived; after just one season in Seattle, a decision was made to bring back the homeport for the Disney Wonder to Canada Place due to more favourable passenger feedback on visiting Vancouver.

A spokesperson for the Port of Vancouver states they have yet to release their schedule for the 2022 cruise season, but it is expected to be publicized in early 2022.

“As we continue to follow the guidance of Transport Canada, we are planning for the cruise season to resume in 2022. We have been working together with all levels of government, communities, industry, destination and cruise partners to ensure the safe and successful restart of cruise in Vancouver,” reads a statement to Daily Hive Urbanized.

“We are looking forward to welcoming guests back at Canada Place Cruise Terminal beginning in early April 2022.”

Roughly 350,000 hotel-night stays in Vancouver in 2019 were attributed to cruise ship operations. About 120 ships with over 800,000 passengers visit Canada Place each year.

Direct and indirect activities spurred by the cruise industry support about 7,000 jobs and $2.7 billion in total economic impact each year.