When people go to Japanese restaurants, more or less it is always the same thing. The food might be good, but the decor and theme is almost exactly the same as the others; that includes the music. This is where The General Public comes in. Outside, it looks like it could be just another place. Inside though, it is what owner, Randy Lum would call “psychedelic hunting lodge.” With music from different genre and era that you can bop your head to while chowing down and large furry animals watching down in the washroom and greeting people at the front, this is definitely no ordinary Japanese restaurant.

A product of 9 years of planning, The General Public still uses the slogan “Miso ‘Horn’-y,” a reference to the antler-clad head sculptures of some of pop culture’s favourite characters. The restaurant is just as hip and cool as the street where it is located. “There is a market here on Main [Street]. Main is a very cool neighbourhood. It’s a very fashionista, leading edge neighbourhood and I think The General Public really fits in,” says Lum.

Indeed, the restaurant fits in perfectly with the crowd that they cater to. “We just [want] to really be part of the neighbourhood. The neighbourhood has been identified already with hipsters, young families who are hip,” explained Lum. Even the servers, who are also hip, cool, and of course cute, reflect the crowd that they get. They are not the typical servers who would wear all black with an apron tied around their hips. They blend perfectly with their cool, hipster look.

Recently, the Tangoo movement was taken to Main Street, and the crowd from this part of the city were not the only people who came in to join. According to Lum, a lot of people from the West side also venture out towards Main and Commercial, with the two areas being “the coolest.” Another reason why the psychedelic hunting lodge is a perfect fit is because of the affordability of the neighbourhood, which is also reflected on their menu pricing. Lum explained, “We price our items accordingly so that our market here can afford it.”

As a matter of fact, the menu pricing is very reasonable for the quality and dynamic nature of the food. Some of the featured items are the Pyramid Tuna, which is a tuna tartare with chips; a Cucumber Wrap Roll, and The Yoko Roll. The foods are beautifully arranged on bright white plates, which makes it easy to focus on how the items are plated. It is true that we eat with our eyes first, but the sushi rolls and the tempuras are just as good in the mouth as it is on the eyes. 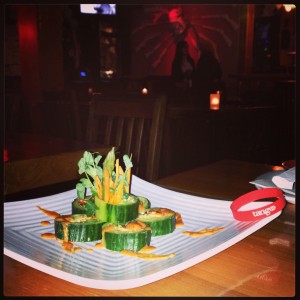 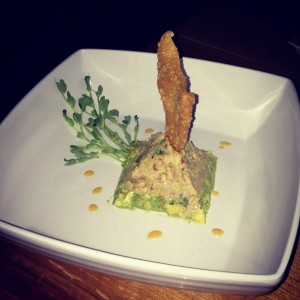 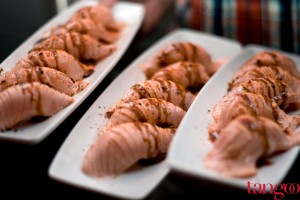 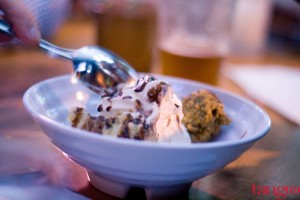 It has been a month in for The General Public, and they are getting busier and busier, most especially during the weekends. The neighbourhood is definitely embracing them, and for anyone looking for an unpretentious, unique and cool place to chill and enjoy with friends and family, this will be the “the destination spot.”

Written and interviewed by Jose Reyes, a restaurant Columnist at Tangoo and contributor to Vancity Buzz. Connect with Jose on Twitter @ModeMondiale.